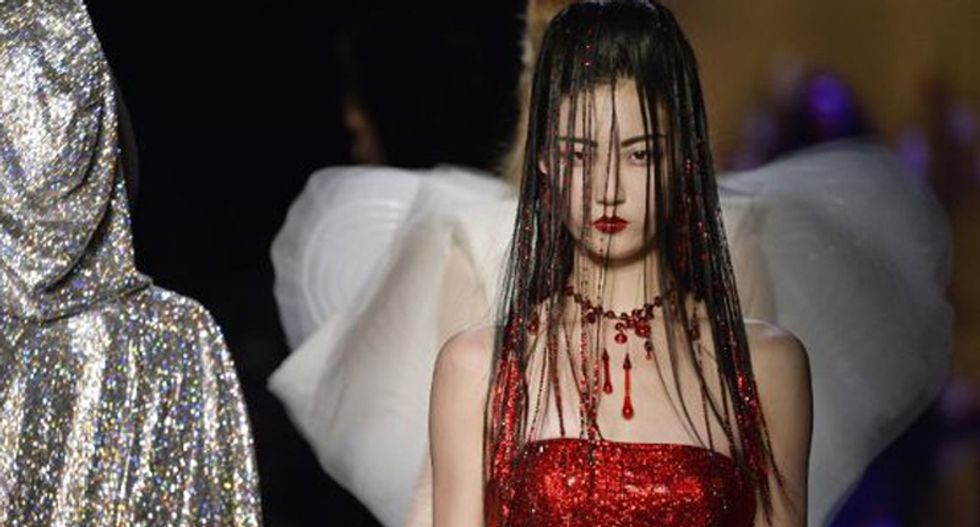 A model presents a creation by Jean Paul Gaultier during the 2014/2015 Haute Couture Fall-Winter collection fashion show on July 9, 2014 in Paris (AFP)

Everyone has their own take on designer Jean Paul Gaultier, who bows out of ready-to-wear fashion in Paris later Saturday in what promises to be one of the shows of the decade.

Pieces such as his sailor's sweaters, jaunty trench coats, corsets and cone bras are today instantly recognisable as Gaultier classics.

But after nearly 40 years in ready-to-wear the 62-year-old designer is to concentrate on couture, citing the relentless pace of the modern fashion industry as the reason for his decision.

"Back then you really had an intense amount of creativity go into the single collection for every season. Today most houses as important worldwide as Jean Paul Gaultier come out with at least 10 or 12 lines a year," she said.

Ready-to-wear was then "the exciting place to be where they created what contemporary French ready-to-wear is -- the incredible shows, the energy, the mixing of all different types of models, menswear and womenswear", she said.

"He really wrote the rules of a whole new game. His vision of low and high culture, his vision of women and men, what is femininity, what is masculinity, what is nationality, what is exoticism. He brought a cultural melting pot into the vocabulary," she said.

The son of an accountant from the Paris suburbs, Gaultier fell into the industry thanks to his grandmother, a beautician who let him leaf through glossy magazines and watch television reports on the fashion world.

Without any formal training, he got his first fashion job in 1970 as an assistant to Pierre Cardin -- one of the earliest believers in ready-to-wear -- after impressing him with his sketches.

He produced his first ready-to-wear collection in 1976, moving into couture in 1997.

Always subversive, Gaultier put real people on the catwalk; he was also the designer who wanted to convince men to wear skirts, once saying: "A man does not wear his masculinity in his clothes. His virility is in his head."

Nathalie Bondil, director and chief curator of the Montreal Museum of Fine Arts, in 2009 persuaded Gaultier to agree to a retrospective of his work, which has now been seen by a million people worldwide.

Bondil said the designer's fashion was an expression of his humanity.

"Jean Paul Gaultier is so open-minded, so tolerant, he has this kind of empathy. He says to you 'be yourself and have fun with fashion'.

"His attitude is very healthy and very important because there is a kind of tyranny of stereotypes and Jean Paul Gaultier is the one who destroys those stereotypes, and always with humour -- there is no morality, just humour," she said.

Designers in Paris this week said it was hard to overstate his influence.

"He's influenced everyone! How do you start? He's had so many different moods over the years," US designer Rick Owens told AFP.

Another designer, London-based Corrie Nielsen, said she had "huge respect" for him, adding: "He's had an incredible career. I mean incredible. He's been a huge inspiration."

In 2001, Gaultier was awarded France's Legion of Honour medal by Pierre Cardin, 31 years after he first hired him.

The designer paid tribute to him saying he had succeeded in calling "into question the criteria of good and bad taste".

He added that Gaultier was a "formidable representative of France and our profession" who had "shocked, bothered, and annoyed" as he revelled the business of designing clothes.