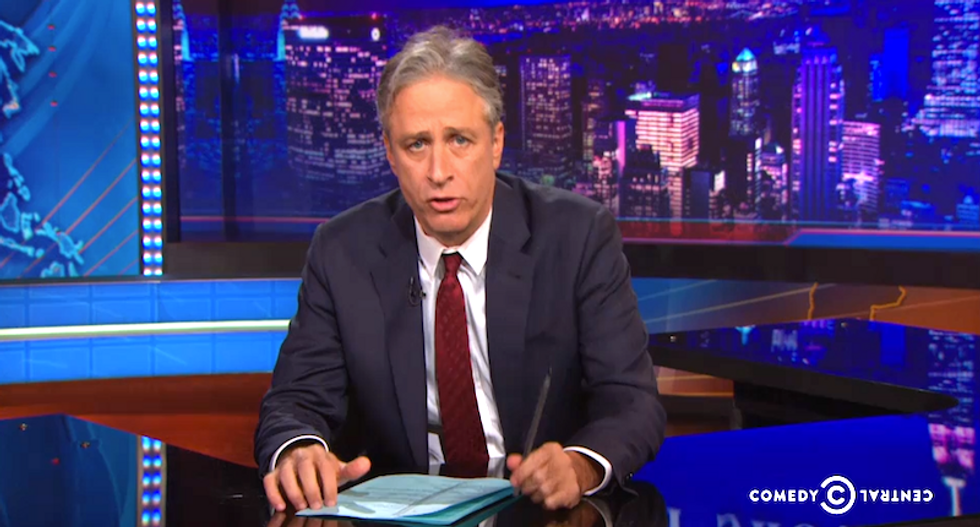 Daily Show host Jon Stewart ripped U.S. lawmakers on Monday for refusing to debate on expanding the country's fight against the Islamic State extremist group -- quite unlike their counterparts in the United Kingdom.

"In a time of war, our congressional inaction is pure political calculation," Stewart said. "Our legislators refuse to debate publicly one of the most crucial issues of our time for fear that we will hear them."

Stewart reached that conclusion after citing remarks by Rep. Jack Kingston (R-GA), who confirmed to the New York Times that Congress members from both parties decided to focus on the midterm elections this year rather than address the thorny topic of another potential U.S. war in the Middle East.

"A lot of Democrats don't know how it would play in their party, and Republicans don't want to change anything," Kingston was quoted as saying. "We like the path we're on now. We can denounce it if it goes bad, and praise it if it goes well and ask what took him so long."

Of course, Stewart said, Kingston was being candid because he lost his bid for re-election in a GOP primary against David Perdue.

"You know what? The rest of you motherf*ckers either get back to Washington and debate and vote on this thing," Stewart said.

While British Prime Minister David Cameron called Parliament back for heavy discussions on whether the U.K. should attack Islamic State, Stewart noted, House Speaker John Boehner (R-OH) fretted about asking U.S. legislators to do the same while they were "out the door."

"Setting aside that thanks to incumbent-favoring incumbent practices, roughly 90 percent of the members who are 'on the way out the door' on these midterms will be coming right back in through the door," Stewart said.