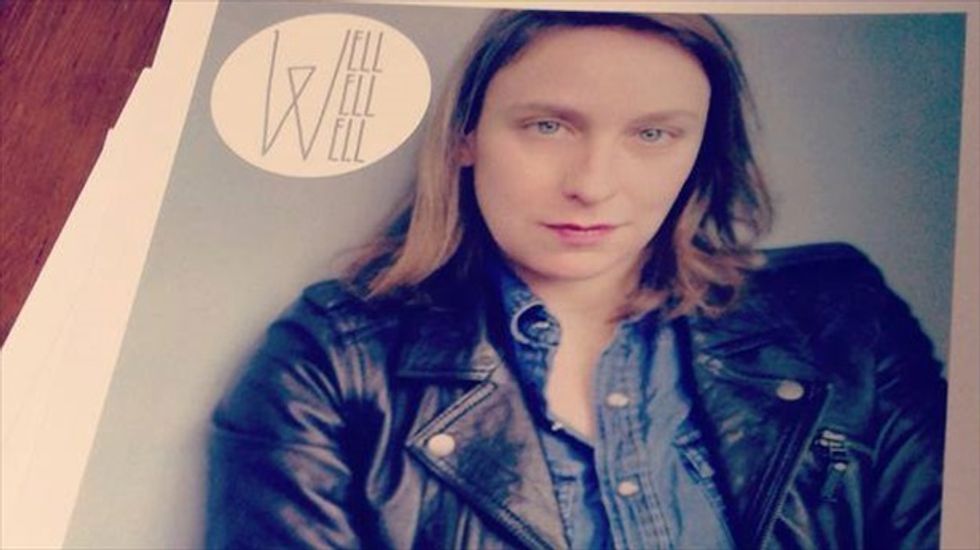 Paris (AFP) - It's crunch time for Well Well Well, a French lesbian magazine out on the newsstands for the first time Friday in a country where lesbians are struggling to get their voice heard.

The first issue features everything from an interview with film director Celine Sciamma -- who came out as a lesbian publicly during the 2007 Cannes Film Festival -- to a comic strip depicting a mother's interest in her daughter's lesbian lover, and where to go out.

With that eclectic offering, the biannual glossy hopes to fill the void left by the closure of three lesbian publications in 2012 and 2013.

"A magazine by and for women who like women seemed crucial to us. Because we have so little visibility. And because practically no one reaches out to us. Too often shunned by the gay press, we are near absent from mainstream media," editor Marie Kirschen writes in the first issue.

Lesbian media emerged in France in the 1970s alongside the feminist movement, but gradually lost steam as the mainstream took over.

In 2012, Lesbia -- which had been going for three decades -- shut down. La Dixieme Muse followed suit and closed in 2013, as did online magazine tetue.com, marking the end of lesbian publications in France.

By comparison, Curve was still going strong in the United States after its 1990 launch and Diva remained active in Britain after a years-long run.

The French lesbian magazines closed just as homosexuality lept to the fore in France as the government pushed through a law allowing same-sex couples to get married, sparking a lively, sometimes acrimonious debate.

But even then, says sociologist Natacha Chetcuti, "gays were given way more airtime than lesbians."

"On the one hand gays are over-visible, on the other hand, lesbians continue to be invisible."

But, she said, the situation was beginning to change.

The controversy surrounding the gay marriage law, for instance, also touched on hugely sensitive issues such as medically-assisted procreation for homosexual couples, which is currently offered only to heterosexuals facing fertility problems.

While the government quickly abandoned the idea of integrating this into the same-sex marriage bill -- which finally came into force in May 2013 -- the issue sparked considerable debate, allowing lesbians a brief step into the limelight.

Then the high-profile Cannes Film Festival awarded Blue Is The Warmest Colour, a film about a lesbian couple, the top Palme d'Or prize.

Earlier this year, Jeanne -- an online magazine for lesbians -- saw the light. And now, Well Well Well is born.

But despite these small in-roads, lesbian media faces an uphill struggle as much-needed cash is hard to come by, says Kirschen.

There is a small pool of readers and advertisers are not always forthcoming.

"The problem in France is that either brands don't want to be associated with gay media, or they don't see gays and lesbians as clients," she says.

And when they do see the potential, they fall into age-old cliches, she adds, pointing to the fact that people "think of gays as well-groomed men who buy lots of moisturising cream while lesbians are women who don't shave and never buy moisturiser."

Kirschen says some advertisers in the United States have no problem targeting gay and lesbian communities.

Oreo, for instance, designed a cookie in 2012 with the colours of the rainbow squashed between the trademark black biscuits, and Absolut Vodka has in the past brought out limited edition multicoloured bottles.

But in France, brands are wary of community-specific advertisements in a country that prides itself on liberty, equality and fraternity and frowns on singling out specific populations.

And while the gay community in France has a hugely famous and rich champion in the person of Pierre Berge -- the partner of late designer Yves Saint Laurent who until last year owned gay magazine Tetu -- lesbians do not.

"Investments have been made in the gay press that were never made in the lesbian press," says Marie-Helene Bourcier, a professor at Lille 3 University and a well-known activist.

"We don't have a lesbian equivalent of Pierre Berge, no one injects cash into the lesbian economy in France."

As such, Kirschen and her team are operating on a "DIY" mode, working for free and distributing the magazine to Paris retail outlets themselves.

They are hoping that people outside the French capital and abroad will order the magazine online. The money needed for printing costs, meanwhile, was raised thanks to crowdfunding.

"We all have a job on the side," Kirschen says.

"We work (on the magazine) in the evenings, on weekends, because we want it to exist."