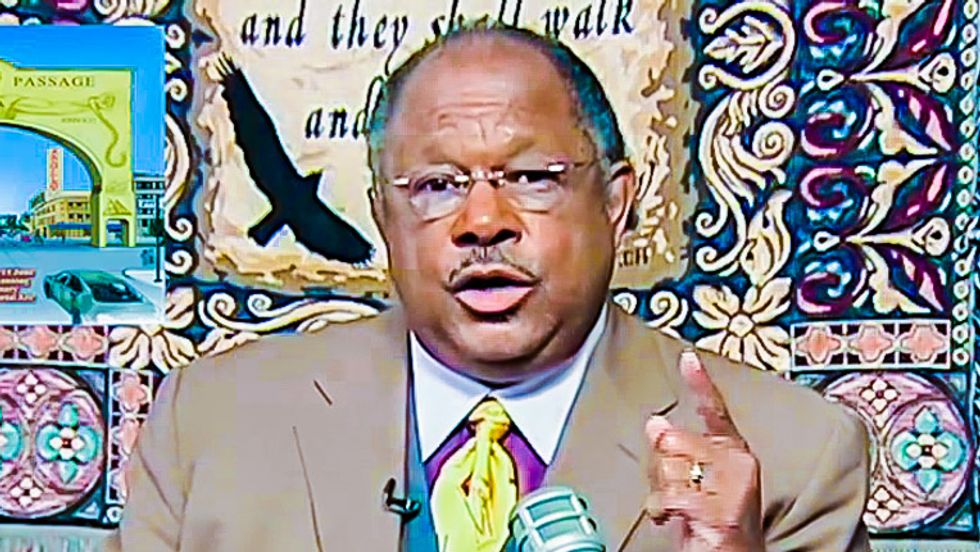 A New York pastor who believes that Jesus would have stoned LGBT people said this week that the NASA Voyager spacecraft's journey through the Solar System verified that homosexuality is perverted.

In a YouTube message to his followers posted over the weekend, Atlah World Missionary Church Rev. James David Manning said that gay Christians were misusing Bible verses to claim that God loved them.

"It makes you wonder about their legitimate place in the universe to think that somehow or another that we're no longer under those laws," he opined, adding that the Earth and the Sun would be destroyed before "sodomy and the abominable practice of man lying with man" was not a sin.

"Any effeminate person will not enter into the Kingdom of God just for acting like a homo," the pastor insisted. "I mean, you just act sweet, you ain't going to Heaven, homie. Read it right there. Read it and weep."

Manning said that the Hubble Space Telescope and NASA's Voyager spacecraft had looked into the universe and proved that "everything has an opposite."

The pastor then explained that demons were convincing LGBT people that homosexuality was normal, which triggered a rant about how life was not created in the rectum.

"There is no life that will come out of a rectum!" he exclaimed. "You cannot produce life, it's only death! There's nothing in a rectum except waste, refuse and death!"

Manning continued: "And without the true, authentic creation that God has put in order, all Sodomites would die! Because there's nothing but death and refuse in the rectum! No life can come out of the rectum! The rectum is designed to get rid of death and waste! It's designed for that one purpose, and the Sodomites are cheering on and praising the rectum!"

In the end, Manning said that his followers should understand that LGBT people were "filled with demons." He advised that it was possible for gay men and lesbian women to be saved by Jesus.

"However, you cannot allow anyone who is a transgender to come into the church," he warned. "Anyone who has cut off their [genitals] cannot enter into the house of God. So, you can't even pray for them. Maybe you can take them out on the street and pray for them that they get rid of the demons that are in them."

Watch the video below from Atlah World Missionary Church starting at about the 13 minute mark.