No sex list: three men no women should have sex with this week/ever 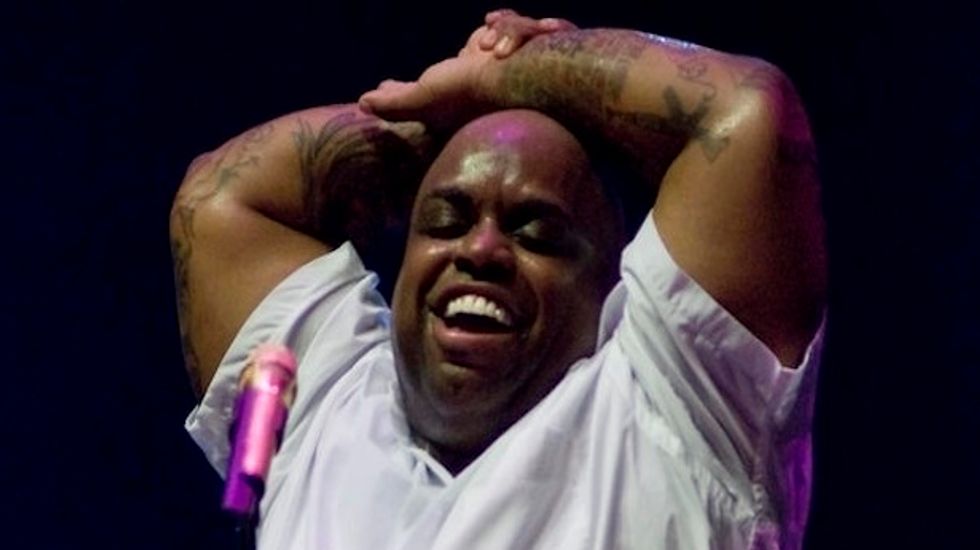 There is a rich and honorable historic tradition of sexual boycott for socio-political purposes. The practice was immortalized by Aristophanes in his comedy Lysistrata, in which the women of Greece abstain from sex to encourage their husbands and lovers to negotiate a peace and end the Peloponnesian War. “Lysistratic nonaction" has been seen more recently in places like the Philippines, Colombia, Liberia, and Ukraine, with varying degrees of success.

Well, ladies, it's time to take active non-action once again. There are some men in the news whose behavior really requires it. I am issuing a non-binding* call for a sexual boycott. It is a crime against not only women, but, I would argue, humanity, to have any sexual relations with these men. Their behavior towards women cannot be sanctioned or condoned through sex. It must be punished through denial. Luckily as you will see from the list, abstaining won't require too much will power.

1. CeeLo Green: Last week, in one of the dumbest statements ever released by a man recently found guilty of drug possession and accused of spiking a woman's drink with ecstasy, the singer CeeLo Green tweeted,

People who have really been raped REMEMBER!!!

If someone is passed out they’re not even WITH you consciously! so WITH Implies consent.

Though I have no doubt that Green, famous for his song , “Fuck You,” has a very nuanced understanding of not only consent but consciousness in a political and neurobiological sense, he is also very in touch with his energy and personal anti-loitering laws. So, he deleted not only his comments, but his entire Twitter account, explaining that he would “not allow that negative energy to loiter on my time line u still got it so keep it! I’m deleting this too.”

Luckily, Green was back online by Monday, and was able to explain that every single person who read the tweets and isn't a rapist or misogynist had taken his statements out of context:

Let me 1st praise god for exoneration fairness & freedom! Secondly I sincerely apologize for my comments being taken so far out of context.

I'm pretty sure the only context that would work would be on which opens with, "this is how to not talk about rape."

2. Larry Wachs: this bald white dude with glasses is the founder and one of the  hosts of the Atlanta talk radio show called "The Regular Guys," whose name makes me think that they are all really secure about their penises. He also prides himself as "one of Atlanta's top Jews." The frequently-fired Wachs has a great sense of humor, as evidenced by his RTing this gem:  "breaking news 'Michael Sam Signs with Lingerie Football League'." Get it? It's funny because Michael Sam is gay. I'm still laughing. Anyway, when actress Mary E. Winstead tweeted, "To those of you looking at photos I took with my husband years ago in the privacy of our home, hope you feel great about yourselves," Wachs replied, ".@M_E_Winstead Stop posing nude on camera, dummy. Your husband not know what you look like nude? #LessonLearned." His dummy accusation was somewhat undermined by the caveman syntax in his last sentence, but moving on. He had similar words of wisdom for Jennifer Lawrence "@itsjenIawrence. Maybe you shouldn't pose nude if you can't handle the public seeing it. #dumdum. And don't step on downed power lines!" I love how he raises the comedic stakes as he replaces dummy with #dumdum.

Also, Wachs may not be that sensitive to the whole naked photos thing because he himself appeared as a nude extra in the comedy “Neighborhood Watch."

3. Republicans. I know. What makes this week different from any other week. Shouldn't Republicans always be forced to suffer blue balls for their sexist policies? YES. But, it's hard to do a full time boycott. I mean, how could someone like Elaine Chao, wife of Mitch McConnell, be expected to control herself?

And I am, after all, a pragmatist. So, I wouldn't encourage a boycott without an outstanding catalyst. Luckily, the RNC tweeted this undeniably dishonest statement on Labor Day:  "This #LaborDay, the White House & Democrats believe paying women less than men is an acceptable practice... All Republicans support equal pay." Unfortunately for the Republicans, reality and facts aren't on their side, not that that's ever been a problem for them anyway. But the RNC can't really spin away the fact that Senate Republicans have blocked a vote on the Paycheck Fairness Act three times! And it's hard to be good on wage equality when you deny that it exists. Meanwhile, President Obama, a Democrat (yeah, I know you call him a socialist... if only) signed the The Lilly Ledbetter Act into law.

*for logistical reasons, not for lack of commitment on my part.