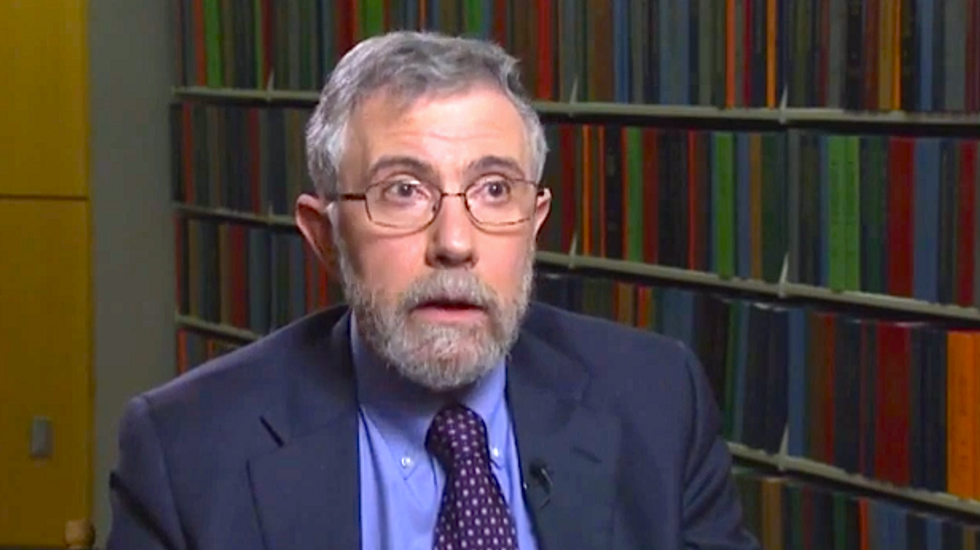 Columnist and economist Paul Krugman has already dismantled conservative arguments that the poor are poor because they are lazy. Today he takes on the topic that is trending in some conservative media: how the rich aren't as moral as they used to be, and that if they'd just stop being such show-offs, things would be better.

This is how conservatives criticize the rich, per Krugman:

Peggy Noonan writes about our “decadent elites,” who make jokes about how they are profiting at the expense of the little people. Charles Murray, whose book “Coming Apart” is mainly about the alleged decay of values among the white working class, also denounces the “unseemliness” of the very rich, with their lavish lifestyles and gigantic houses.

What he doesn't say is that his fellow New York Times columnist, David Brooks, fits very neatly in that trend. Brooks recently wrote a ridiculous, meandering column which included the startling insight that if rich people would just stop buying their kids luxury cars, everything would be better. What we need is a more modest elite.

Is this really the problem? Ostentation as opposed to policies that have systematically widened inequality? Of course not, but in the interest of giving the devil his due, let Krugman just explore whether today's rich are really worse than those of other eras.

I’ve just reread a remarkable article titled “How top executives live,” originally published in Fortune in 1955 and reprinted a couple of years ago. It’s a portrait of America’s business elite two generations ago, and it turns out that the lives of an earlier generation’s elite were, indeed, far more restrained, more seemly if you like, than those of today’s Masters of the Universe.

“The executive’s home today,” the article tells us, “is likely to be unpretentious and relatively small — perhaps seven rooms and two and a half baths.” The top executive owns two cars and “gets along with one or two servants.” Life is restrained in other ways, too: “Extramarital relations in the top American business world are not important enough to discuss.” Actually, I’m sure there was plenty of hanky-panky, but people didn’t flaunt it. The elite of 1955 at least pretended to set a good example of responsible behavior.

But before you lament the decline in standards, there’s something you should know: In celebrating America’s sober, modest business elite, Fortune described this sobriety and modesty as something new. It contrasted the modest houses and motorboats of 1955 with the mansions and yachts of an earlier generation. And why had the elite moved away from the ostentation of the past? Because it could no longer afford to live that way. The large yacht, Fortune tells us, “has foundered in the sea of progressive taxation.”

Never fear, the yachts and mansions are back. Progressive taxation is out.  In 1955, by contrast, "the 400 highest-earning Americans paid more than half their incomes in federal taxes, but these days that figure is less than a fifth," Krugman writes. "And the return of lightly taxed great wealth has, inevitably, brought a return to Gilded Age ostentation."

Long story short, it's human nature to show off, all the more so in highly unequal societies, people being the status-conscious beings that they are. It's futile and beside the point to chide the rich for this behavior.

Closing line: "So if you think our society needs more humility, you should support policies that would reduce the elite’s privileges."

Are you reading, David Brooks?