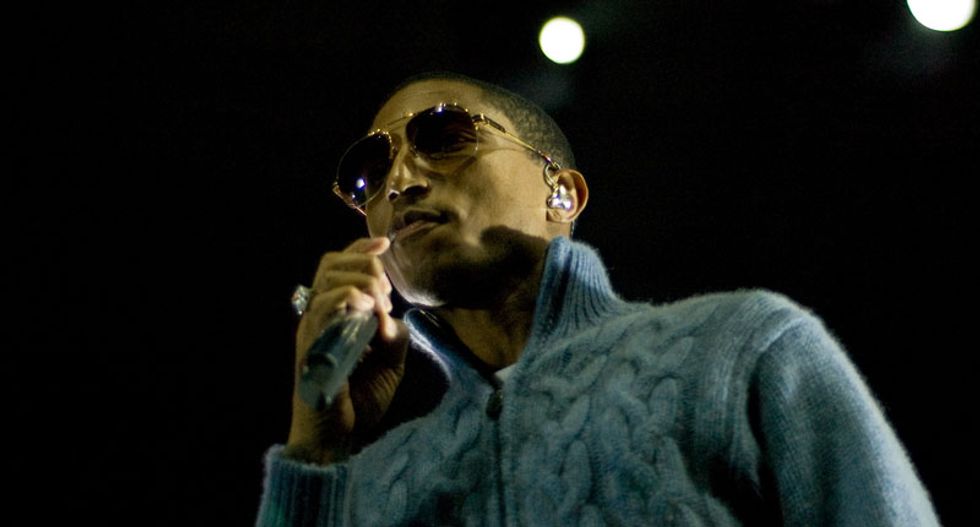 If you were a feminist politician looking for celebrity endorsement, you might not immediately choose Pharrell Williams, co-producer of the controversial song"Blurred Lines".

But on the eve of an election in which the Swedish left hopes to reclaim power after eight years in opposition, the man behind the words "I'll give you something big enough to tear your ass in two" invited the leader of Sweden's Feminist Initiative party onstage at his concert at the Stockholm Globe Arena.

"I hear you guys might actually have a feminist party tomorrow," the dapper US producer yelled out to ecstatic cheers from the audience, before inviting Gudrun Schyman up on stage on Saturday night.

"Let's give women a shot for once in a while to try to run this world," he declared, before launching into his global hit "Happy" while the 66-year-old sashayed along.

Since producing Robin Thicke's "Blurred Lines" turned him into a feminist hate figure, Williams has spent much of this year trying to repair the damage.

In June, he called on fans at London's O2 Arena to start "voting different" to end wage discrimination against women, and in May he told Channel 4 that he longed for a female president.

On Saturday night, his understanding of feminism still seemed unusual. "If you know you were born out of a woman's body, make some noise!" he called out. "Somehow I feel that with you in position we won't have to worry so much about terrorism any more. You guys make life not take life."

Schyman, a political veteran with a strong following among young, leftwing voters, hopes on Sunday to make her party the first feminist party outside Iceland to win seats in a national parliament.

The decision to back Williams has generated criticism from some Swedish feminists.

"It is not as if we support the songs he does," Schyman said after the event. "It was instead he who wanted to support us, and that I thought was very nice."

Teaming up with the US star is a typically risky gambit for the politician, a talented self-promoter who relaunched her party four years ago by burning 100,000 Swedish krona (£8,630) in protest at the wage difference between men and women.

Schyman was one of the most popular contestants in Let's Dance, Sweden's version of Strictly Come Dancing, in 2010, and has the backing of Swedish pop stars such as Robyn, The Knife, and Benny Andersson from Abba.

Andersson, a major financial donor, last month called on his fellow Swedes to vote for the party in a video posted on Fi's website.

If Schyman's party fails to get into parliament, it will strip more than 3% from the leftwing vote, weakening the position of the Social Democratic party in forming the next government, increasing the chance of the far-right anti-immigrant party winning a pivotal position in parliament, and even potentially keeping the centre-right Alliance in power for an unprecendented third term.

A poll late on Saturday put the gap between the centre-left, excluding Fi, and the four-party Alliance at just three percentage points.