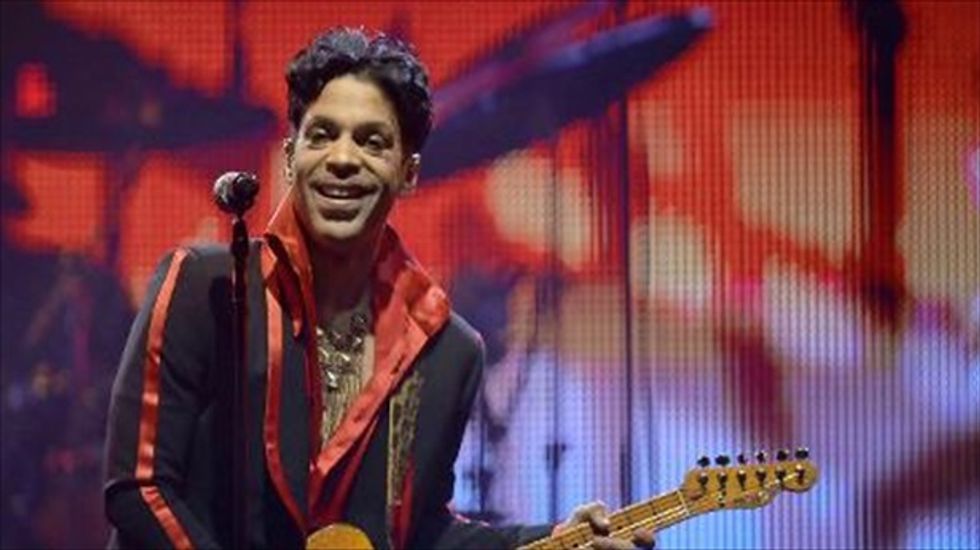 US artist singer and songwriter Prince performs on stage during his concert in Antwerp Sportpaleis, on Nov. 8, 2010 [AFP]

As the funky bass quiets down near the start of one of Prince's two new albums, a soothing female voice informs that medication has put him in "suspended animation" for 45 years.

Is the 56-year-old megastar speaking of his own career, or does the song imagine his body being frozen? No matter -- the voice explains that he is now "in a place that does not require time."

The themes of science fiction and timelessness -- as well as plenty of sex -- run throughout the album "Art Official Age" as Prince, still prolific and genre-merging four decades into his career, brings in funk, rock and soul.

Along with "Art Official Age," Prince is simultaneously releasing a second album: "Plectrumelectrum," a tighter and at times more hard-charging work performed with his new collaborators 3rdEyeGirl, an all-female trio.

The singer who performed 1980s smash hits such as "Little Red Corvette," "1999" and "I Would Die 4 U" recently told his hometown newspaper, the Star Tribune of Minneapolis, that he was focused on albums and had little interest in singles.

"I've finally got something that is a cohesive statement," he told the newspaper, which said that Prince -- true to his eccentric reputation -- initiated the interview at a moment's notice by inviting a reporter to his Paisley Park studio late at night.

"I don't need to be on the radio," he was quoted as saying. "I've been on the radio all my life."

Prince's 33rd and 34th albums -- Prince's first since "20Ten" was distributed four years ago for free in European newspapers -- mark his return to Warner Brothers Records after one of the music industry's most famous label disputes.

When he fell out with Warner Brothers nearly 20 years ago, Prince wrote "slave" on his cheek to protest his contractual terms and changed his name to the unpronounceable "love symbol" as the singer -- born as Prince Rogers Nelson -- said that the label had taken over his name.

Under the new deal, Prince has regained control over his catalog and Warner Brothers is reissuing his classic album "Purple Rain" for this year's 30th anniversary.

"I never wanted a typical life / Scripted role for a trophy wife / All I ever wanted is to be left alone," he sings.

Prince reaches back to bass-driven funk on tracks "The Gold Standard," "Breakfast Can Wait" and the poppier "This Could Be Us" -- which, true to the album's motif, brings a futuristic element to Prince's raw sexuality.

"Sex with me ain't enough / That's why we got to do it metaphysically," sings Prince, who appears on the cover of "Art Official Age" sporting shades that cover a third eye, a mystical concept in Indian tradition.

On the other album, "Plectrumelectrum," Prince and 3rdEyeGirl move forcefully into new directions in the course of songs. "Boytrouble" moves from a funk groove to hip-hop while "Aintturninround" climaxes into guitar riffs that would not be out of place in heavy metal.

Both albums feature the track "Funknroll," with the versions indicative of the albums' styles. "Funknroll" on "Art Official Age" would suit an arena show, while on "Plectrumelectrum," the song feels like it's being played at a small, seated gig.

On "Plectrumelectrum," Prince shows that he can still master a powerful ballad in "The Breakdown." After disclosing, "This could be the saddest story ever been told," Prince's voice soars to his dramatic extremes.

"Give me back the time / You can keep the memories," he sings of lost love. For all of Prince's sci-fi experimentation, he still has a keen sense of time.