RI candidate lights up in ad : 'We've been lied to' by the government about pot 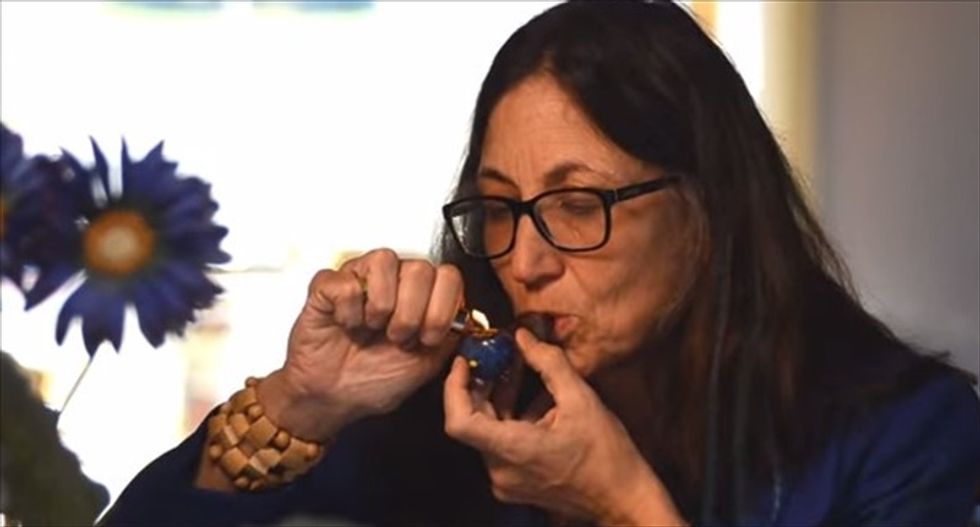 A gubernatorial write-in candidate in Rhode Island highlighted her support for medical marijuana in a new campaign video by admitting to using it and smoking from a small pipe on camera, the Huffington Post reported.

"Yes, I do smoke cannabis, and yes, I do inhale," Compassion Party candidate Anne Armstrong says in the video. "It helps me. It helps me to focus, it helps to facilitate communication."

State law currently allows for medical marijuana to be used to treat illnesses like cancer, Hepatitis C, glaucoma, HIV and AIDS, and certain kinds of "chronic or debilitating diseases."

But in a speech at the "Boston Hemp Fest" earlier this month, Armstrong said that if elected, she would make growing and using marijuana completely legal.

"I hope that you will read and open your eyes and realize the truth: that we've been lied to a long time by our government," she says in the video. "And something that's been essential to our health has been taken away from us, and that's why people get sick from cancer. That's why they get sick with a lot of chronic degenerative diseases -- because they've been deprived of cannabinoids. Our bodies need them."

A study released by researchers in Spain late last year found that cannabinoids -- the active ingredient in cannabis -- can enhance chemotherapy treatments by targeting cancer cells without putting regular cells in danger.

The only two candidates listed on the state ballot this year are Democratic Party candidate and state Treasurer Gina Raimondo and Cranston Mayor Allan Fung, who is representing the Republican Party.

The Compassion Party states on its website that the sole purpose of government should be to implement the goals of the Constitution, which the party believes to be "to improve the condition of humanity and increase the happiness of all individuals."