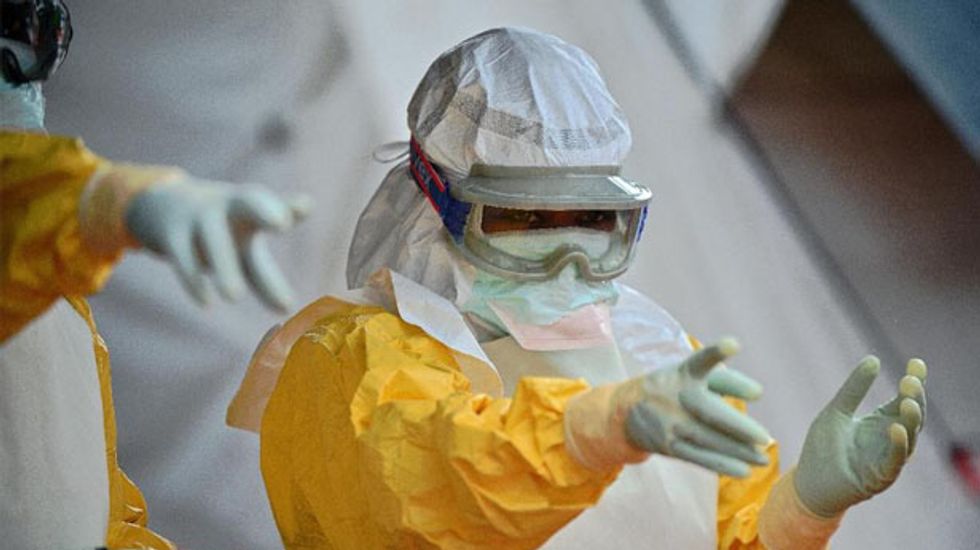 The microbiologist who co-discovered the Ebola virus in 1976 has urged David Cameron to support a "quasi-military intervention" to stop the current epidemic, which is spreading unchecked in west Africa.

Professor Peter Piot, the director of the London School of Hygiene and Tropical Medicine, said the outbreak was now so bad that a UN peacekeeping force ought to be mobilised in Sierra Leone and Liberia with huge donations of beds, ambulances and trucks as well as an army of clinicians, doctors and nurses.

"At the moment, I'm not so optimistic, I'm pessimistic about how to control it. It's one thing to isolate patients or put a small village or town in quarantine; it's another thing when entire countries are affected," he said. "This requires a state of emergency and a kind of quasi-military intervention and it's not my style to exaggerate."

He said the US and UK efforts were good, but not good enough. "It's all going far too slow; I think there's still no sense that this is an absolute emergency and catastrophe," he said.

Describing the "formidable management challenge" that lies ahead, he said the biggest question for him was what would happen if the disease spread to "megacities" in Nigeria, where there have already been seven deaths from 19 confirmed cases.

"One of the reasons for this being out of control is because of the slow response both from the national community and the international community, with the exception of Medecins sans Frontières," he added.

Piot, who has worked at the UN and the World Health Organisation, said the Ebola outbreak was discussed at a meeting of the government's Cobra national emergencies committee last month, so he knew David Cameron had been briefed on the problem.

He said: "I call on the government and the prime minister to intensify the country's efforts and provide assistance, and to accelerate it also."

He said Cameron should sanction the release of up to 100 doctors and nurses from the NHS to go to Sierra Leone and Liberia and called on the UN to put an international emergency programme into action. "There is no way that the three countries effected most can handle this on their own," he said.

In an interview with the Guardian, Piot also called on British Airways and other airlines including Air France to resume flying to the two countries, saying the closure of services this summer "has not been helpful" to the aid effort.

He said security could be guaranteed if passengers were screened before they boarded.

A Belgian now based in London, he helped identify the virus in Zaire 38 years ago but never thought he would see an outbreak of this scale. It has already affected four countries and has claimed around 2,300 lives, more than the combined total of all previous outbreaks.

Piot, who is working hard behind the scenes to provoke a sense of urgency at government levels, said the head of the UN's peacekeeping operations in Liberia had already offered to assist, but that they needed training.

"I was in contact with them and they said 'we are not trained for that, we do not know how to do this'," he said. The African Union has also offered to get involved on a military level, but again needs outside help from experts in infectious disease containment.

"This is an enormously complicated logistics job. Frankly, the military, together with DHL and so on, and companies who do transport and delivery, they would be extremely useful."

He urged the UN High Commission for Refugees to get involved and other agencies who deal with disasters including the International Rescue Fund, chaired by David Miliband. "I think they should get involved, absolutely," he said. "They are the ones with most experience to organise and mobilise on a large scale in a minimum of time, [as well as] the military.

"I think the NHS and universities can help. We should make it possible for nurses and doctors who wanted to do this and want to work in an organised way, like through MSF, to go."

A team of up to 100 would have huge impact, he said, and would not compromise the NHS.

"This should be the last epidemic of Ebola where all we have is quarantine and isolation," Piot said. "What we need the next time are stockpiles of drugs or treatments or vaccines in countries where undoubtedly the virus will resurface."