Self-driving cars starting to communicate with each other 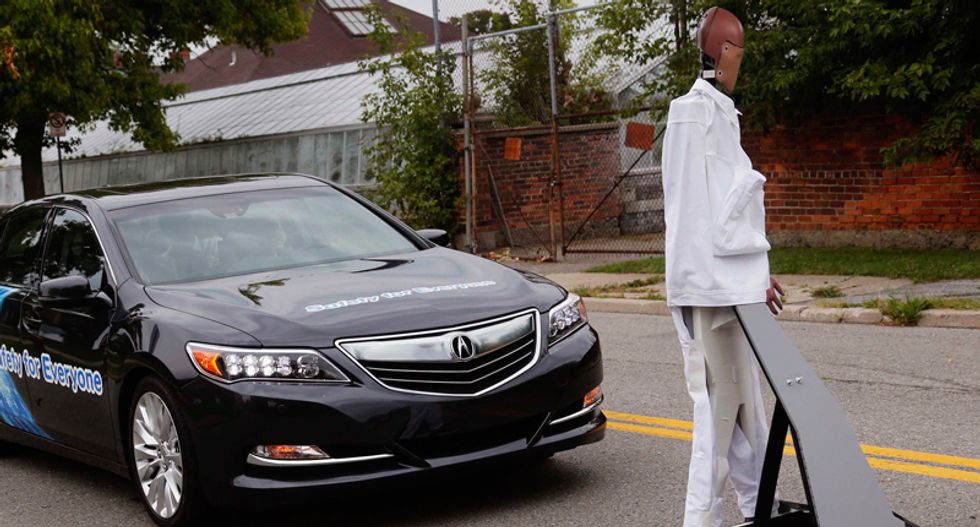 An Acura RLX sedan demonstrated an unusual way to tow another car this week: the vehicles were not physically attached. The second car drove itself, following instructions beamed over by the first in a feat of technology that indicates a new stage in automation is happening faster than many expected.

Systems that enable vehicles to communicate with each other have been developed in recent years in parallel with features that enable cars to drive themselves. Manufacturers and suppliers now are putting the two together in novel ways, with broad implications for vehicle safety and convenience.

General Motors Co, Honda Motor Co, which owns Acura, and other automakers are working with traditional suppliers and startup firms. Tech giants Google, with its pioneering work on driverless cars, and Apple, which is working with automakers to embed greater connectivity in their cars, are accelerating the change.

"It is the mix of big companies -- Apple, Google, the automakers and the data aggregators -- that starts to create momentum. Two years ago, it was different. It was a promise. Today, it’s reality," said Laurens Eckelboom, executive vice president of business development at Parkmobile, a smart-parking startup whose investors include BMW AG and Ford Motor Chairman Bill Ford's venture capital firm Fontinalis Partners.

A "truck platooning" application by Peloton Technology, a startup based in California's Silicon Valley, is intended to save fuel and reduce collisions.

As with virtual towing, a "platoon" of two heavy trucks use wireless communication and computer-controlled braking and acceleration to keep in close formation on the highway, according to a description by the company, which expects to start selling the technology late next year at $2,000 per truck plus a share of the projected operating savings.

The total price tag for widespread adaption of such features could be steep. The National Highway Traffic Safety Administration estimates automakers will need to spend billions of dollars to install safety systems that automatically assist drivers and could be mandated by 2020, when the industry expects the first self-driving cars to start easing onto roads.

There are other risks and issues including reliability, cybersecurity and legal liability.

"What happens if a self-driving car gets into an accident? Who is liable for the damages? Will the human ‘copilot’ be at fault or will the car’s manufacturer?," the Center for Insurance Policy and Research wrote last month, citing "a long list of safety and legal issues to iron out before self-driving cars hit the road.”

All the razzle-dazzle technology promised by automakers and regulators "shouldn't take our eyes off the prize -- cars that don't crash," Jon Lauckner, GM's chief technology officer, said at the Intelligent Transport Systems World Congress in Detroit this week.

Citi analyst Itay Michaeli said the convergence of connected and automated technologies also has the potential to reduce vehicle emissions and fuel usage, and bring down vehicle operating and insurance costs.

Active safety, including hands-free driver assistance and accident avoidance, was a common thread of many technical discussions and technology advances on display at the ITS show, which attracted 10,000 engineers, scientists and researchers, ending on Thursday.

Automakers are starting to put more of the new technologies on the road "to get some experience and see how the market reacts in advance of the government requiring it," said Jeff Owens, Delphi Automotive chief technology officer.

Price is still a big question. Some advanced systems could cost two to three times more to develop than early adopters are likely to pay, several industry insiders estimated in conversations at the show.

Even with just a few semi-automated systems installed, the price tag remains stiff, although recent studies have shown car buyers are willing to pay about $3,000 to have hands-free driving capability.

The Chrysler Group, a unit of Italy’s Fiat SpA, is charging nearly $3,500 for a technology bundle on its new 2015 Chrysler 200C sedan that includes adaptive cruise control, which automatically applies brakes and throttle to keep a vehicle a safe distance behind the one ahead; lane departure warning with lane keep assist, which automatically redirects a vehicle that is drifting out of its traffic lane; blind spot and cross path detection, which helps the driver monitor the presence of vehicles, and automatic park assist.

GM's Cadillac brand hasn't said how much its new Smart Cruise system will cost when it debuts in about two years. The system is designed to enable hands-free driving on the freeway with automatic steering, braking and throttle, as well as using GM's OnStar system to provide location, weather and traffic information to the automated systems.

But drivers should not expect to take a snooze. "We are talking about 'automated' driving features, not autonomous driving," with Smart Cruise, warned spokesman Jim Cain. "We will have strategies in place to keep the driver alert and engaged."