'Tale of Two Cities:' New York has become the capital of economic inequality 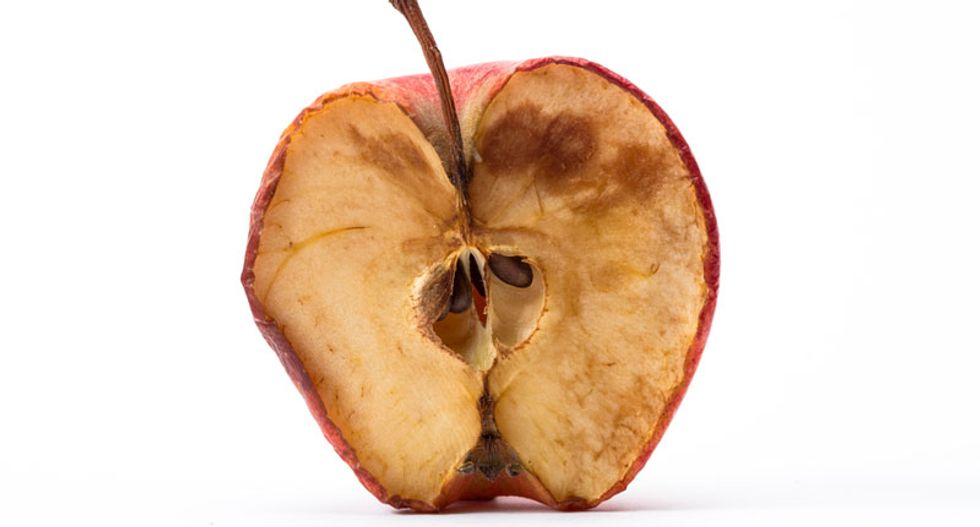 Half a rotten apple (Shutterstock)

This story first appeared at BillMoyers.com.

New York City is a microcosm of America’s rising economic inequality — and of the lopsided nature of the “recovery” that officially began in 2009, the one most working people have yet to experience.

On Wednesday, Sam Roberts reported for The New York Times that “Manhattan is becoming an island of extremes.”

The mean income of the top 5 percent of households in Manhattan soared 9 percent in 2013 over 2012, giving Manhattan the biggest dollar income gap of any county in the country, according to data from the Census Bureau.

The top 5 percent of households earned $864,394, or 88 times as much as the poorest 20 percent, according to the Census Bureau’s American Community Survey, which is being released Thursday and covers the final year of the Bloomberg administration.

“The recovery seems to be going to those at the top, much more than those in the middle, while those at the bottom may even be losing ground,” said Andrew A. Beveridge, a sociologist at Queens College of the City University of New York. He attributed the disparity to the surging costs of housing and the lack of housing subsidies and other forms of public assistance available to many needy families….

In Manhattan, the ratio between the top 20 percent and the lowest 20 percent fluctuated around 36 since 2006, but has soared more than 7 points since 2012.

The citywide poverty rate remained stalled at about 21 percent. About 1.7 million New Yorkers were living below the official federal threshold for poverty, with the biggest numerical increase among New Yorkers who are 18 to 64 years old.

In the metropolitan area, more people were living below the poverty threshold in 2013 than the year before.

New York is truly “a tale of two cities,” as New York Mayor Bill de Blasio often says. Its poverty rate is 6.5 points higher than the national average and 1.8 million people — around one in five — require food assistance to get by. Almost one in three of the city’s children live in poverty. In March, the New York Daily News reported that the city’s 1,000 food pantries — which help feed 1.4 million New Yorkers — are straining to keep up with steadily increasing demand. When Congress reduced the supplemental food stamp budget at the beginning of the year, the city’s grocery stores felt the pinch in their bottom lines.

At the same time, those at the top of the ladder have seen their incomes spike, and are driving up prices throughout the city. “Sports car sellers and Hamptons beach house realtors rejoice: Wall Street bonuses hit their highest level since 2007,” reported USA Today in March. The tech industry also is booming; according to an April report by the New York State Comptroller, tech employment grew by 33 percent between 2009 and 2013, and in 2012, those jobs paid an average of $118,000 per year. Tourism and entertainment are also booming.

The question is who will be around to serve the city’s economic elites that $14 glass of cabernet or show them to those great seats at Yankee Stadium (average “premium” ticket price: $305.29)? Where will that person live? How will he or she raise kids in the city that never sleeps? Median rental costs in Manhattan have increased for six consecutive years, and now stand at just under $4,000 per month. And you won’t find that much relief heading to the boroughs; the median rent in Brooklyn is now $3,172, and in Queens it’s $2,934. Owning a home is just a fantasy for working New Yorkers: The average cost in the five boroughs rose six percent between the second quarters of 2013 and 2014, and now stands at $826,000.