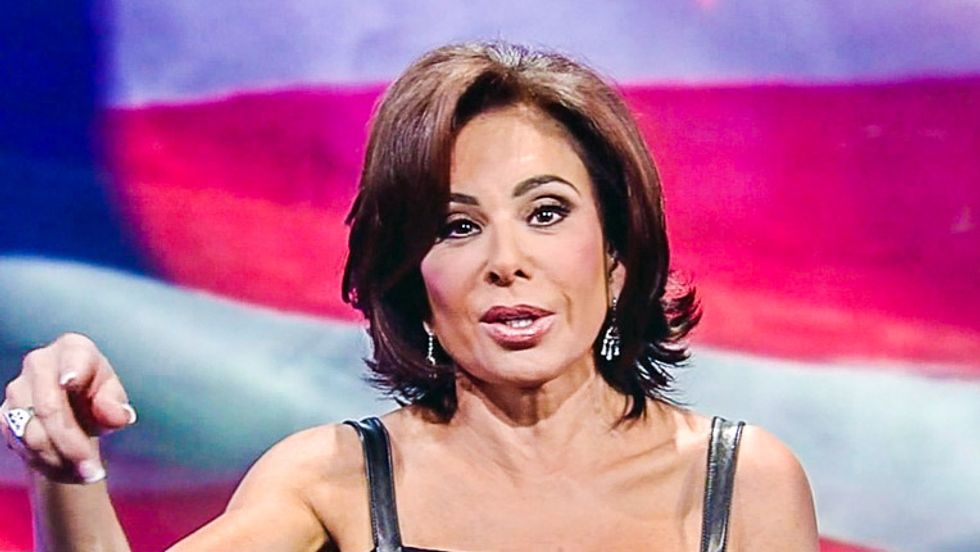 Fox News host Jeanine Pirro dedicated all of her Sunday show to the growing danger of ISIS, and how viewers should prepare to fight Islamic terrorism on U.S. soil.

After 45 minutes of talking to Fox News contributors about the fight against ISIS -- and how President Barack Obama was bungling the effort -- Pirro brought on former Navy SEAL Larry Yatch for advice on how Americans could "protect themselves against terrorist attacks on our own soil."

Yatch said that it was important to have a plan of action, and to prepare in advance with the right equipment.

The former SEAL recommended that everyone prepare a "go bag" with food, and the ability to filter water. Women who wore high heels to work, also needed to carry other shoes in case of attack, he said.

Yatch said that viewers should pack "comfort items" for sleeping and charging their mobile phones, and a knife for defense.

Following a commercial break, Pirro opined that President Barack Obama's plan was "anyone can enter" the country, and she shared advice from viewers who were preparing to fight terrorism in their communities.

"I know my family takes the threat of ISIS seriously, we are locked and loaded," a viewer name Angie wrote.

"Our shores and borders have already been penetrated," Ray wrote in. "Every one of us has to be vigilant in our neighborhood, and on our jobs."

"If the Obama administration won't do it, we Americans must band together to protect ourselves from the terrorism here on our soil," Ann told Pirro.

"I am locked and loaded, let them in if they can get past my guns," a viewer named Wendy said.

Felicia said she was preparing with a three month supply of food storage, 1,000 rounds of ammunition, and she was living "as normally as I can."

Susan wrote in that she had been "practicing at the gun range, and I just bought myself a pretty pink pistol."

Pirro added that viewers needed to stock up on ammo before Homeland Security hoarded all of it.

Carol advised that she was "target practicing and praying," and Jason said that he was purchasing "a gun or two -- can't depend on the current government to protect me."

Watch the video below from Fox News' Justice With Judge Jeanine, broadcast Sept. 28, 2014.