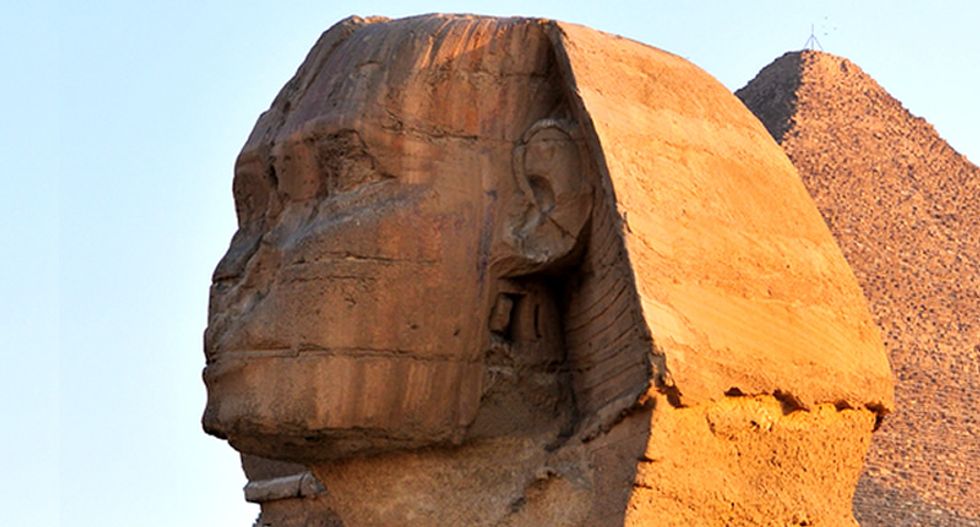 "The Sphinx of Giza in Cairo, Egypt. The Pyramid Fields from Giza" on Shutterstock

Everything is made of something. Take away concrete, glass, textiles, metal, and the other materials from our lives and we are left naked, shivering in a muddy field. The sophistication of our lives is in a large part bestowed by material wealth, we would quickly revert to animal behaviour without the stuff of our civilisation: what makes us human is our clothes, our homes, our cities, our things, which we animate through our customs and language. This becomes very apparent if you ever visit a disaster zone. Thus the material world is not just a display of our technology and culture, it is part of us, we invented it, we made it and it makes us who we are.

The fundamental importance of materials is made clear from the naming of ages of civilisations – the stone, iron and bronze ages – with each new era being brought about by a new material. Iron and steel were the defining materials of the Victorian era, allowing engineers to give full rein to their dreams of creating suspension bridges, railways, steam engines and passenger liners. Isambard Kingdom Brunel used them as a manifesto to transform the landscape and sow the seeds of modernism. The 20th century is often hailed as the age of silicon, after the breakthrough in materials science that ushered in the silicon chip and the information revolution. Yet a kaleidoscope of other new materials also revolutionised modern living. Architects took mass-produced sheet glass and combined it with structural steel to produce skyscrapers that invented a new type of city life. Plastics transformed our homes and dress. Polymers were used to produce celluloid and ushered in a new visual culture, the cinema. The development of aluminium alloys and nickel superalloys enabled us to fly cheaply and accelerated the collision of cultures. Medical and dental ceramics allowed us to rebuild ourselves and redefine disability and ageing – and as the term "plastic surgery" implies, materials are often the key to new treatments used to repair our faculties (hip replacements) or enhance our features (silicone implants for breast enlargement).

My obsession with materials started as a teenager. I was puzzled by their obscurity, despite being all around us. How many people can spot the difference between aluminium and steel? Woods are clearly different from one another, but how many people can say why? Plastics are confusing; who knows the difference between polythene and polypropylene? Eventually I enrolled in a degree at Oxford University's material science department, went on to do a PhD in jet engine alloys and am now professor of materials and society and director of the Institute of Making at University College London. On my journey I have found a hidden world of makers who create the stuff on which we all rely, from aircraft manufacturers to clothing makers. Materials are at the heart of every company I visit and it is hard not to conclude that although Google and Twitter may dominate technology headlines, and cosmologists may be most popular with the media, materials transformation is still what makes the world go around.

Starting next week in a new series of columns for Observer Tech Monthly I am going to tell the story of stuff. Each month I will pick a different material and uncover the human needs and desires that brought it into being, and decode the materials science and engineering behind it. Along the way, we will find that the real differences between materials are deep below the surface, a world that is shut off from most unless they have access to sophisticated scientific equipment. So to understand materiality is necessarily a journey into the inner space of materials. Pretty much the whole of materials science is concerned with the microscopic worlds. Doing so explains why some materials smell and others are odourless; why some can last for 1,000 years and others crumble in the sun; how some glass can be bulletproof, while a wine glass shatters at the slightest impact. The journey into this microscopic world reveals the science behind our food, our clothes, our gadgets, our jewellery, and of course our bodies.

Take for example, a piece of thread, which exists at the same scale as hair. It is a synthetic structure at the limit of our eyesight that has allowed us to make ropes, blankets, carpets, but most importantly, clothes. Textiles are one of the earliest synthetic materials; when we wear a pair of jeans we are wearing a miniature woven structure, the design of which is older than Stonehenge. Clothes have kept us warm and protected for all of recorded history, as well keeping us fashionable. But they are hi-tech too. In the 20th century we learnt how to make space suits from textiles strong enough to protect astronauts on the moon as well as solid textiles for artificial limbs called carbon fibre composites.

But there is more to materials than the science. Those who make things all have a different understanding of the practical, emotional and sensual aspect of their materials. For instance, we know the sounds of the doors in our houses, and can distinguish between someone leaving or entering from the subtle differences in keys rattling and hinges creaking. As a child I could always tell whether it was my mother or my father coming up the stairs, from the subtle differences in the sound of the creaky stairs. These acoustic personalities of buildings are often overlooked during the design process. Carpet makes a room feel warmer but also changes the acoustic signature of the room. The clickity-clack of high heels and the party they announce are muted; the squeak of rubber tennis soles and the sport they anticipate is banished; the comforting solid thump of sensible shoes on their way to work is no longer proclaimed. Installing carpet is a kind of auditory gag, which may of course be used intentionally for that purpose such as when designers want to create a sense of intimacy and calm. It is this diversity of material knowledge that I intend to capture in these columns.

Because materials are built from atoms, we cannot avoid talking aboutthe rules that govern them, which are described by quantum mechanics. This means that as we enter the atomic world, we must abandon commonsense, and talk instead of wave functions and electron states. More materials are being designed from scratch at this scale, and can perform seemingly impossible tasks. Silicon chips designed using quantum mechanics have already brought about the information age. Silicon is now changing the way we light our homes (light emitting diodes) and harvest energy from the sun (solar cells).

The central idea behind materials science is that changes at invisibly small scales manifest themselves as changes in a material's behaviour at the human scale. It is this process that our ancestors stumbled upon to make bronze and steel, even though they did not have the microscopes to see what they were doing – an amazing achievement. When you hit a piece of metal you are not just changing its shape, you are changing the inner structure of the metal, which is why metals get harder when you hit them. Our ancestors knew this from experience but didn't know why. Nevertheless this gradual accumulation of knowledge got us to the 20th century before any real appreciation of the structure of materials was understood. In these columns I will be championing this skill of making. This is not just because it is the hallmark of human civilisation but because the deindustrialisation of the developed world has devalued making.

Making is not just an economic activity, it is the equal of literature, performance or mathematics as a form of human expression. By eschewing material knowledge we cease to understand the world around us. We wring our hands about climate change or urban sprawl without any recognition that our ignorance of materiality might be the cause. We feel proud of the technological marvel that is a smartphone, and yet we upgrade – ditch one for a newer model – at the first opportunity. We may assuage our conscience by hoping that they are recycled with some technology equal in sophistication to their fabrication techniques but they are not; most are disposed of in industrial blenders.

The ages of civilisation are named after materials precisely because they transformed and shaped society. By distancing ourselves from the act of making,by buying and consuming stuff but never having any experience of their manufacture, the developed world finds itself not to be the illiterate society that education ministers fear, but an unmakerly society. In my view this practical ignorance is every bit as dangerous to a modern democracy as a lack of literacy. By swapping a material and industrial understanding of the world for one based on facts and information, we find ourselves uncivilised in a different way.

This series of columns won't be an exhaustive survey of materials, nor a catalogue of the most important ones. But I will aim to capture the fabric of our lives through materiality. After all, everything is made of something.