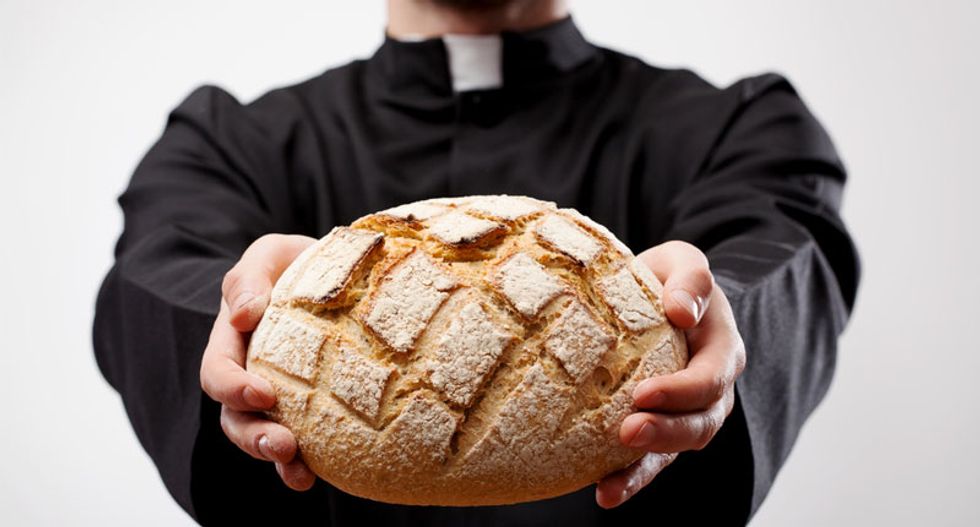 Priest holding loaf of bread as an Eucharist (Shutterstock)

A DNA analysis proves that Holy Communion is a "fraud," according to a hedonistic religious sect that believes humans were created by extraterrestrials about 25,000 years ago.

The Association of Raelian Scientists published a study on October 25 they say refutes the Catholic claim of transubstantiation, in which bread and wine and actually become the physical body and blood of Jesus Christ.

"Nobody can contest a simple DNA test like that conducted by our scientists," Brigitte Boisselier, spokesperson for the Raelian Movement, said in a news release. "Supernatural statements of long-established organizations like the Catholic Church can be exposed for what they are, a poor sham from the Middle Ages that has no place in this new century. All scientists should educate the public."

The Raelian movement was founded in the 1970s by former French auto racing journalist Claude Vorilhon, who changed his name to Rael after a "dramatic encounter" with extraterrestrial human beings. Raelians believe these humans from another planet -- not a divine being -- created all forms of life on Earth.

"Yet there's a very important difference between most atheists and the Raelians: We're still Creationists! The Raelian Movement is an atheistic religion that is preparing humanity to welcome back its true creators, the Elohim, without fear or guilt."

The Raelian researchers collected consecrated hosts from five different Catholic churches in the United States and Canada, and then tested the samples for human DNA.

"But DNA analysis performed on five different hosts collected after the Catholic ritual of consecration showed no DNA change whatsoever in them," Boisselier explained. "The wheat DNA remained wheat DNA, with no human DNA present other than that resulting from contamination caused by human handling of the hosts. This study clearly falsifies the claim that a religious ritual performed by a priest can actually change the substance of a bread wafer into the substance of a human body."

The authors of the study acknowledged they used deception to obtain the consecrated hosts, but said their research was justified because Catholic indoctrination had long-lasting negative consequences.

They also wrote their research was "by no means an attack on religion, but rather a small step in the refutation of superstition and irrational beliefs."

"Religions can have important social benefits, and even more so when they evolve with scientific knowledge and update their claims and beliefs accordingly," the authors concluded.