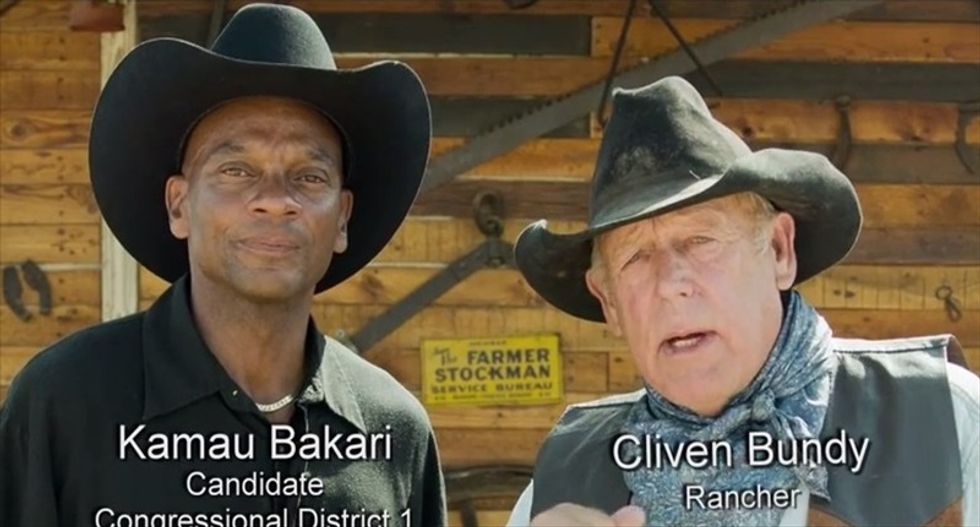 Anti-government rancher Cliven Bundy resurfaced this week in a bizarre campaign ad for a far-right Black Nevada congressional candidate, with both men challenging Attorney General Eric Holder to a debate about racial issues in America.

"This is one white man who's not scared to talk about race," Bundy says in the ad for Independent American Party candidate Kamau Bakari. "I dare you to come to Las Vegas and talk to us."

"And don't give us that 'you're too busy' stuff," Bakari says. "You weren't too busy to go to Ferguson, Missouri."

Bakari is running to represent the state's 1st Congressional District. Bundy and his wife registered as voters with the Independent American Party this past May, following an event celebrating his "courage in standing up for state sovereignty" by refusing to pay grazing fees for his cows' use of federally-owned land.

The ad begins with footage of Holder's February 2009 "nation of cowards" speech regarding racial tensions in the U.S., labeling him as a "race-baiter." It then shifts to a scene of Bakari and Bundy, both wearing "cowboy" attire, complaining about the speech.

"I know Black folks have a had a hard time with slavery and you know, the government was in on it. And the government's in on it again," Bundy tells Bakari. "I worked my whole life without mistreating anybody. A man ought to be able to express himself without being called names."

"I hear you, Cliven, and I believe you," Bakari responds. "A brave white man like you might be just what we need to put an end to this political correctness stuff in America."

Bundy became a conservative media darling earlier this year with his show of defiance toward federal regulations, eventually attracting hundreds of supporters, several of them armed, to his Nevada ranch. However, he was quickly abandoned after the New York Times published his statements regarding "the Negro."

According to Politifact, Bakari is considered a heavy underdog in his race to unseat incumbent Rep. Dina Titus (D). His party platform states that "throughout human history, most men have been slaves to man’s institutions of government" and argues against not only the Affordable Care Act, but "mandatory medication or vaccinations" and collective bargaining agreements for workers.

Watch Bundy and Bakari's campaign ad, as posted online on Friday, below.