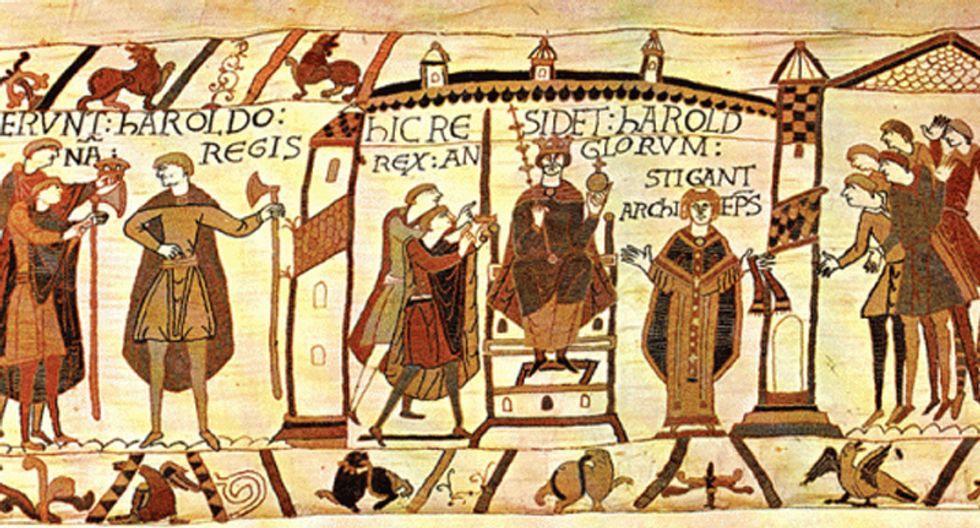 King Harold II, the last Anglo-Saxon king of England, has long been thought to have been killed at the Battle of Hastings in 1066. But British archaeologists are to test a theory he survived on the anniversary of the famous battle this Tuesday.

The battle, on October 14 1066, marked a turning point in British history as the Normans conquered medieval England.

There are different accounts of how he was killed, one of them pictured in the Bayeux Tapestry, which appears to have him gripping an arrow that had pierced his eye.

Another account of the battle, said to have been written shortly afterwards by Guy, Bishop of Amiens, has Harold being killed by four knights and his body dismembered.

But Peter Burke, an amateur historian in southern England, has said an alternative version of events exists in a 12th century document called Vita Harold, which is housed in the British Library.

Burke has suggested Harold may have lived to fight another day and survived as a hermit for a further 40 years.

"We have the Norman story put through the Bayeux Tapestry – the English story is a different one," Burke told The Independent on Sunday newspaper.

"You put things together and it begins to build a picture that is quite solid. If everything backs you up in history, you should look at it. You shouldn't just leave it," he said.

Archaeologists will begin to test his theory on Tuesday, the anniversary of the famous battle, by launching a scan of the grounds of Waltham Abbey Church in Essex, where Harold was supposedly given a burial.

The same geological survey company which successfully helped locate the remains of King Richard III in 2012 beneath a car park will carry out the scan.

"I'm very hopeful we will find something," said Burke. "I've always thought you should question things. You shouldn't just take history at face value. (The Battle of Hastings) is one of the biggest events in English history. Whether it will go as far as rewriting history books, I suppose they'll have to," he said.