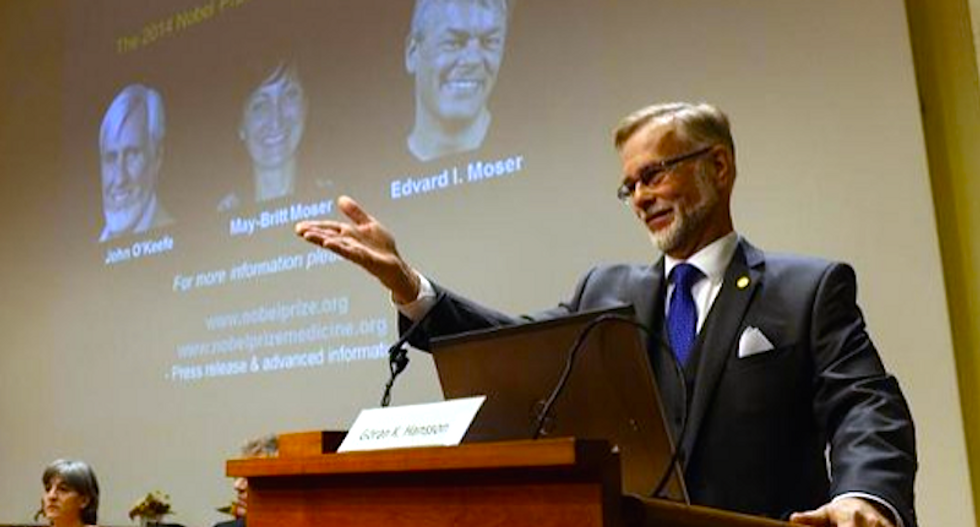 British-American researcher John O'Keefe on Monday won the Nobel Medicine Prize with a Norwegian couple, Edvard Moser and May-Britt Moser, for discovering how the brain navigates.

They won the coveted prize for discovering an "inner GPS" which makes it possible to orient ourselves in space, the jury said.

"The discoveries of John O'Keefe, May-Britt Moser and Edvard Moser have solved a problem that has occupied philosophers and scientists for centuries," it said.

"How does the brain create a map of the space surrounding us and how can we navigate our way through a complex environment?"

In 1971, O'Keefe discovered the first component of this positioning system, finding a type of rat nerve cell in an area of the brain called the hippocampus that was specifically activated when the animal was at a given location in the lab.

This led to the creation of a map of the room in the rat's brain.

More than three decades later, in 2005, a married couple, May-Britt and Edvard Moser, discovered another key component of the brain's positioning system.

They identified a type of nerve cell that generates a coordinate system and allows for precise positioning and pathfinding.

The work has potential benefits in neuromedicine, especially in Alzheimer's, where the positioning circuits of the brain are frequently damaged at an early stage of the disease.

"Knowledge about the brain's positioning system may, therefore, help us understand the mechanism underpinning the devastating spatial memory loss that affects people with this disease," the jury said.

The winners will share the prize sum of eight million Swedish kronor ($1.1 million, 881,000 euros). Half will go to O'Keefe, and the other half jointly to the Mosers.

Last year, the honor went to James Rothman, Randy Schekman and Thomas Suedhof, all of the United States, for their work on how the cell organizes its transport system.

In line with tradition, the laureates will receive their prize at a formal ceremony in Stockholm on December 10, the anniversary of prize founder Alfred Nobel's death in 1896.