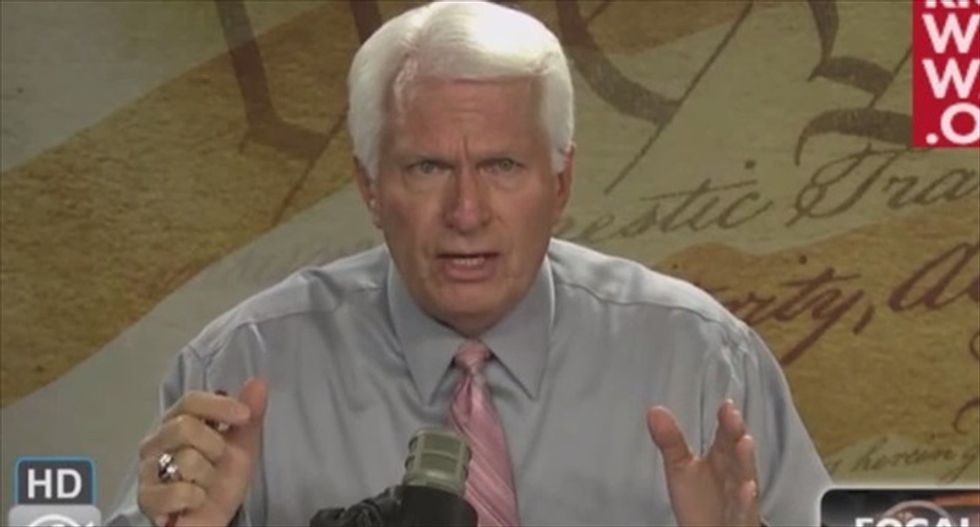 Conservative Christians like the American Fammily Association's Bryan Fischer were up in arms on Monday after the Supreme Court decided not to consider appeals in five states that sought to restore bans on marriage equality.

"This decision not to decide, this action not to act, this represents the de facto Roe v. Wade of sodomy-based marriage," Fischer fumed. "It's gonna be virtually impossible now to stop this press and this push for nationalizing -- imposing -- on every state in the Union marriage that is based on the infamous crime against nature."

As Reuters reported on Monday, the court's rejection of the appeals means that rulings striking down marriage equality bans in 11 states -- Colorado, Indiana, Kansas, North Carolina, Oklahoma, South Carolina, Utah, Virginia, West Virginia, Wisconsin, and Wyoming -- are likely to remain in place, making same-sex marriages legal in 30 states 16 months after the high court struck down the Defense of Marriage Act and California's Proposition 8.

According to Right Wing Watch, National Organization for Marriage (NOM) head Brian S. Brown expressed hope in a statement would revisit the issue, but still called for conservative voters to push for an amendment to the Constitution banning marriage equality.

"The effect of the lower court rulings is to say that a constitutional right to same-sex 'marriage' has existed in every state in the union since 1868 when the 14th Amendment was ratified, but somehow nobody noticed until quite recently," Brown said. "That's the absurd belief we are being told to accept."

"For candidates running in 2014 and those who run for president in 2016, there will be no avoiding this issue," Reed said in a separate statement. "If the Supreme Court is planning a Roe v. Wade on marriage, it will sow the wind and reap a political whirlwind."

Watch Fischer's reaction to the high court's decision, as posted online on Monday, below.