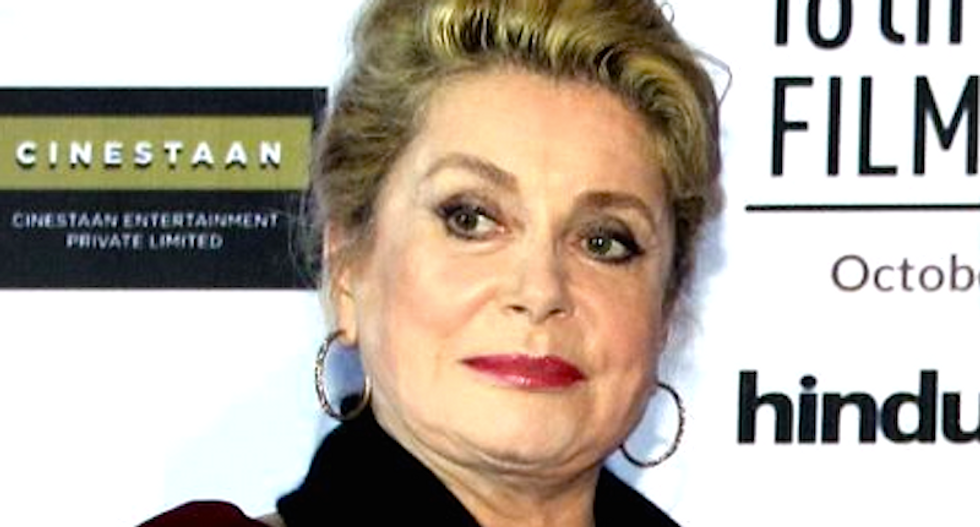 After a glittering half-century career as a French cinema icon, Catherine Deneuve is well used to strangers' attention. But the past few years have thrown up a trend she cannot abide.

"Everybody wants to do these horrible things called 'selfies,'" she tells AFP in a rare interview in Mumbai, elegantly reclined on the sofa in her hotel suite.

Once a target of the paparazzi, septuagenarian Deneuve says today it is fans with smartphones she contends with, who regularly ask to snap her in their self-portrait photographs.

Deneuve, who turns 71 next week, has earned a formidable reputation as the "ice queen" of French films since her breakthrough role in "The Umbrellas of Cherbourg" back in 1964.

But, frustration at selfies aside, she is relaxed and quick to laugh as she talks in India's entertainment capital, where she was presented this week with a lifetime achievement award at the Mumbai Film Festival.

Puffing on slim cigarettes and wearing a short gold-green and black dress, she describes the recognition as "very nice" -- but jokes that such lifetime honours can have the air of a distinguished "burial."

"It's for something that you've been doing, it doesn't mean that it's stopped."

With roles in the 1960s in films such as "Belle de Jour," in which she played a young housewife who works as a prostitute in the afternoons, Deneuve became known as a seductress and one of the world's most beautiful women.

Now the grand dame of French cinema with more than 100 films to her name, she still appears in two or three productions each year, but she believes her reputation abroad is more about her image than her acting.

"In France I'm an actress, I'm still working," she explains.

"When I arrive in some foreign countries I'm seen as a French symbol... a blonde French woman," she says, breaking into laughter again.

She is heading a delegation to promote her country's films at the Mumbai festival, which is holding its fourth annual "Rendez-vous with French cinema."

For the first time this year, the group uniFrance Films is holding special screenings to try and sell French screenplays to Bollywood producers, a lucrative market for remakes of foreign movies.

Deneuve admits to not having seen many Indian films, although she is "curious" and would consider acting in one herself.

"The cinema is so different. They love romantic stories, love dancing," she says.

"I'm sure there are young directors who do films which are not fairy tales or musicals, I didn't have a chance to see that yet."

She is big fan of "a lot" of U.S. television series, with her favorites including "Breaking Bad," "Homeland" and "House of Cards."

Younger actresses she admires include Cameron Diaz, Kate Winslet and Kristen Stewart, but Deneuve herself is in no rush to have a more prominent place in Hollywood.

"I've been offered things that I didn't think were more interesting... than what I'm shooting in Europe, so there's no reason for me to come to America just to shoot in English."

While older women in Hollywood have lamented the lack of good roles for them, Deneuve thinks this is less of a problem in European cinema, where there are fewer "conventions about the appeal of women of a certain age on screen."

"Because cinema is such a big thing in America and it costs so much, they cannot take the same chances as they do in Europe," she adds.

The actress, who has been nominated for a dozen Cesar awards in France and won two of them, secured her only Oscar nomination for the 1992 film "Indochine," in which she played a French plantation owner with an adopted Vietnamese daughter.

She was "very pleased" with the nomination, particularly for acting in a French film, but describes the legwork required to get a nod from the Hollywood Academy as "very peculiar."

"If you want to have an Oscar, or to be nominated for an Oscar, you have to do a lot of work and be very much in America to meet people and do a sort of lobbying," she says.

Deneuve, who now has five grandchildren, says she still has goals she would like to achieve but insists she is more interested in scripts and directors than playing any particular parts.

Despite being the daughter of two distinguished theatre actors, she is yet to follow them on to the stage, although she says "maybe one day" it will happen.

"I suppose also the stage fright is something I fear very much," she admits. "It's a nightmare I have often."