Comet makes close pass by Mars as spacecraft watch: 'This is a really rare event' 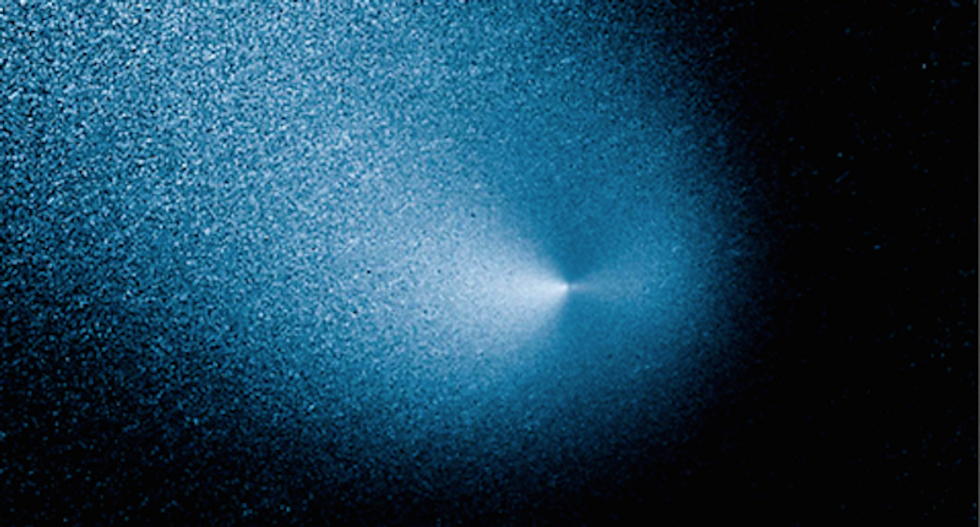 Comet C/2013 A1, also known as Siding Spring, is seen before and after filtering as captured by Wide Field Camera 3 on NASA's Hubble Space Telescope in this image released October 19, 2014. (REUTERS/NASA/ESA/J.-Y. Li/Handout via Reuters)

A comet from the outer reaches of the solar system on Sunday made a rare, close pass by Mars where a fleet of robotic science probes were poised for studies.

Comet Siding Spring passed just 87,000 miles (140,000 km) from Mars, less than half the distance between Earth and the moon and 10 times closer than any known comet has passed by Earth, NASA said.

The comet, named for the Australian observatory that discovered it last year, is believed to be a first-time visitor to the inner solar system, having departed the Oort Cloud, located beyond Neptune’s orbit, more than a million years ago.

Comets are believed to be frozen remnants left over from the formation of the solar system some 4.6 billion years ago.

“This comet is on its way plunging in toward the sun, growing a tail,” astronomer David Grinspoon, with the Planetary Science Institute in Tucson, Arizona, said during a live webcast of the comet’s flyby on Slooh.com.

NASA’s three Mars orbiters and two rovers, as well as orbiters owned by the European Space Agency and India were expected to monitor the comet’s approach and fly-by, which may have left Mars engulfed in a cloud of comet dust.

“The comet has never ever been closer to the sun that we think maybe Jupiter, Saturn, Uranus or Neptune’s distance. This is its first passage into what we call the ‘water-ice line,’ where it’s really starting to blow its water off,” astrophysicist Carey Lisse, with Johns Hopkins University in Laurel, Maryland, told reporters during a press conference last week.

Initially, NASA was concerned the comet’s dusty tail could pose a threat to orbiting spacecraft as it brushes past Mars. Later assessments somewhat allayed those concerns, but NASA still opted to tweak its satellites’ orbits so that they would be behind the planet during the most risky part of the flyby.

"Mars will be right at the edge of the debris cloud, so it might encounter some of the particles, or it might not," NASA Mars scientist Rich Zurek, with the Jet Propulsion Laboratory in Pasadena, California, said in a statement.

Mars’ atmosphere, though much thinner than Earth’s, will shield NASA’s Opportunity and Curiosity rovers from comet dust, which may trigger meteor showers.

Mars also will pass directly through the comet’s coma, which is an envelope of gas and dust surrounding the comet’s nucleus, providing an unprecedented opportunity for study, Grinspoon said. “This is a really rare event.”