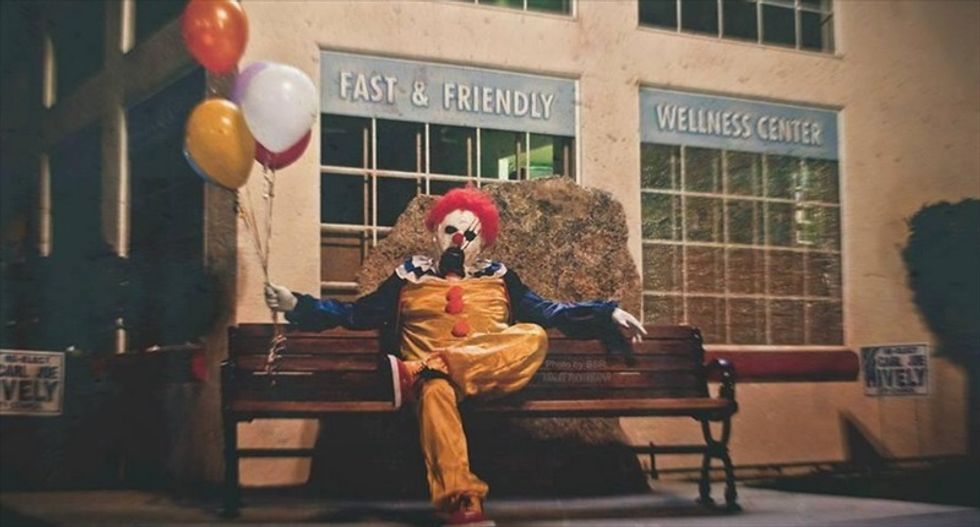 A man identifying himself as the "Wasco clown" told KGET that he began posting ominous pictures of himself dressed in clown masks as part of his wife's yearlong photography project. Wasco is about 28 miles from Bakersfield. The photos gained attention through the "clown's" Facebook page and Instagram account.

One Wasco resident, Noah Sanchez, told KGET on Sunday that community members tried to spot the clown around town.

"Some of the residents go in cars searching for him," he said. "They have flashlights and try and spot him in neighborhoods after he posts to Twitter."

Local authorities said, however, that reports of criminal activity by people wearing clown costumes -- including a rumor that one chased a child with an axe -- were unfounded.

"We have had no reports of any assaults by a clown," Wasco Police Sgt. Ian Chandler said. "Nor have we had any arrests of any clowns at any time I have been here, and I have been here two years."

Though the couple reportedly plans to continue using the account throughout October, the man told KGET that they did not intend to inspire others to follow suit. It is unclear whether they are behind a Twitter account calling itself "ClownWasco," which sent a lewd message to KGET meteorologist Alissa Carlson.

Watch KGET's report on the "Wasco clown," as aired on Tuesday, below.