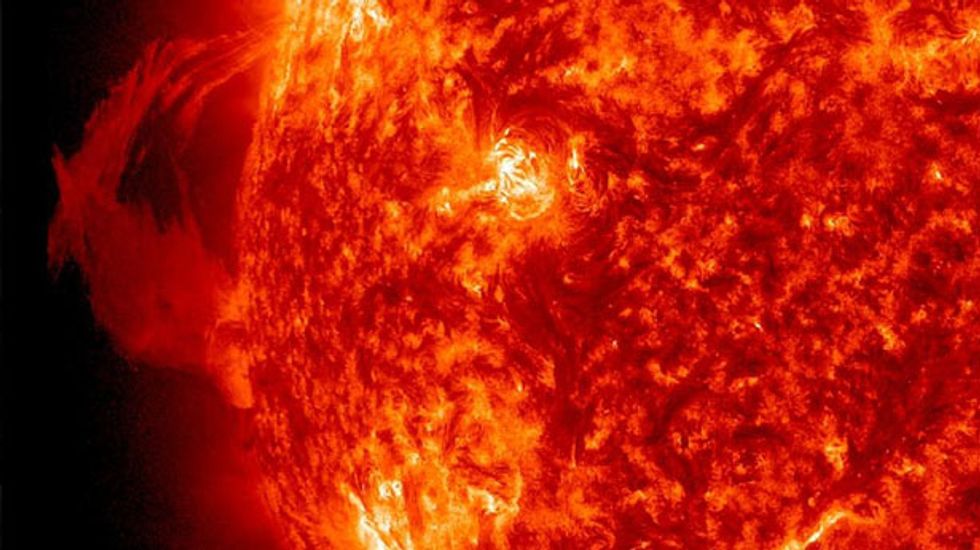 An unusual signal picked up by a European space observatory could be the first direct detection of dark matter particles, astronomers say.

The findings are tentative and could take several years to check, but if confirmed they would represent a dramatic advance in scientists’ understanding of the universe.

Dark matter cannot be seen, but the mysterious substance is thought to make up about 85% of all the matter in the universe. The web of dark matter that stretches through space is believed to give the cosmos its structure, although so far it has eluded direct detection by physicists.

Researchers at Leicester University spotted the curious signal in 15 years of measurements taken by the European Space Agency’s orbiting XMM-Newton observatory. They noticed that the intensity of x-rays recorded by the spacecraft rose by about 10% whenever it observed the boundary of Earth’s magnetic field that faces towards the sun.

Andy Read, an astronomer on the team, said that conventional models of the universe failed to explain the effect. Once galaxies, stars and other bright x-ray sources have been filtered out, he said, the intensity of x-rays in space was expected to be the same whenever measurements were taken.

With no explanation in traditional physics, the scientists looked to more outlandish theories. One seemed to fit the bill. It called for theoretical particles of dark matter called axions streaming from the core of the sun and producing x-rays when they slammed into Earth’s magnetic field.

“If the model is right then it could well be axions that we are seeing and they could explain a component of the dark matter that everyone thinks exists,” Read told the Guardian.

“The variation in background x-rays is solid and really interesting. What could it be down to? Well, we tried all the traditional explanations, but none of those worked, so we went to these more exotic ideas.”.

Martin Barstow, president of the Royal Astronomical Society, said: “This is an amazing result. If confirmed, it will be the first direct detection and identification of the elusive dark matter particles and will have a fundamental impact on our theories of the universe.”

The senior author on the study, George Fraser, died the day after the report was submitted to the journal Monthly Notices of the Royal Astronomical Society. In the paper, he wrote: “It appears plausible that axions – dark matter particle candidates – are indeed produced in the core of the sun and do indeed convert to x-rays in the magnetic field of the Earth.”

Researchers have debated the existence of dark matter since 1933 when the Swiss astronomer Fritz Zwicky noticed that some unseen material exerted a gravitational pull on a distant galaxy. Several experiments are currently searching for dark matter, but none has found concrete evidence for the particles.

“The x-ray background – the sky, after the bright x-ray sources are removed – appears to be unchanged whenever you look at it,” said Read. “However, we have discovered a seasonal signal in this x-ray background, which has no conventional explanation, but is consistent with the discovery of axions.”

“These exciting discoveries, in George’s final paper, could be truly groundbreaking, potentially opening a window to new physics, and could have huge implications, not only for our understanding of the true x-ray sky, but also for identifying the dark matter that dominates the mass content of the cosmos,” he added.

If the Leicester group has detected axion particles, the ghostly entities are incredibly light, with a mass of around a hundred billionth of an electron.

Read said that a similar signal had been detected by Nasa’s Chandra X-ray Observatory. It could take some time to confirm the signal, though. “In a few years, we might be able to double the dataset from XMM-Newton and look at this with more precision,” he said.

Christian Beck, who has worked on axions at Queen Mary, University of London, said: “Dark matter axions, or axion-like particles, could be responsible for this as they can convert to photons in the magnetic field of the Earth. The discovery could potentially be very important.”

“What’s less clear, however, is whether any other explanation of the measured effect can be excluded,” he added. “A true discovery of dark matter that is convincing for most scientists would require consistent results from several different experiments using different detection methods, in addition to what has been observed by the Leicester group.”