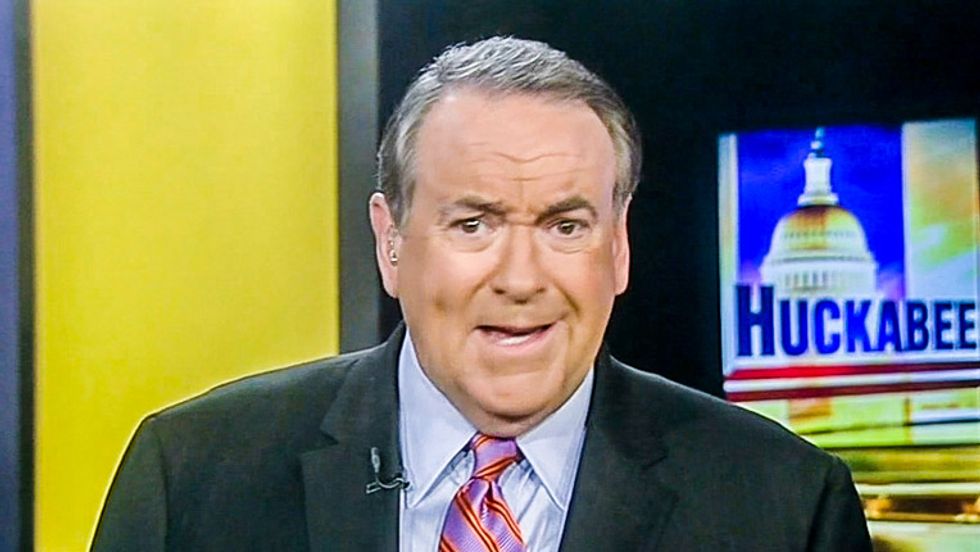 With revelations of contagion among health care workers in Dallas, including one who traveled cross country by plane after being infected, Ebola panic is rising. While the chance of a significant domestic outbreak remains virtually nil, the round-the-clock media frenzy is nevertheless contributing to surging anxiety. So too is the rhetoric coming from the right.

In the immediate run-up to the midterm elections, we’re witnessing fear mongering about Ebola on the southern border from across the conservative spectrum, from fringe figures to relatively moderate Republicans. It should be obvious — though it is not, for reasons I will explore — that once again we are confronting an election conducted largely in dog whistle terms, with pundits and candidates hoping to use racially coded appeals to drive anxious white voters to the polls.

Former Arkansas governor and Republican presidential candidate Mike Huckabee offers this: “When the government says it can’t keep people out of the US, what it means is that it won’t keep people out. And why should we be surprised? We’ve seen our borders routinely ignored. So if someone with Ebola really wants to come to the US, just get to Mexico and walk right in.”

Thom Tillis, the Republican candidate for Senate in North Carolina, used a recent debate to claim that his opponent “failed the people of North Carolina and the nation by not securing our border.” Tillis continued, “Ladies and gentlemen, we’ve got an Ebola outbreak, we have bad actors that can come across the border. We need to seal the border and secure it.”

The preposterous idea of an Ebola victim swimming the Rio Grande fits within a larger pattern of conservatives placing dire threats at the southern border. A few weeks ago, it was ISIS terrorists who were supposedly on the border, for instance with Scott Brown, another Republican Senate candidate, who warned that “[r]adical Islamic terrorists are threatening to cause the collapse of our country,” and then assuring voters, “I want to secure the border, keep out the people who would do us harm.” Adapting to recent events, last week Brown switched out Ebola for ISIS: “people with Ebola and other infectious diseases can enter the country without being challenged,” he claimed.

The “border” is key to decoding these remarks as dog whistles. Clearly Ebola deserves attention and immediate response as a humanitarian crisis of calamitous proportions in three West African countries. The warnings we’re hearing, however, have nothing to do with helping Liberia, Sierra Leone and Guinea, and everything to do with a supposed infection crossing our border — with fingers almost always pointing south rather than north, eliciting fear of surging Latino numbers and the rapid demographic browning of America.

“Disease” is also a core dog whistle. Even before Ebola, disease was imputed to undocumented immigrants, reviving the racial calumny that some races spread pestilence, like rats or roaches. Speaking of the undocumented children who fled here this summer, long-time conservative activist Phyllis Schlafly recently opined, “out of all the things [Obama’s] done, I think this thing of letting these diseased people into this country to infect our own people is just the most outrageous of all.”

Then, adding Ebola to the mix, Schlafly continued that Obama might secretly hope that Ebola becomes widespread here. “Obama doesn’t want America to believe that we’re exceptional,” she contends. “He wants us to be just like everybody else, and if Africa is suffering from Ebola, we ought to join the group and be suffering from it, too. That’s his attitude.”

This stew of disparate elements and outlandish claims verges on self-parody. As the founder of a Latino-issues website, Julio Varela, remarks, “you take the most extreme examples of xenophobic hysteria — Mexicans, terrorists, ISIS, the border crisis and Ebola — and mash them all together to create a new narrative of craziness.”

Yet “crazy” doesn’t mean ineffectual. A survey from this week shows that 57 percent of tea party supporters believe the federal government is not prepared to prevent a major Ebola outbreak domestically, and another survey shows that 71 percent of Republicans are very worried about Islamic extremism in the US. Again, the actual risks here are virtually nonexistent. Meanwhile, another report shows that 56 percent of Republicans are mad at their own party about immigration, overwhelmingly because they feel that the GOP is not taking a hard-enough stand against undocumented immigrants.

It seems that those spreading panic about Ebola, ISIS and the southern border hope that their new rhetoric will reinvigorate an old tactic: racial dog whistling. It has never been bigotry amid politicians that drives this, so much as the cold calculation that stimulating racial panic can win votes. And as they have before, many within the GOP seem to be banking that it will work again.

But for all the evidence that conservatives are whipping up their base with racially-charged narratives, there has very little criticism of this racial pandering. Why not?

It’s not as if the scare rhetoric has gone unnoticed; on the contrary, The New York Times recently put it on the front page, The Washington Post criticized the Republicans’ “doom-and-disease chorus,” and “Meet the Press” as well as ABC’s “This Week” dedicated panel discussions to fear mongering — yet these venues made no mention of race.

And it’s not as if progressives are timid about indicting dog whistling when they recognize it. Just last spring, when Paul Ryan blamed poverty on a “tailspin of culture in our inner cities,” he was sharply rebuked by figures ranging from Democratic Representative Barbara Lee to Times columnist Paul Krugman. Regarding Ebola, MSNBC’s Alex Wagner did chastise what she called the right-wing media’s “thinly veiled, racially charged questions,” but a Google search doesn’t turn up much else on the topic.

So why are so few decrying the racial elements in today’s scare tactics? A recent primer on coded racial terms provides a clue, for the short glossary focused only on blacks, listing these words: thug, inner city, ghetto, uppity, Oreo, shady and sketchy. In short, we’re increasingly sophisticated in our ability to recognize surreptitious references to African-Americans, but not others.

That blacks should be the quintessential reference in racial politics is no surprise. Dog whistling arose in the South as a replacement language for more open endorsements of segregation rendered unacceptable by the civil rights movement, and as it spread to the rest of the country beginning in the 1970s, African-Americans remained the principal boogeyman. Obama’s election has only added to this potency.

But since 9/11, there have been sonorous new barrages in dog whistle politics emphasizing the threat to national security from brown in addition to black. Whether its “Muslim terrorists” or “illegal aliens” — or, most recently of all, “Ebola!” — the drums of racial threat are also pounding out warnings of extremist elements and diseased hordes at the gates.

The coded terms used in dog whistle politics constantly evolve, partly to fit the times, partly to avoid censure. After a decade and more, we’re long past due to recognize that dog whistling has moved beyond African-Americans, and now also targets Latinos, Muslims and — as of a few weeks ago — African immigrants and Ebola.

This is the fifth in a series of posts that Ian Haney López, the author of Dog Whistle Politics: How Coded Racial Appeals Have Reinvented Racism and Wrecked the Middle Class, will be writing in the weeks leading up to the November election.