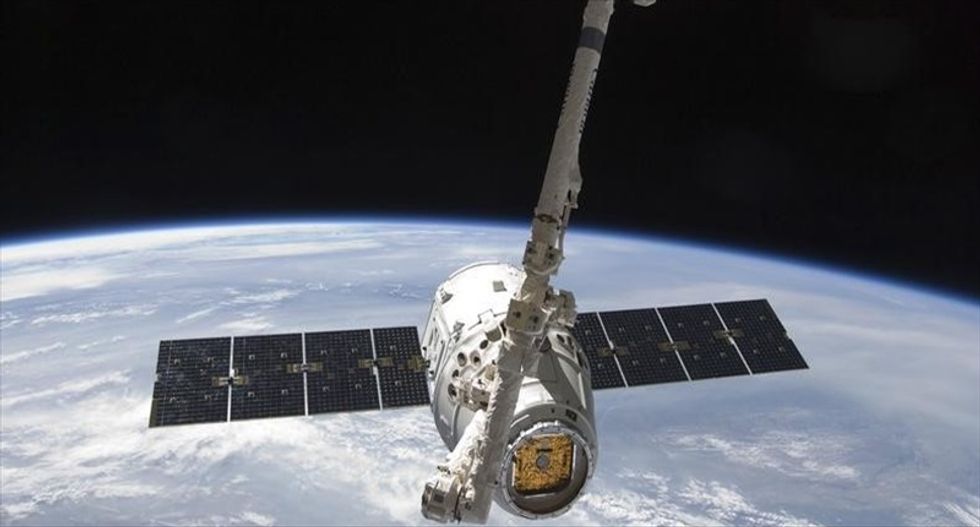 With the Earth in the background, the SpaceX Dragon commercial cargo craft is seen as it is grappled by the International Space Station's Canadarm2 robotic arm in this photo provided by NASA and taken May 25, 2012. REUTERS/NASA/Handout

NASA last month selected Boeing and privately owned Space Exploration Technologies for a fourth and final round of funding to develop, test and fly commercially owned and operated space taxis. NASA is looking to buy rides for astronauts traveling to and from the International Space Station beginning in 2017, breaking Russia’s monopoly on crew transport.

The contracts, which have a combined value of up to $6.8 billion, include six operational missions for each carrier.

The Sept. 16 awards however, sparked a protest by losing contender Sierra Nevada, which asked the Government Accountability Office to review how NASA assessed the proposals and ended up selecting Boeing’s $4.2 billion bid.

Sierra Nevada asked for $3.3 billion, $900 million less than Boeing. SpaceX, as the California-based company is known, offered to do the same work for $2.6 billion. The GAO is expected to issue a ruling by Jan. 5.

NASA instructed Boeing and SpaceX to stop work on the contracts after Sierra Nevada filed its Sept. 26 protest, but the U.S. space agency rescinded the order on Oct 9.

“Under statutory authority available to it, NASA has decided to proceed with the Commercial Crew Transportation Capability contracts,” NASA wrote in a statement posted on its Commercial Crew website.

“The agency recognizes that failure to provide the … transportation service as soon as possible poses risks to the International Space Station (ISS) crew, jeopardizes continued operation of the ISS, would delay meeting critical crew size requirements, and may result in the U.S. failing to perform the commitments it made in its international agreements,” NASA said.

In a lawsuit filed on Wednesday, Sierra Nevada asked the U.S. Court of Federal Claims in Washington, D.C., for a temporary restraining order and a preliminary injunction to overturn NASA’s decision to resume work on the contracts.

“Contrary to the GAO position that there be a stay, NASA unilaterally decided to continue work,” Sierra Nevada vice president Mark Sirangelo said in an interview. The bid protest will remain with the GAO, he added.

If Sierra Nevada should win its protest, the competition may be restarted. A hearing on Sierra Nevada’s injunction request is scheduled for Friday morning.