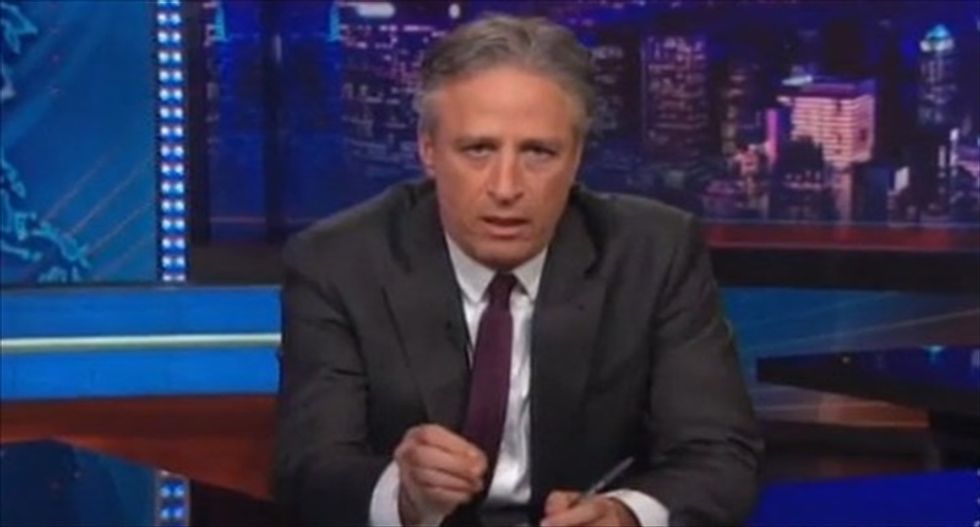 Daily Show host Jon Stewart skewered Sen. Mitch McConnell's (R-KY) "cynical ploy" to run for re-election on Wednesday, mocking him for acting like he wanted to work in a bipartisan fashion.

"That is complete bullsh*t," Stewart said, reminding his audience that it was McConnell who told Republicans they should act "in lockstep" to block Democrats and President Barack Obama from accomplishing anything during his time in office, thus making it look like Obama had failed to accomplish anything.

At the same time, though, Stewart observed that McConnell was stuck trying to demonstrate support for Kynect, his state's health exchange, which was implemented under the Affordable Care Act.

McConnell, Stewart said, "can't admit Kynect works, since it's got Obama stink on it. But he can't shut it down, because it works."

Instead, McConnell said during a recent debate against challenger Alison Lundergan Grimes that he supported the Kynect "website" while still calling for the law behind it -- a/k/a "Obamacare" -- to be repealed.

Overall, Stewart said, this year's midterm elections have been fraught with self-loathing on the part of both Republicans and Democrats.

"This election's underlying theme is that both parties are so unpopular, that their candidates are running on how much they hate themselves," Stewart explained.