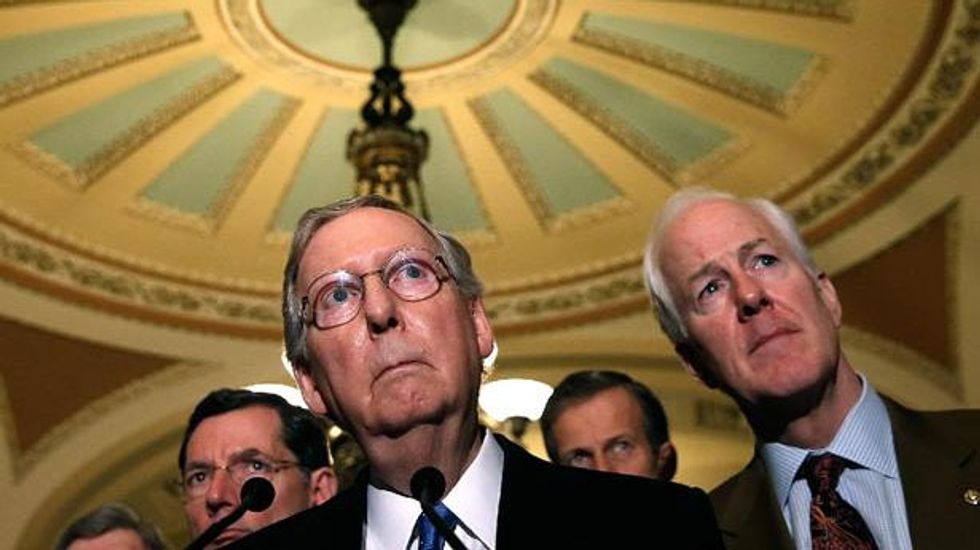 A Kentucky sports radio talk show host criticized Sen. Mitch McConnell (R-KY) on Wednesday after a prickly interview in which McConnell dodged several policy topics while talking up his bonafides as a college basketball fan.

According to the Daily Kos, Kentucky Sports Radio host Matt Jones said McConnell's staff called him to arrange the discussion just 10 minutes before the senator went on the air.

"That was needlessly angry, to start," Jones said after the interview. "To call and give me 10 minutes -- and actually, they wanted to give me no minutes, 'cause they called and wanted to come on immediately."

By comparison, Jones said, he was given time to prepare before an interview last month with Secretary of State Alison Lundergan Grimes, McConnell's Democratic Party challenger for re-election.

The phone interview began with McConnell telling Jones that his listeners "need to know" that he graduated from the University of Kentucky, unlike Grimes. McConnell's campaign was mocked earlier this year after releasing an ad mistakenly featuring players from Duke University. Jones' station reported at the time that a revised version featuring then-Kentucky player Julius Randle had to be pulled because it violated NCAA regulations.

"Who's your favorite player on the team?" Jones asked.

However, McConnell was on the defensive when Jones asked him who he rooted for when Kentucky played its in-state rival, the University of Louisville.

"It is OK -- it's probably not acceptable to you as a [Barack] Obama enthusiast -- but it's okay to be for both Louisville and Kentucky," McConnell snapped, explaining that he completed his undergraduate studies at Louisville and graduated from Kentucky's law school, and comparing the choice to picking between his three daughters.

"What does me being an Obama supporter have to do with Kentucky vs. Louisville?" Jones asked.

"It's just something you and I don't agree on," McConnell said.

Later, Jones pressed McConnell on his stance regarding global warming, asking if he believed in the phenomenon.

"But senator, that's a yes or no question," Jones replied, before repeating his question. "Do you believe in global warming?"

"No it isn't a yes or no question," McConnell said again. "It is not a yes or no question. I am not a scientist. I know there are scientist who think it's a problem, and scientists who think it isn't a problem. And I know that George Will wrote recently that back in the '70s we thought we were heading into the ice age. So there are differences of opinion among scientists. My job is to try to protect jobs in Kentucky -- now. Not speculate about science in the future."

WPFL-FM pointed out that Grimes gave a more decisive answer, telling Jones that she believed in climate change and called for the state to "diversify" its economy while maintaining the coal industry.

Jones and McConnell also sparred when the senator refused to say anything on marriage equality besides stating that his opinion was "that marriage should be between one man and one woman."

"But you base that on what?" Jones asked.

"The courts are dealing with this issue and you're citing things that are the result of court decisions," McConnell said. "I'm giving you my opinion, and my opinion is marriage should be between one man or one woman."

"I understand that, and I'm not saying you're wrong," Jones replied. "I just want to know, where does that come from? Is that your Biblical belief?"

"It is my belief that marriage is between one man and one woman," McConnell said again.

After the interview, Jones said McConnell's staffers "played it the right way" by refusing to give him time to prepare, but that he refused to believe McConnell's stated non-partisanship regarding the college basketball rivalry.

"I don't know if the smartest move is to come out as combative as that," Jones said. "He was pretty combative."

Talking Points Memo reported that, according to Polltracker, Lundergan Grimes holds a narrow lead over McConnell.

The interview can be heard in full below.

Jones' comments after the interview were also posted online, and can be heard here.