Minn. rep. confronts GOP opponent: 'I don't need an assault rifle to shoot a duck. Maybe you do.' 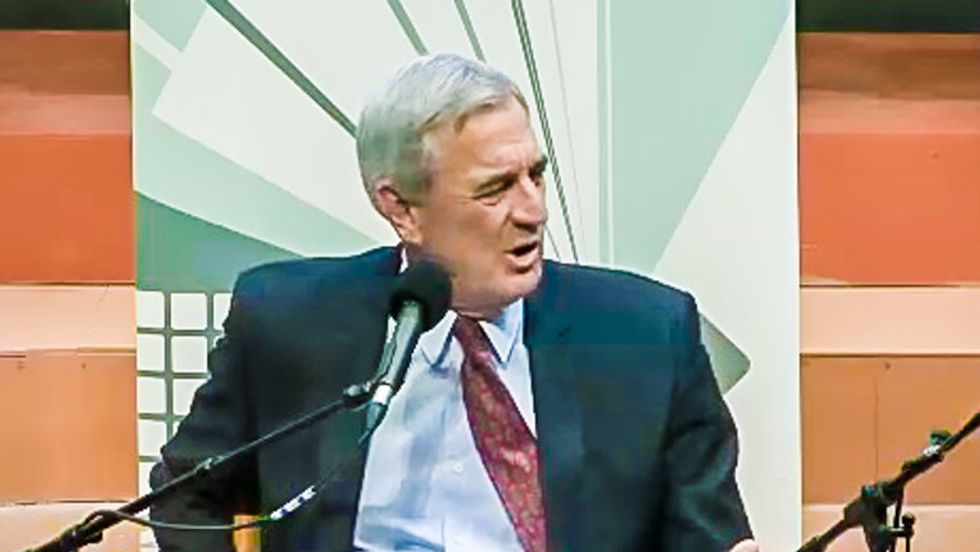 Minnesota Rep. Rick Nolan (D) on Wednesday defended his call for gun safety laws by joking that his Republican opponent might need a military-style assault rifle to shoot ducks, but he didn't.

Nolan's opponent, Stewart Mills, and the Minnesota Republican Party have pointed to the statement as evidence that the congressman wanted to limit gun rights.

"Stewart, what I said on CBS Face the Nation was that I don't need an assault rifle to shoot a duck," he explained at a debate for Minnesota's 8th District on Tuesday. "And I don't. Perhaps you do. Maybe you should spend more time at your shooting range."

"The fact is, right now, you can only have three shells in your gun when you're shooting ducks," Nolan continued. "The fact is, there have been numerous safety measures that have been passed over the years that have not in any way abridged the right -- our right -- to bear arms. That's just the hard cold fact of life."

"Kids can't go to school with a machine gun and a grenade launcher. That was outlawed a long time ago, but that doesn't take away our right to bear arms."

Nolan added that he wasn't worried about his "F" rating from the NRA because the organization was "primarily Washington lobbyists in thousand dollar suits lobbying for gun manufacturers, and the people who sell guns."

Mills replied that Nolan was "way over the line" to accuse him of wanting to sell guns to criminals and terrorists.

"We have the [FBI] NICS background check right now, and we should follow the laws we have instead of trying to create new ones," the Republican nominee insisted. "All semi-automatic rifles work exactly the same way regardless of how they look. And also, I don't want the government to tell me I can only have three bullets in my gun."