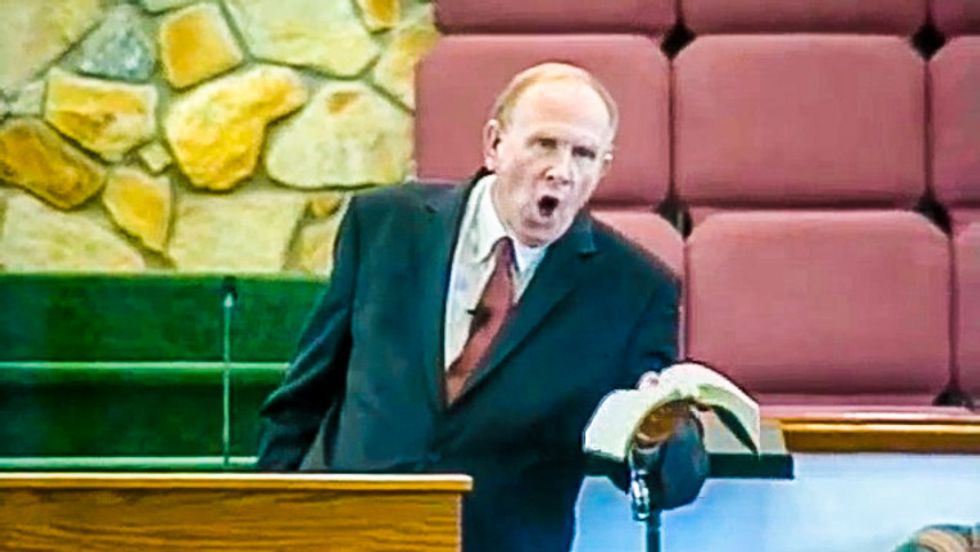 A Baptist pastor is warning that God will escalate the Ebola crisis when North Carolina begins performing same-sex marriages.

During his Sunday sermon following a series of court actions that effectively struck down North Carolina's constitutional ban on marriage equality, Berean Baptist Church Pastor Pastor Ron Baity suggested that homosexuality was a sign of the End Times.

"So the book of the Revelation is about End Times events and what happens when this world is destroyed by fire, when the stars and the universe and the sun and the moon, like untimely figs cast from a tree, are just completely done away with and annihilated," he said, telling his congregation to focus on what the Bible said would happen before that.

Baity said that even after God flooded the Earth to stop homosexuality, people were "out of their habitation" in the cities of Sodom and Gomorrah.

"They were doing something that was not normal, they were doing something that was not natural, and as a result of that, like God judged this world with a flood, he judged Sodom and Gomorrah with fire!" the pastor exclaimed. "The most blasphemous thing I've heard in 40 years of ministry, I heard on the news last night, where rogue judges have gone against the will of the ministry and made America a country where there's totalitarianism, where there are judges who have set themselves up as dictators to overthrow the will of the people! And they placed their sanction upon marriage that is out of the habitation of God's creation!"

Baity said that he also saw an official "place his blessing upon two men" by pronouncing them "husband and husband."

Baity noted that the official had taken it "one step farther" when he "blasphemed the God of heaven" by blessing the wedding.

"If you think for one skinny minute, God is going to stand idly by and allow this to go forward without repercussions, you better back up and rethink this situation," he warned. "I want you to understand, that is raw, pure blasphemy."

The Baptist minister concluded by comparing LGBT people to cows, and saying that they only had could continue the farm because "we had to turn loose in the pasture a bull."

"There was never a cow going around slobbering on another cow, sending a signal that I'm in love with this cow," he said. "And when the bull got in the pasture, we didn't have to give them a course in bullology or cowology. They had an inborn nature, they knew exactly and precisely what they needed to do to make sure that the Baity family had cows 20 years from now."

"I would hate to think that two skunks in the backyard was smart than a judge that supposed to have studied the laws of the land," Baity remarked. "Listen, we're not getting wiser, we're getting dumber! We're not getting smarter. My friend, we are meriting, we are bringing the judgement of God on this nation as sure as Sodom and Gomorrah was destroyed, don't be surprised at the plagues. Don't be surprised at the judgement of God."

"You think Ebola is bad now, just wait. If it's not that, it's going to be something else. My friends, I want you to understand, you can't thumb your nose at God, and God turn his head away without God getting your attention."

In 2012, the year that North Carolina voted for a constitutional ban on same-sex marriage, Baity preached that LGBT people were like "maggots" and murderers, who were promoting "perversion" in schools. That same year, Tony Perkins personally awarded Baity the Family Research Council's top "pro-family" award.

“This award is given to a pastor who has demonstrated outstanding servant leadership for the heart and soul of America, but more importantly for the advancement of God’s Kingdom," Perkins said at the time. "It’s fitting we honor those who are faithfully working to engage our culture for Jesus Christ.”

Listen to the audio below from the Berean Baptist Church.