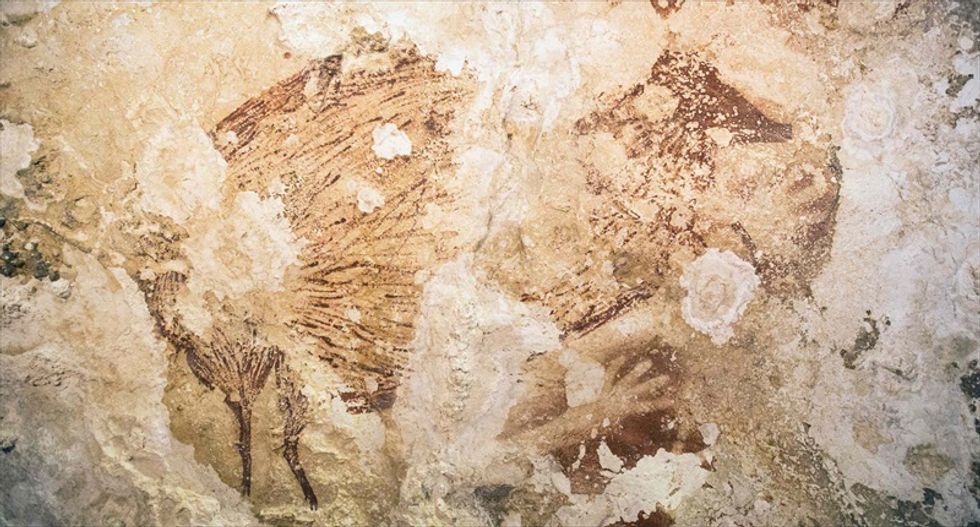 A Babirusa ("pig-deer") and a hand stencil are pictured in this undated handout image provided by Kinez Riza. REUTERS/Kinez Riza/Handout via Reuters.

Prehistoric paintings at least 40,000 years old that depict animals -- including one known as a "pig-deer" -- and the outline of human hands in seven caves on the Indonesian island of Sulawesi are rewriting the history of art.

Scientists said on Wednesday they used a highly precise method to determine the antiquity of the paintings. They found the artwork was comparable in age to the oldest-known rock art from Europe, long thought to be the cradle of the early human cultural achievement embodied by cave painting.

"It was previously thought that Western Europe was the centerpiece of a symbolic explosion in early human artistic activity such as cave painting and other forms of image-making, including figurative art, around 40,000 years ago," said dating expert Maxime Aubert of Australia's Griffith University.

The fact that people in Sulawesi were doing the same things as contemporaries in Europe indicates cave art may have emerged independently at about the same time around the world, including Europe and Southeast Asia, added archeologist Thomas Sutikna of Australia's University of Wollongong.

"Rock art is one of the indicators of an abstract mind of the past human, the onset of what we might consider to be one of the hallmarks of 'modern' humans," Sutikna added.

The study focused on 14 cave paintings: 12 human hand stencils and two naturalistic animal depictions, one showing an animal called a babirusa, or "pig-deer," and the other showing what probably is a pig.

They were painted in limestone caves near Maros in southern Sulawesi, a large island east of Borneo.

Most of the artwork was created with a pigment called red ochre to produce red- and mulberry-colored paintings. The art's existence had been known for decades, but its age had never been determined. Some experts estimated it was maybe 10,000 years old.

The scientists used a method based on the radioactive decay of tiny quantities of uranium in small mineral growths dubbed "cave popcorn" that formed on some of the paintings.

The oldest Sulawesian artwork, a hand outline at least about 40,000 years ago, was comparable in age to the world's oldest-known rock art image, a red dot from Spain's El Castillo site.

The ages for the animal paintings at the famed Chauvet and Lascaux cave sites in France are more recent - between about 26,000 and 18,000 years old - than Sulawesi's figurative animals, which are at least 35,000 years old. The babirusa image represents the oldest-known, reliably dated figurative depiction, Aubert said.

The artists made hand images by blowing or spraying paint around hands pressed against rock surfaces.

"Archaeologists love to say things like 'ability X is what makes us human,' but in the case of the origins of art they are probably right. Our species is compelled to make art. And in one form or another, it is inherent in almost everything we do," said archaeologist Adam Brumm, also of Griffith University.

The study appears in the journal Nature.

(Reporting by Will Dunham. Editing by Andre Grenon)