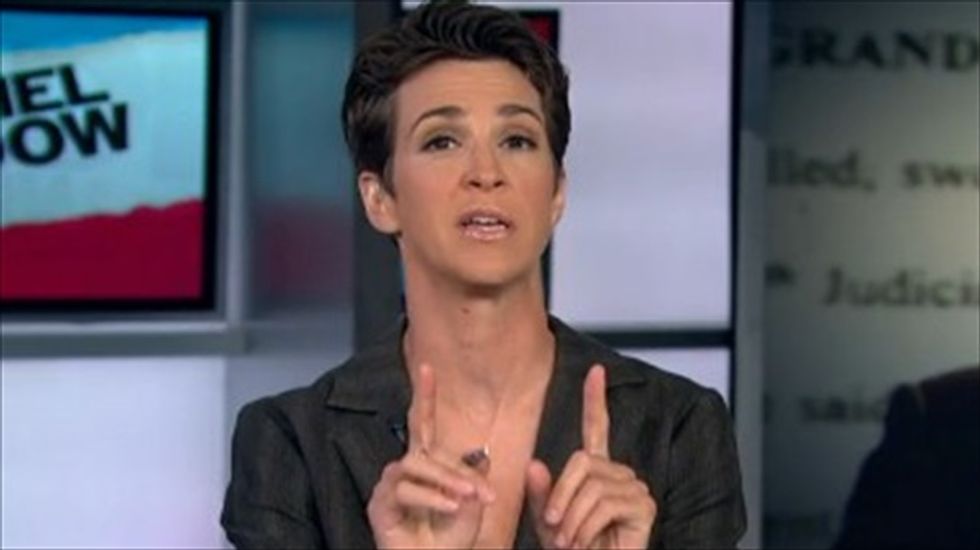 On Thursday night, MSNBC's Rachel Maddow welcomed immunologist Dr. Anthony Fauci to her show to discuss the multiple instances in which doctors and health officials in the state of Texas mishandled the nation's first Ebola case.

"Obviously, this is very much in its early days," Maddow said, "We do not yet know how Texas is going to handle this as a whole, but Texas' early missteps, including ones we are still learning about today, are unsettling."

The patient -- a man named Thomas Duncan -- showed up at Texas Health Presbyterian Hospital last Thursday night with early signs of Ebola infection. The hospital, Maddow pointed out, had just gone through an Ebola preparedness drill.

Duncan explained that he had just traveled to Liberia, one of three West African nations hit hardest by the Ebola outbreak. Nonetheless, the hospital sent him back home with antibiotics.

The infected man got sicker and sicker in the apartment he shares with his family, until finally on Sunday his relatives called an ambulance and he was taken back to Presbyterian Hospital.

As of Thursday night, Maddow noted, all of the sick man's soiled clothing, bedding and towels remain in the residence. The family -- including children -- are all still living in the apartment, although health officials have asked them to remain isolated.

"Ebola does not spread through the air," she said. "The only way to contract it is from somebody else who is symptomatic and for you to come into contact with their bodily fluids."

"If somebody who is very sick with the disease has had their body fluids on sheets and towels and bedding, then those materials do need to be handled with extreme care," she continued.

Because of the virus' long incubation period -- anywhere from two to 21 days -- it is impossible now for the hospital to simply test everyone who was in the Emergency Room last Thursday or who might have come into contact with the Ebola patient. The virus may not yet be abundant enough in their blood to cause symptoms or to be detected by clinical test.

"Seriously, is this transparency?" one reporter asked. "If you get us all here and then walk away after a half-dozen questions?"

Dr. Antony Fauci -- director of the National Institute of Allergy and Infectious Diseases (NIAID) -- reiterated that people who aren't showing symptoms can't transmit Ebola, so everyone who Duncan encountered on his trip back to the U.S. is safe.

There are about 20 people, Fauci said, who Texas health officials should be following, once all contacts are thoroughly vetted. That task is made infinitely harder by the way Texas has handled the situation so far.

"The only positive thing I can take out of those missteps," Fauci said, "is that this will now be a really hard lesson learned. So that people seeing this unfold in the United States and in other countries that might have an imported patient with Ebola to realize the important things to do."

Watch video about this story, embedded below via MSNBC: