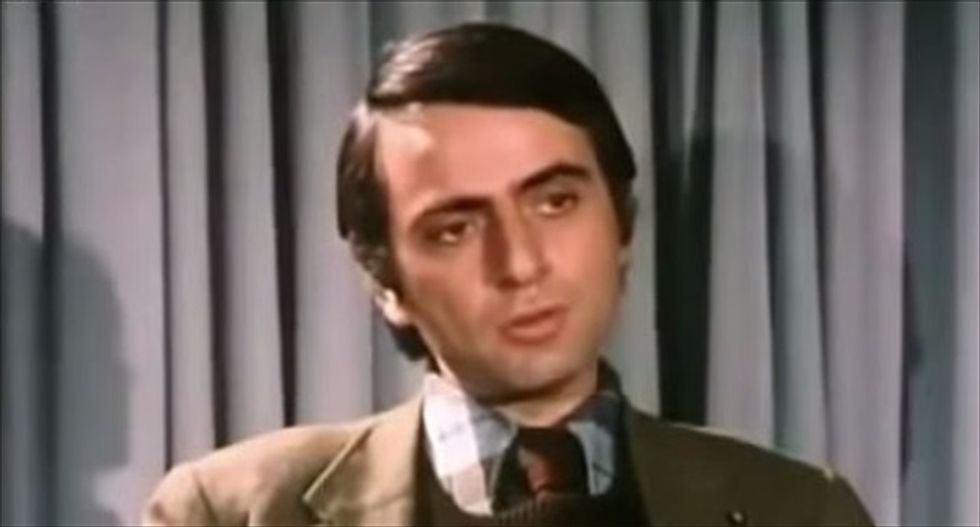 Astrophysicist and original Cosmos host Carl Sagan was a quiet advocate for marijuana legalization and left behind boxes full of correspondence criticizing the "war on drugs," Marijuana.com reported.

In an April 1990 letter to Drug Policy Foundation head Arnold Trebach, for instance, Sagan complained about an ad campaign by the Partnership for a Drug-Free America.

"Doesn't it seem to you that these commercials routinely make gross distortions of the scientific facts and uncertainties in our knowledge?" Sagan wrote. "Shouldn't there be a systematic attempt to rebut?"

Sagan was likely prevented from issuing his own rebuttal by NASA instituting a rule requiring contractors like himself to sign an oath saying he would not use marijuana.

"The oath required smacks of prior restraint and is unsymmetrical with respect to other crimes," he wrote to Massachusetts Health Center chief Lester Grinspoon in June 1988. "We are not obliged to sign an oath that we will not murder our fellow employees, for example."

In another letter to Trebach, Sagan argued in favor of "a balanced look at a broad array of drug issues on American television," adding several questions he wanted to see addressed.

"How much money is spent every year on the planet on illegal drugs?" he asked. "Does the existence of such enormous amounts of money inevitably lead to corruption in police and military enforcement agencies, legislators, intelligence agencies and the Executive branch? If the financial rewards from drug dealing are so enormous, will not the suppression of the drug industry in one nation cause it to proliferate in another nation?"

The letters were released as part of a Library of Congress exhibition funded by Seth McFarlane, who produced the Cosmos revival, and Sagan's widow and frequent collaborator, Ann Druyan.

"We smoked the way other American families would have wine with dinner," Druyan told Marijuana.com "For us, it was our sacrament. It was something that made a great life sweeter in every possible way."

Druyan added that Sagan used marijuana to treat his lack of appetite and nausea in the months leading up to his death in 1996 from pneumonia.

Grinspoon told Marijuana.com that had he survived, Sagan would likely be more open about his pro-marijuana stance, arguing that the letters point to more scientific support for legalizing it.

"We are going at warp speed toward getting rid of that prohibition now," Grinspoon said.