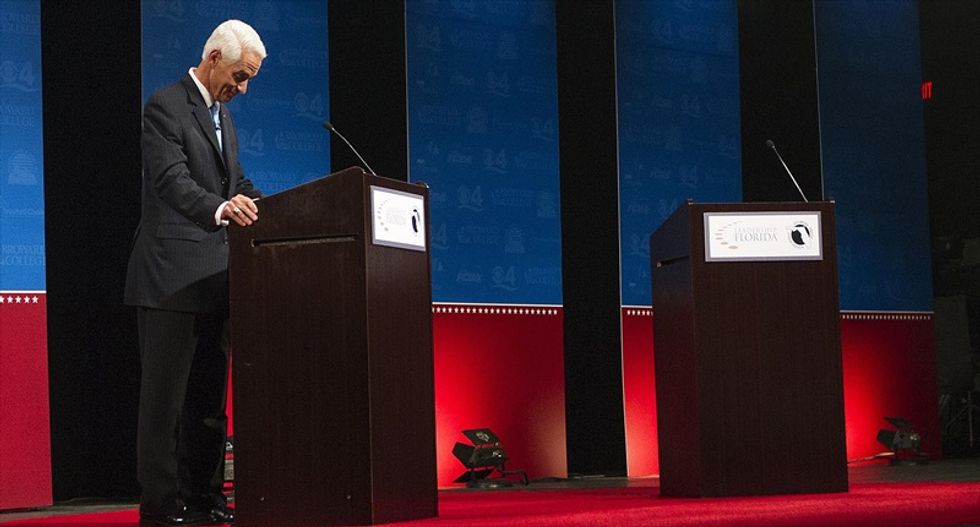 Former Florida Governor and challenger, Charlie Crist, appears alone for the first few minutes of a scheduled one hour debate, as Florida Governor Rick Scott delays taking the stage, during their gubernatorial debate in Davie, on Oct. 15, 2014. Photo by Andrew Innerarity for Reuters.

Florida's Republican Governor Rick Scott and his Democratic challenger Charlie Crist don't agree on much, not even a podium cooling fan that delayed the start of the second televised debates between the two candidates on Wednesday evening.

For all their policy differences in the battle for the nation's largest swing state, the squabble over a small ground-level fan at Crist's legs will likely be the most remembered moment of an otherwise forgettable debate.

Both candidates seemed more concerned about scoring points against their rival than answering a dozen question from a panel of veteran Florida journalists at Broward College in south Florida.

The debate was produced by a local CBS-TV affiliate and the second of three scheduled between the two candidates, and followed by a Spanish-language debate last week on the TV network Telemundo.

It got off to a bizarre start as only Crist took the stage with the broadcast already live. The moderator announced Scott would not come out due to a disagreement over the fan at Crist's feet.

Scott's campaign said the debate rules allowed for "no electronics on the podium," according to one panelist, presumably a reference to equipment that might be used as cheat sheets or prompts for the candidates.

Crist was asked by Rosemary Goudreau from the Sun Sentinel if he was in violation of the agreement.

"Are we really going to debate about a fan or are we going to talk about education, and the economy and the future of our state. I mean really!" Crist replied.

That prompted cries of "Follow the rules," by some Republicans in the audience.

When Scott finally appeared, moderator Eliott Rodriguez remarked to the audience; "Ladies and gentlemen, that has to be the most unique beginning to any debate, not only in Florida, but I think anywhere in the country."

After the debate, Scott's campaign manager Melissa Sellers issued a statement saying, "Crist can bring his fan, microwave, and toaster to debates - none of that will cover up how sad his record as governor was compared to the success of Rick Scott."

The Crist campaign issued its own fund-raising email after the debate, which stated: "If you're as amazed as I am by what you just saw, chip in a few bucks right now to make sure this guy doesn't get to stay our Governor."

Once the debate got underway a few minutes late both candidates wasted no time attacking each other, despite warnings from the panel that the public was upset with the negativity of the campaign so far.

The two candidates stand on opposite sides of a number of key issues, including education funding, same-sex marriage, medical marijuana, Cuba policy and raising the minimum wage.

Polls show the two candidates neck and neck in the race in a state that Scott won by only 60,000 votes in 2010.

Watch video of the delayed start to the debate, as posted by Think Progress on Thursday, below.