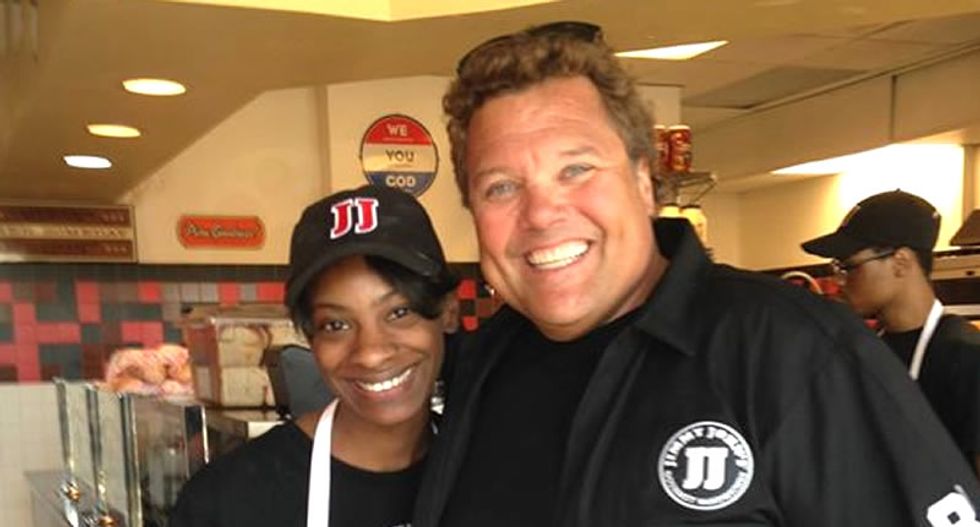 A lawsuit against Jimmy John's revealed that the sandwich shop forces all employees -- including low-wage sandwich makers and delivery drivers -- to sign an employment agreement with a non-competition clause that bars them from working for any competitor for two years after they leave, the Huffington Post reports.

Such non-competition clauses are common among managers and other employees whose knowledge of a company's business practices could be used by a competitor -- but Jimmy John's forces all employees to sign it.

According to the agreement, employees must agree "that, during his or her employment with the Employer and for a period of two (2) years after...he or she will not have any direct or indirect interest in or perform services for...any business which derives more than ten percent (10%) of its revenue from selling submarine, hero-type, deli-style, pita and/or wrapped or rolled sandwiches and which is located with three (3) miles of...any such other Jimmy John's Sandwich Shop."

In an email to the Huffington Post, Kathleen Chavez -- a lawyer representing three former Jimmy John's employees -- wrote that a high school student in Illinois who worked for Jimmy John's would be prevented from working anywhere that served sandwiches in Tuscaloosa, Alabama, because all such shops would fall within three miles of the University of Alabama campus.

"It is disturbing this document is being used and it is our position that it has broad impact on thousands of employees," she wrote.

The company is embroiled in numerous legal battles with its employees, some of whom are attempting to unionize, while others are fighting what the National Labor Relations Board recently deemed unfair labor practices.

The owner of Jimmy John's, James Liautaud, is an avid big game hunter who has come under fire not only for posing with his kills, but also for providing legally suspect funds to Arizona Sheriff Joe Arpaio's "Sheriff's Command Association."