Rising income inequality makes us want to bomb the crap out of everyone: study 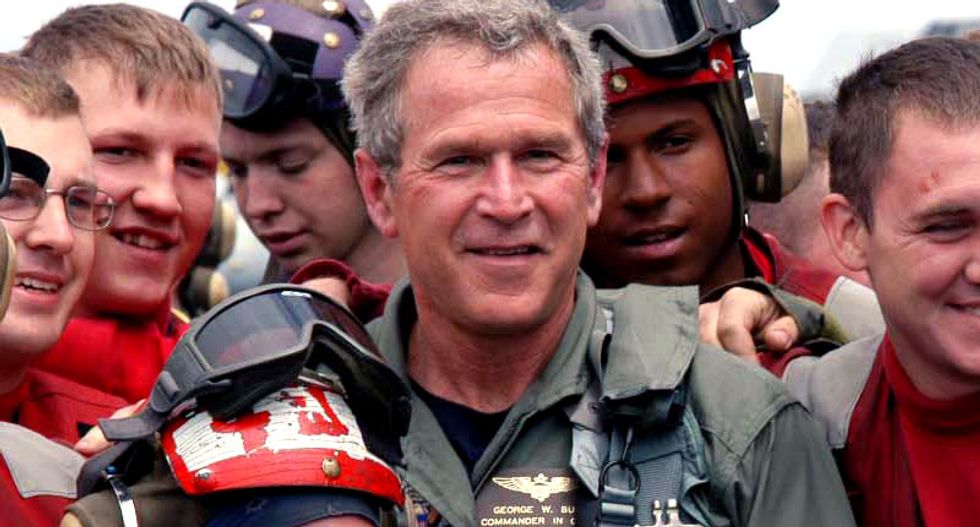 War has long been seen as an endeavor urged on by the elites who stood the most to gain from conflict – whether to protect overseas assets, create more favorable conditions for international trade or by selling materiel for the conflict – and paid for with the blood of the poor, the cannon fodder who serve their country but have little direct stake in the outcome.

That was certainly the perception of the Vietnam War when Creedence Clearwater Revival hit the charts with “Fortunate Son” in 1969. Millions of poor kids were drafted and sent overseas to fight and die in the jungle while children of the affluent got deferments to attend college. (Dick Cheney famously said of the five deferments he received during that time, “I had other priorities in the 60′s than military service.”)

Much has changed since then in terms of how and when wealthy democracies like the US make war. MIT political scientist Jonathan Caverley, author of Democratic Militarism Voting, Wealth, and War, and himself a US Navy veteran, argues that increasingly high-tech militaries, with all-volunteer armies that sustain fewer casualties in smaller conflicts, combine with rising economic inequality to create perverse incentives that turn the conventional view of war on its head. His research looks at public opinion and military aggressiveness, and concludes that it’s the working class and poor who are more likely to favor military action today. And that bottom-up pressure makes wealthy democracies more aggressive.

BillMoyers.com spoke with Caverley about his research. The transcript below has been edited for length and clarity.

Joshua Holland: Your research leads to a somewhat counterintuitive conclusion. Can you give me your thesis in a nutshell?

Jonathan Caverley: My argument is that in a heavily industrialized democracy like the United States, we have developed a very capital intensive form of warfare. We no longer send millions of combat troops overseas – or see massive numbers of casualties coming home. Once you start going to war with lots of airplanes, satellites, communications – and a few very highly trained special operations forces — going to war becomes a check writing exercise rather than a social mobilization. And once you turn war into a check writing exercise, the incentives for and against going to war change.

You can think of it as a redistribution exercise, where people who have less income generally pay a smaller share of the cost of war. This is especially important at the federal level. In the United States, the federal government tends to be funded largely from the top 20 percent. Most of the federal government, I’d say 60 percent, maybe even 65 percent, is financed by the wealthy.

For most people, war now costs very little in terms of both blood and treasure. And it has a redistributive effect.

So my methodology is pretty simple. If you think that your contribution to conflict will be minimal, and see potential benefits, then you should see an increased demand for defense spending and increased hawkishness in your foreign policy views, based on your income. And my study of Israeli public opinion found that the less wealthy a person was, the more aggressive they were in using the military.

Holland: You looked specifically at public opinion in Israel, which is the most militarized state in the world, as far as per capita military spending. Why did you choose to study Israel?

Caverley: Well, Israel’s a really interesting case because I study democracies and war, and Israel is a democracy that’s almost always fighting a war, or at least preparing for one. And in some ways, it’s the toughest case for my thesis because they have mandatory military service, and who serves can often be an important cost mechanism to prevent people from engaging in war.

But Israel’s going through a very interesting phase of its history right now. It’s becoming very high tech. Economic inequality’s skyrocketing. The IDF is becoming very professionalized. And in some ways, the threat is changing — they’re much less worried about large, tank-based invasions along their borders than they are about terrorism and the threat of missile strikes. So all of these shifts coming together means that I should probably see the effect in Israel if I see it anywhere. And sure enough, I do.

Holland: The bumper sticker finding here is that your model predicts that as inequality increases, average citizens will be more supportive of military adventurism, and ultimately in democracies, this may lead to more aggressive foreign policies. How does this jibe with what’s known as “democratic peace theory” — the idea that democracies have a lower tolerance for conflict and are less likely to go to war than more authoritarian systems?

Caverley: Well, it depends on what you think is driving democratic peace. If you think it’s a cost-avoidance mechanism, then this doesn’t bode well for the democratic peace. I’d say most people I talk to in my business, we’re pretty sure democracies like to fight lots of wars. They just tend not to fight with each other. And probably the better explanations for that are more normative. The public is just not willing to support a war against another public, so to speak.

To put it more simply, when a democracy has the choice between diplomacy and violence to solve its foreign policy problems, if the cost of one of these goes down, it’s going to put more of that thing in its portfolio.

Holland: Let me ask you about a rival explanation for why poor people might be more supportive of military action. In the paper, you mention the idea that less wealthy citizens may be more prone to buy into what you call the “myths of empire.” Can you unpack that?

Caverley: In order for us to go to war, we have to demonize the other side. It’s not a trivial thing for one group of people to advocate killing another group of people, no matter how callous you think humanity might be. So there is typically a lot of threat inflation and threat construction, and that just goes with the territory of war.

So in my business, some people think that the problem is that elites get together and, for selfish reasons, they want to go to war. That’s true whether it’s to preserve their banana plantations in Central America or sell weapons or what have you.

And they create these myths of empire — these inflated threats, these paper tigers, whatever you want to call it — and try to mobilize the rest of the country to fight a conflict that may not necessarily be in their interest.

If they were right, then you would actually see that people’s foreign policy views – their idea of how great a threat is — would correlate with income. But once you control for education, I didn’t find that these views differed according to what your wealth or income is.

Holland: In the study you point out that most social scientists don’t see military spending as having a redistributive effect. I didn’t understand that. What some call “military Keynesianism” is a concept that’s been around for a long time. We located a ton of military investments in the Southern states, not only for defense purposes, but also as a means of regional economic development. Why don’t people see this as a massive redistribution program?

Caverley: Well, I agree with that construction. If you watch any congressional campaign or you look at any representative’s communication with his or her constituents, you will see that they talk about getting their fair share of defense spending.

But the larger point is that even if you don’t think about defense spending as a redistributive process, it is a classic example of the kind of public goods that a state provides. Everyone benefits from defense of the state – it’s not just rich people. And so national defense is probably one of the places you’re most likely to see redistributive politics, because if you’re not paying too much for it, you’re going to ask for more of it.

Holland: Increasing inequality and poverty is the context here. People are vaguely aware, or should be—that this spending can confer a material benefit on them. And that is reflected in the public opinion polling you looked at. But those polls didn’t ask, “Would you prefer to spend that money on butter rather than guns?”

Holland: I guess that kind of comports with the very long history of polling on spending priorities, where people always say, “Yes, we want tax cuts, but we don’t want you to touch Social Security or education or any of these other things.”

Caverley: Yes, and we’ve known about this problem for decades, but it’s just very hard, in terms of public opinion, to get people to choose one priority over another. We’ve been trying to do it for a long time now.