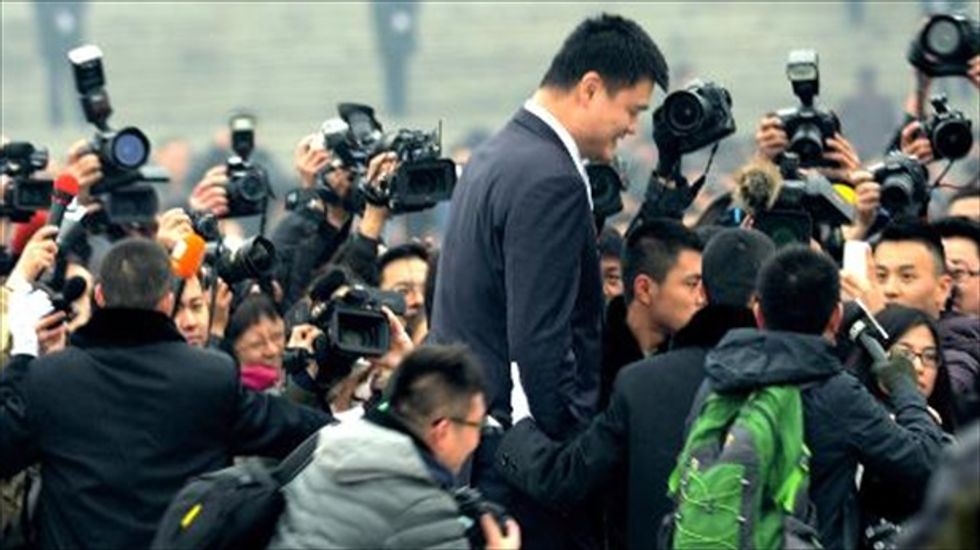 Former NBA star Yao Ming gets mobbed by the media as he arrives for the opening session of the Chinese People's Political Consultative Conference in Beijing on March 3, 2014 [AFP]

It's no secret that if your dad is tall and your mother is tall, you are probably going to be tall. But fully understanding the genetics of height has been a big order for scientists.

Researchers on Sunday unveiled what they called the biggest such study to date, analyzing genome data from more than a quarter million people to identify nearly 700 genetic variants and more than 400 genome regions relating to height.

How tall or short a person becomes is estimated to be 80 percent genetic, with nutrition and other environmental factors accounting for the rest. The world's people on average have become taller over the past few generations because of factors such as improved nutrition.

"We study height for two main reasons," said Dr. Joel Hirschhorn, a geneticist and pediatric endocrinologist at Boston Children's Hospital and the Broad Institute of Massachusetts Institute of Technology and Harvard University.

In addition, short stature in childhood is a major clinical issue for pediatric endocrinologists. Knowing genes and their variants that are important for height eventually may help doctors diagnose children who have a single major underlying cause for short stature, Hirschhorn added.

The international team of researchers analyzed data from the genomes of 253,288 people of European ancestry, all from Europe, North America and Australia. They perused about 2 million common genetic variants in these individuals and identified 697 gene variants in 424 gene regions as related to height.

Many genes pinpointed in the study, published in the journal Nature Genetics, are probably important regulators of skeletal growth, but were not previously known to be involved, the researchers said.

Some were related to collagen, a component of bone; a component of cartilage called chondroitin sulfate; and growth plates, the area of growing tissue near the ends of the body's long bones.

The researchers said there is much more to learn.

"We've found the genetic variants -- the pieces of DNA that vary from person to person -- that account for 20 percent of the genetic component to normal variation in height," said geneticist Timothy Frayling of Britain's University of Exeter.

"This compares to a situation in 2007 when we knew absolutely nothing about the genes and regions of the human genome involved in normal height differences despite everyone knowing height is very strongly genetic."

"By doubling the sample size, we doubled the number of gene regions that are connected to height, and greatly increased by about seven-fold the number of actual genes where we can make a connection to the biology of normal skeletal growth," Hirschhorn said.

(Reporting by Will Dunham; editing by Susan Thomas)