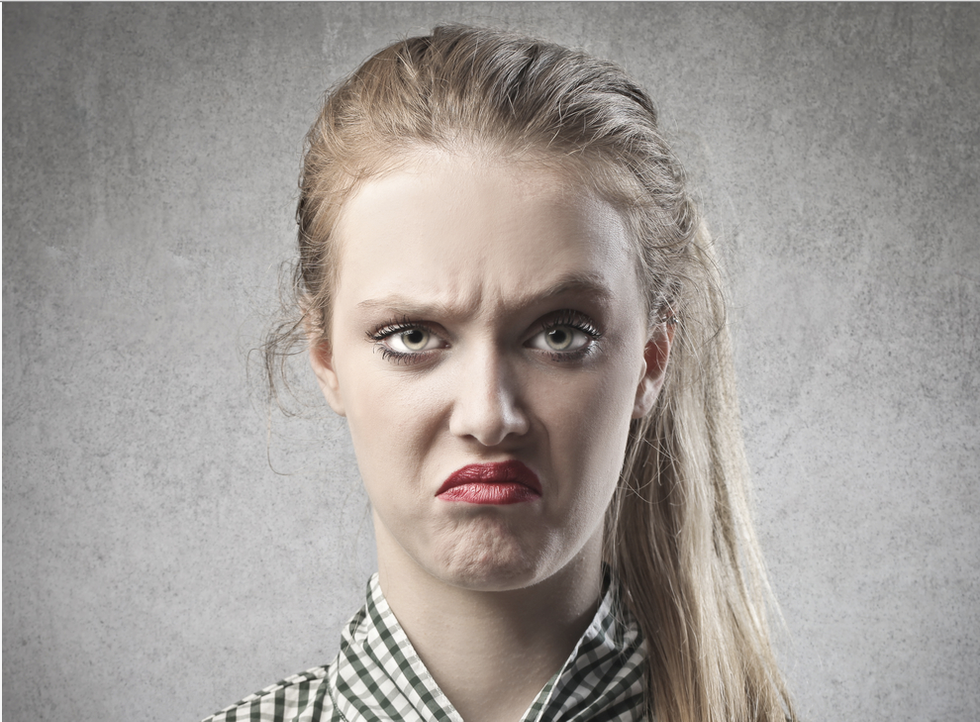 Woman disgusted by something (Shutterstock.com)

Scientists say they can predict "with 95 percent accuracy where you’ll fall on the liberal-conservative spectrum by showing you just one picture" and then studying how your brain responds to the image. Furthermore, studies show that political orientation may be as inheritance-based as height.

According to New Scientist, increasing evidence indicates that the sense of disgust is closely aligned with a person's political orientation. People who land on the conservative end of the spectrum have a more easily aroused sense of disgust than their liberal counterparts.

A team of scientists at Virginia Tech led by researcher Read Montague found that people who are more likely to sit on the right side of the political spectrum have a higher sensitivity to disgusting pictures like bodily waste, gore or the remains of dead animals.

These individuals also showed a greater preoccupation with ideas of bodily and spiritual purity and as a result tended to oppose things they view as unclean like same-sex marriage and abortion.

In their study -- published Thursday in the Cell Press journal Current Biology -- Montague's team took a group of 83 volunteers and performed fMRI brain imaging scans on them as the test subjects viewed a series of images. Some were disgusting, others threatening. Some were neutral and others pleasant.

After the images of their brain activity were recorded, the volunteers answered a questionnaire about a series of social and political issues, asking them to rate themselves on a continuum from "very liberal" to "very conservative."

In a press release about the study, Montague said, "A single disgusting image was sufficient to predict each subject's political orientation. I haven't seen such clean predictive results in any other functional imaging experiments in our lab or others."

When confronted with disgusting images, the people who classified themselves as conservatives showed increased brain activity in brain regions associated with disgust -- the basal ganglia and amygdala -- as well as in a complex network of regions involved in emotional self-control, information processing and attention. Liberals showed increased activity in their own brains, but in a diverse array of areas.

"In fact," Montague told New Scientist, "the responses in the brain are so strong that we can predict with 95 per cent accuracy where you'll fall on the liberal-conservative spectrum by showing you just one picture. This was surprising as there are no other reports where people's response to just one stimulus predicts anything behaviorally interesting."

The team's findings also indicate that since the structure and function of these areas of the brain are almost entirely determined by genetics, political leanings may be something we mostly inherit from our parents, just as much as height and hair color.

"We pursued this research because previous work in a twin registry showed that political ideology -- literally the degree to which someone is liberal or conservative -- was highly heritable, almost as heritable as height," Montague said in a statement from Virginia Tech's Carillon Research Institute.

However, that doesn't mean a person's political outlook is determined at birth, he cautioned.

"Genetics predetermines height -- but not fully," he said. "Nutrition, sleep, and starvation can all change someone's ultimate height. But tall people's children tend to be tall, and that's a kind of starting point. If we can begin to understand that some automatic reactions to political issues may be simply that -- reactions -- then we might take the temperature down a bit in the current boiler of political discourse."

With regards to the approach of the 2014 midterm elections next week, Montague said it's incumbent upon voters to "Think, don't just react," he said. "But no one needs neuroscience to know that's a good idea."