This September was the warmest on record, NASA data shows 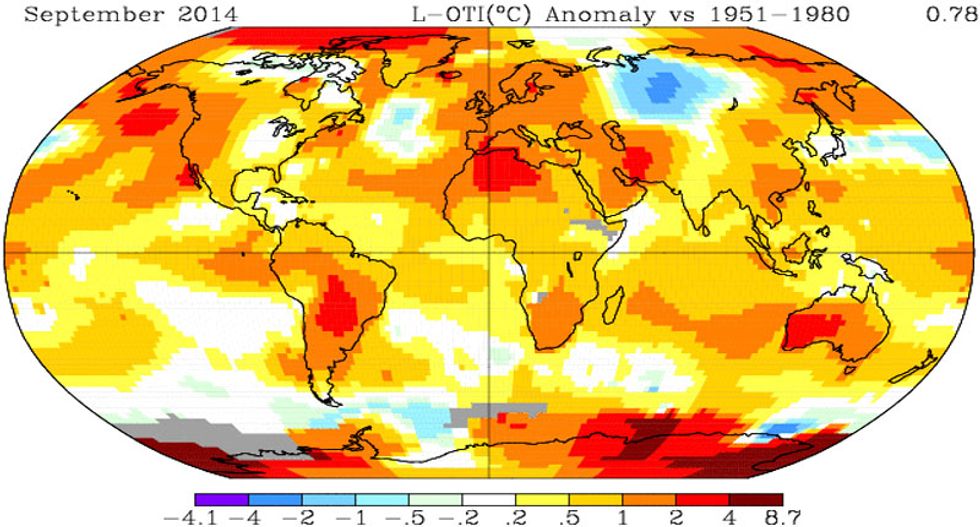 Like August before it, September 2014 was the warmest September on record, according to newly updated NASA data. The warm month makes it even more likely that 2014 will become the warmest year on record.

This September was about 1.4°F above the 1951-1980 average temperature for the month, data from NASA’s Goddard Institute for Space Studies (GISS) showed. That makes it the warmest September in GISS records, edging out the previous September record set in 2005. GISS records extend back to 1880.

September followed what both NASA and the National Climatic Data Center (NCDC) rated as th ewarmest August on record, and what NASA ranked as the fourth warmest summer on record globally. NCDC’s temperature data for September will be released later this week.

When August’s record-breaking warmth was announced, Jake Crouch, an NCDC climatologist, said, “if we continue a consistent departure from average for the rest of 2014, we will edge out 2010 as the warmest year on record.” For that to happen, each of the remaining months of the year would only have to rank among the top five warmest, he added.

With the NASA data suggesting September easily met that mark, it becomes more likely that 2014 will take the top slot.

Ocean temperatures have played a large role in 2014’s warmth, including the warmer-than-normal sea surface temperatures in the tropical Pacific Ocean that have accompanied an emerging El Niño, Kevin Trenberth, a climatologist with the National Center for Atmospheric Research, told Climate Central in an email.

The ocean is where some 90 percent of the excess heat trapped by greenhouse gases is stored.

The El Niño is still being given a two-thirds chance of forming before the year is out, which bolsters the likelihood that 2014 will become the warmest year in the books.

Gavin Schmidt, the NASA GISS director, has cautioned against trying to find larger-scale meaning in the exact records of specific months, as the difference between first and second place can be very small and natural variability plays a large role from month-to-month and year-to-year.

Instead, he told Climate Central last month, the important trend to watch is the overall long-term picture of warming, which the recent “run of warm months” feeds into.