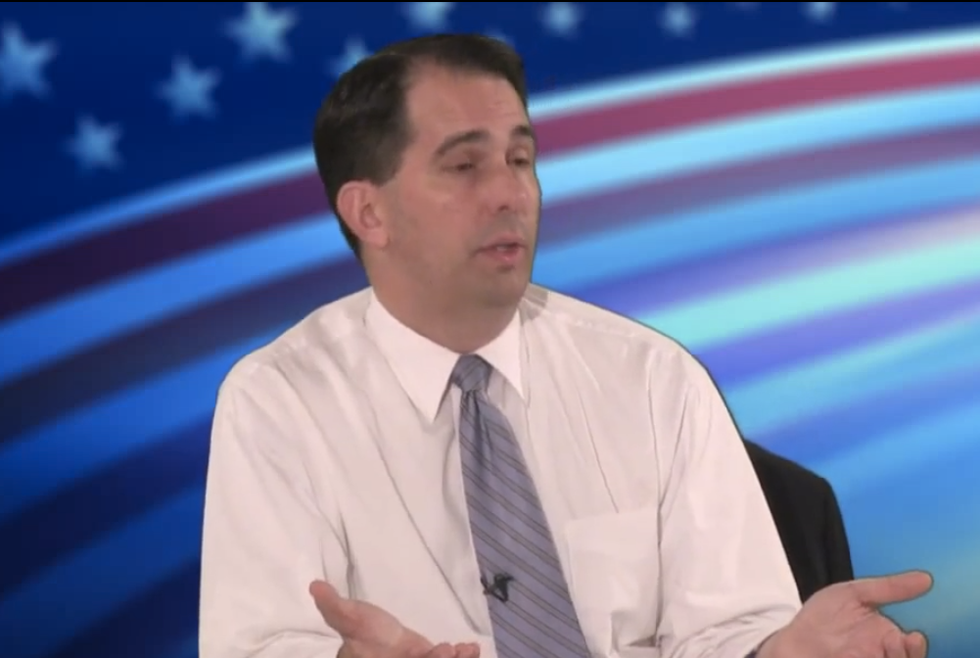 In a debate appearance last Friday, Wisconsin's Gov. Scott Walker (R) skirted the question of whether or not to raise the state's minimum wage.

In a column for the Milwaukee Journal-Sentinel, Daniel Bice questioned whether this means the governor is opposed to any minimum wage whatsoever.

In the debate against Democratic opponent, Walker answered a question about raising the minimum wage by saying, "I want jobs that pay two or three times the minimum wage. The way you do that is not by (setting) an arbitrary amount by the state.”

In a Tuesday meeting with the editorial board of the Journal-Sentinel, Bice asked Walker to clarify his position.

"You were asked if you thought someone could live on the minimum wage in the state," said Bice, "and you said we should try and come up with jobs that pay more than that."

"What is your position on the minimum wage?" he asked the governor. "Should we have one?"

"Well, I'm not going to repeal it," Walker said. "I don't think it serves a purpose because we're debating then what the lowest levels are at. I want the people, like I said the other night, to make two or three times that."

He went on to tout several companies that have located in Wisconsin which pay much higher hourly rates of pay than the minimum of $7.25 per hour.

When pressed for more details, Walker simply said that he supports higher wage jobs and wants more and more companies to base themselves in his state.

"There's all sorts of jobs out there" in skilled fields, Walker said. The trouble is finding workers with the skills necessary for the 21st century job market.

Walker's opponent -- Democratic challenger Mary Burke -- pounced on Walker's statements as evidence of his detachment from the hardships the population currently face.

"I disagree with it entirely,” Burke told Journal-Sentinel reporter Bill Glauber in response to Walker’s minimum wage comment. “It's important that people who are working fulltime are able to support themselves without government assistance. That's just sort of common sense.”

“I want to make sure people are able to have the pride of having a full-time job and supporting themselves,” Burke said.

Watch the video, embedded below via the Milwaukee Journal-Sentinel: