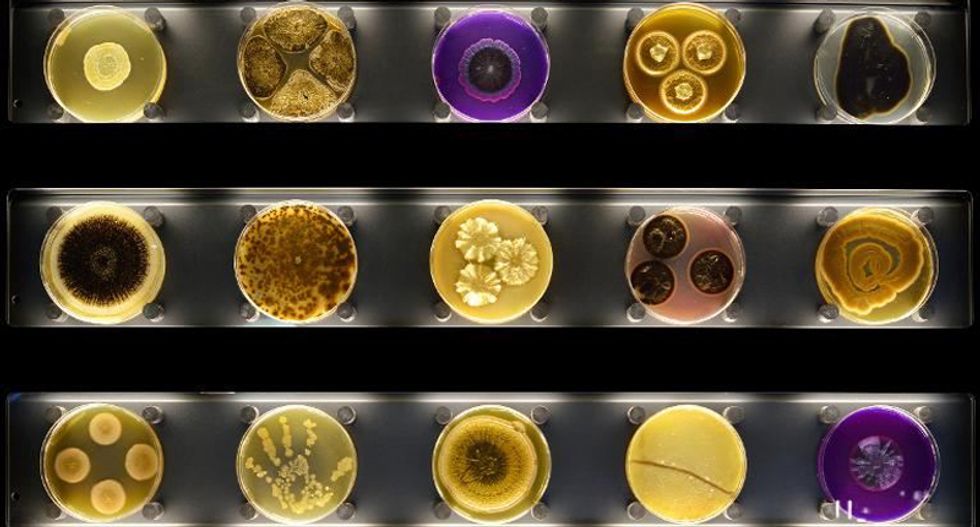 In this undated photo released by Micropia on September 30, 2014, Petri dishes are displayed with microbes growing in them, on display at Amsterdam's Micropia museum (AFP)

The world's first "interactive microbe zoo" opened in Amsterdam on Tuesday, shining new light on the tiny creatures that make up two-thirds of all living matter and are vital for our planet's future.

The 10-million-euro ($13 million) Micropia museum is next to Amsterdam's Artis Royal Zoo, whose director came up with the idea of exposing an array of living microbes in a "micro-zoo" 12 years ago.

"Today we want to display micro-nature," said Balian, who believes the importance of microbes in our daily lives has been underestimated ever since Dutch scientist Antonie van Leeuwenhoek observed the microscopic creatures in the 17th century.

Microbes are often associated with illness, through viruses, bacteria, fungi and algae, but they are also essential for our survival and will play an increasingly important role in humanity and the planet's future, Balian said.

"Microbes are everywhere. Therefore you need microbiologists who can work in every sector: in hospitals, food production, the oil industry and pharmaceuticals, for instance," he said.

They are already used to produce biofuels, develop new type of antibiotics and improve crop yields.

Experiments have shown their future potential for everything from generating electricity to strengthening building foundations and curing cancer.

"If we leave the science of microbiology in the dark for just a few experts, interest in it will never develop," Balian said.

"We want to show visitors how everything in nature is interconnected and how fundamentally microbes are part of that connection."

Each adult human body carries around 1.5 kilos (3.3 pounds) of microbes, and we would die without them.

- Microbes on eyes, in kisses -

Much of the museum -- which claims to be a world-first -- looks like a laboratory, complete with rows of microscopes connected to giant television screens.

Visitors can look through a window at a real-life laboratory where different kinds of microbes are being reproduced in Petri dishes and test tubes.

Step into a lift and look up to see an animation of a camera zooming on someone's eye, revealing the tiny mites that live on our eyelashes. The camera then zooms in on bacteria on the mite and finally on a virus on the bacteria.

Visitors can watch microbes reproduce under a 3D-microscope, especially designed and built for Micropia, or see a giant scale model of the Ebola virus that's ravaging west Africa.

A microbe scanner will instantly tell how many microbes live on a visitor's body and where.

Bolder visitors can try the "Kiss-o-Meter" and be told how many microbes are being transferred as a couple kisses.

"Did you know that, for instance, there are 700 species of microbes living in your mouth? Or 80 kinds of fungi on your heel?" Balian asked with a smile.

"A visit to Micropia will forever change the way you see the world," said Balian.