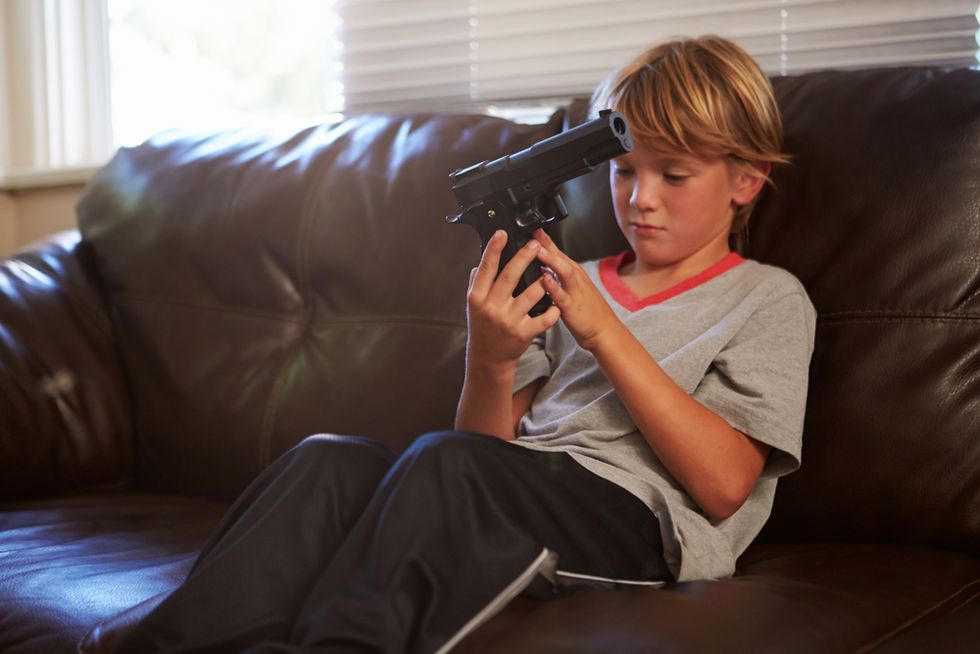 A Lake Stevens, Washington man whose 3-year-old son was shot in the mouth by a 4-year-old neighbor insists that his extensive gun collection is not to blame in the accident.

According to the Seattle Times, court records show that prior to the shooting, the boy's mother had made attempts to rein in her husband's excessive fondness for guns, saying that the copious number of weapons in the home constituted a health hazard to her and to their children.

However, the 46-year-old man -- who the New York Daily News identified as Jon Holzworth, a vocal online advocate of firearm ownership -- wrote to a judge last year insisting that he is a responsible man with a harmless hobby.

After Shirley Holzworth -- mother of victim Michael Holzworth -- sought a protection order for herself and her 18-month-old son in 2013, Jon Holzworth described himself in a letter to the court as a victim of “the current anti-gun political climate."

“I am an avid collector, and my hobby is no more dangerous than if I were to collect stamps,” Holzworth wrote.

Nonetheless, last Friday, his own son was seriously injured when playing with a neighbor boy who somehow got access to an unsecured weapon.

A spokeswoman for the Snohomish County Sheriff’s Office told the Times via email that someone in the home called at around 10:00 p.m. on Friday to report a child with a gunshot wound to the face.

The families of both boys are said to be cooperating in the investigation to determine what happened.

Everett, Washington's HeraldNet.com said that Shirley Holzworth filed for a protection order in January of 2013, but it was dismissed weeks later for insufficient evidence of domestic violence.

"[Jon Holzworth] was accused of shoving his wife, grabbing her arms and making threats over multiple occasions, including suicidal threats," said the report. Shirley Holzworth reportedly feared not only for herself and her son, but for her 12-year-old daughter, noting that her husband routinely left unsecured weapons lying around the house.

According to the Times, Jon Holzworth fought the allegations with accusations of his own, saying that Shirley was the irresponsible gun owner in the family and that he routinely kept all of his weapons securely stored in a locking gun cabinet.

Jon Holzworth filed for divorce not long after the order of protection was issued, but the divorce case was dismissed in October of this year due to lack of activity.

No charges have been filed in the incident, which is still under investigation. Previously in Washington state, in some cases where children have shot other children, criminal charges have been brought against the parents for leaving weapons within reach of minors.

It is a crime in all 50 states for adults to provide alcohol to underage children. However, according to the New York Times, fewer than 20 states have laws holding adults criminally liable for allowing underage children to have access to guns.