8-year-old watches officer brutally beat mom, smash her face into a table after reports of 'yelling' 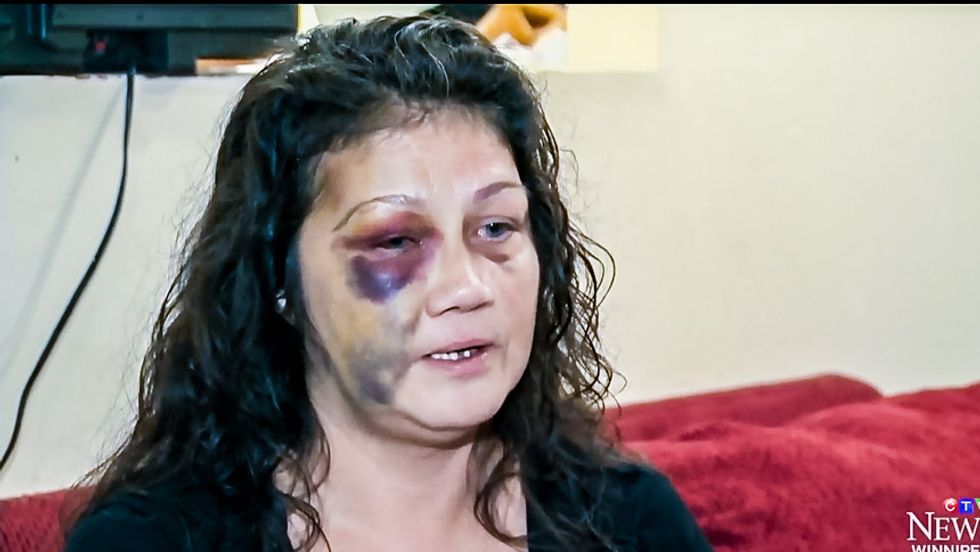 A Winnipeg woman said this week that she had filed a complaint after an officer beat her in her own home as her 8-year-old son watched.

Lana Sinclair told CBC that Winnipeg police officers showed up on Halloween night to investigate reports of "yelling." One officer spoke to her son, while another officer talked to her.

"He came up to me and poked me," Sinclair recalled. "I was sitting on a chair in the kitchen and I jumped up and said you don't need to touch me."

The officer pulled out a baton, and beat her with it, she explained to CTV. She said he then smashed her face into a work table, and into the floor.

"He had my arm behind me and he smashed my face right here," Sinclair said, pointing to her sewing table.

She said the officer handcuffed her, stood her up, and then kicked her feet out from under her. Sinclair hit the floor face first.

To make matters worse, she said her 8-year-old son watched then entire incident.

"We [my son and I] were both traumatized," Sinclair noted. "I just hug him and kiss him and tell him it's okay."

"All I was thinking of was his safety, and how he was going to be traumatized and how he is going to see the police now."

To stop the same thing from happening to someone else, Sinclair has filed a report with Canada's Law Enforcement Review Agency (LERA).

But LERA Commissioner Max Churley told CTV that only six of the hundreds of cases filed last year qualified for a hearing. Many of the cases were found to lack sufficient evidence or they were referred for criminal prosecution.

Winnipeg police chose not to comment on the allegations against the officer.