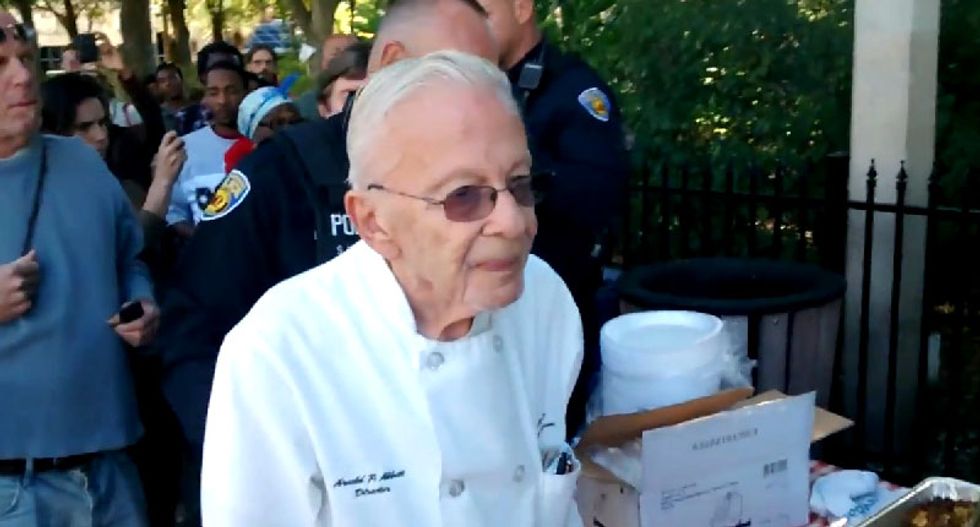 Two ministers and a 90-year-old homeless advocate in Fort Lauderdale, Florida, face up to 60 days in jail and a $500 fine for violating a city ordinance that effectively outlaws sharing food with homeless people in public.

Homeless advocate Arnold Abbott, head of the group Love Thy Neighbor, has been feeding the homeless for more than 20 years.

Abbott, along with pastors Dwayne Blackand and Mark Sims, were arrested on Sunday after distributing food to the needy on a public sidewalk.

"As contemplated on Sunday, I was arrested for feeding the homeless and received a citation to appear in court," Abbott explained on Facebook. "However, only 4 people were fed before an officer told me to, 'Drop that plate immediately!' As though it were a weapon I was holding, and to go with him to the police car. After a time I was allowed to get the food back on the van and we were able to find a small churches [sic] driveway, where we set up, and fed the people who followed us over."

The city commission voted Oct. 22 in favor of an ordinance that limits where outdoor feeding sites can be located, requires the permission of property owners and says the groups have to provide portable toilets, the Sun-Sentinel reported. The law took effect last Friday.

The new ordinance is part of a broader effort to deal with homeless people. The city has also made it illegal to sleep in public places downtown and to beg for money at major intersections. Commissioner Dean Trantalis told WLRN he doesn't think the new laws are mean-spirited, citing services the city also provides.

"I think that once the full story is out and people see the entire spectrum of services and initiatives in which the city is currently engaged, I think people will have a better understanding of our role in trying to help the homeless in our community," he said.

The city had previously tried to stop Abbott from feeding the homeless on Fort Lauderdale Beach in 1999. But Abbott challenged the city in court and won.

He said on Facebook that he plans to continue fighting the city over the feeding of homeless people.

"On Wednesday at 5:30 we will feed on the beach. When confronted by the police, which I expect will happen, I will present them with a copy of the court order of 1999 which allowed us to feed on the beach, without interference from the city," Abbott wrote. "It is my hope that they will honor that agreement but it is possible that they won't, alluding to the new agreement which scrapped the old one, and I could be arrested again."

Jillian Pim, a volunteer with Fort Lauderdale Food Not Bombs, says she plans to start a hunger strike to protest the new ordinance.

"I choose to go on hunger strike until this law is repealed or enforcement of it is stopped. I call on the people of Fort Lauderdale and everywhere else to demand that the Mayor, City Commission, Chamber of Commerce, Downtown Development Authority, and all other supporters of these homeless hate laws abandon the criminalization of poverty," she said.