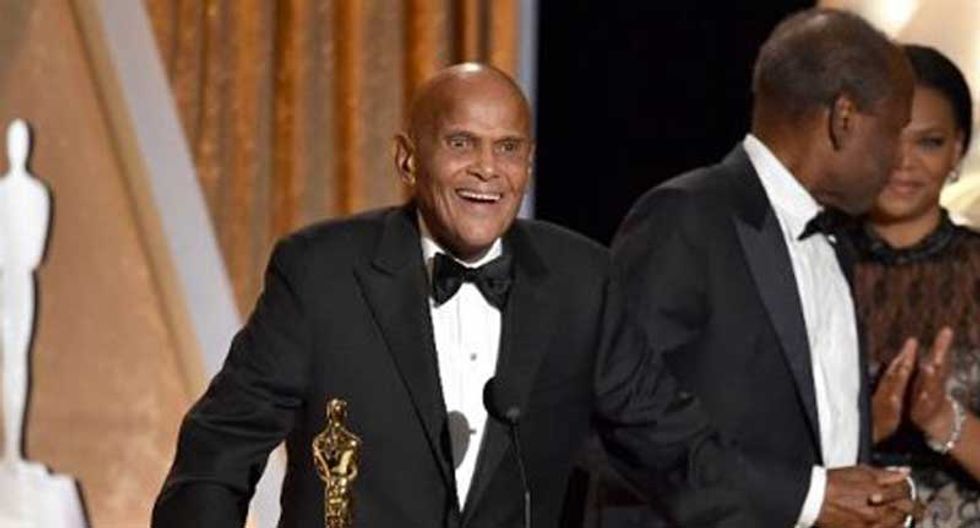 "Artists are the radical voice of civilization," the 87-year-old told the two-hour Governors Awards event in the Dolby Theatre, where the Oscars are held every year.

"I really wish I could be around for the rest of this century, to see what Hollywood does with the rest of the century. Maybe, just maybe, it could be civilization's game changer," he said.

Among those paying tribute to him was British director Steve McQueen, whose "12 Years a Slave" won the Best Picture Academy Award earlier this year.

"He basically took those powers of celebrity and fame, and used them for a bigger cause than just his own," McQueen told AFP.

Miyazaki, an artist, writer, director and producer, was nominated three times in the Academy's animated feature category, which he won in 2002 for "Spirited Away."

As a writer Carriere worked with iconic directors including Luis Bunuel, Volker Schloendorff, Jean-Luc Godard and Andrzej Wajda. He shared a screenwriting Oscar for the action short "Heureux Anniversaire" ("Happy Anniversary") in 1962.

O'Hara starred in "The Hunchback of Notre Dame" (1939) at the start of a long and wide-ranging career with films including drama "This Land Is Mine," family classic "The Parent Trap" and spy comedy "Our Man in Havana."

She was also in numerous westerns as a favorite of director John Ford.

When away from the spotlight, Belafonte spent much of his life campaigning for various causes such as education, famine relief, children, AIDS awareness and civil rights.

His films such as "Carmen Jones," "Odds Against Tomorrow" and "The World, the Flesh and the Devil" helped portray the injustices of racism and inequality.

He was an early supporter of the civil rights movement and marched alongside Martin Luther King, Jr in his heyday. He was also named a UNICEF goodwill ambassador in 1987.

Introducing Miyazaki, Walt Disney-Pixar animation guru John Lasseter paid tribute to the Japanese master, saying his films had "moved me, they've inspired me, and they've helped shape me as a filmmaker.

"Miyazaki is the most original artist ever to work in our medium," Lasseter added.

Carriere was introduced by director Philip Kaufman, who worked with him on 1988's "The Unbearable Lightness of Being."

Kaufman told an anecdote about a discussion over two characters in the film, played by Juliette Binoche and Lena Olin.

He and Carriere disagreed which woman they would prefer, but Kaufman said he had trouble explaining his point of view to Carriere. "Its not easy teaching something about sex to a Frenchman," he said.

O'Hara was introduced by fellow Irish actor Liam Neeson and veteran actor-turned-director Clint Eastwood -- who recalled his excitement at appearing in a scene with O'Hara in which she was naked on a horse.

"My fantasies were going really wild," he said, before recalling how an assistant director summarily ordered him off the set.

The annual event, which last year honored Angelina Jolie as the Jean Hersholt award winner, was attended by A-list stars including Robert Downey Jr, Keira Knightley and Benedict Cumberbatch, among others.