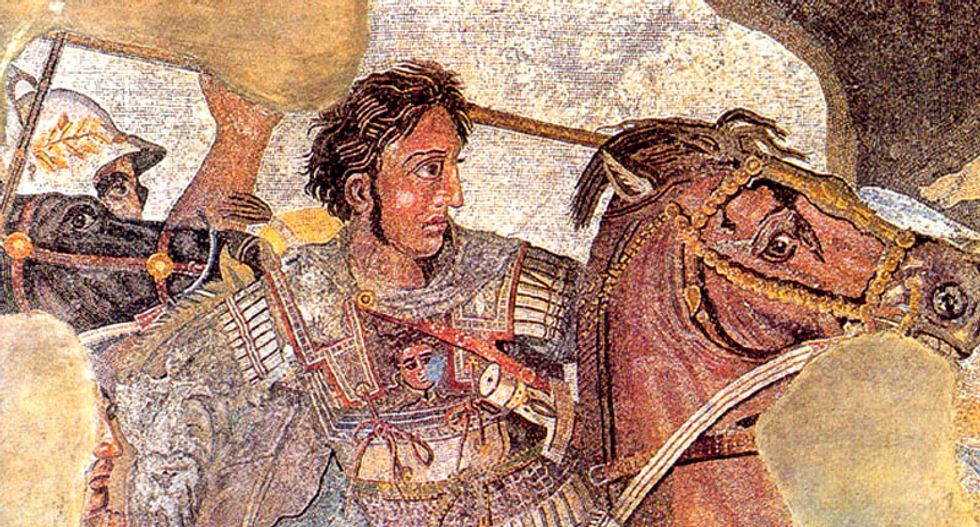 The Macedonian prime minister Nikola Gruevski’s love affair with statues began with Alexander the Great. In 2011, much to the consternation of Greece, Gruevski had the world’s largest sculpture of the warrior king installed in Skopje’s central square. Now, after peppering the capital with grandiose bridges, a gargantuan triumphal arch, concert halls, theatres, new government buildings and an assortment of artworks great and small, the premier has gone a step further.

Upping the ante in what has become one of the west’s more unlikely disputes, Gruevski instructed that waxworks of Alexander, his father, Philip II of Macedon, and his mother, Olympias, be given pride of place in a new archaeological museum. “All these exhibits … are of priceless value for our country and represent a part of our cultural heritage,” Gruevski pronounced as he opened the museum last month.

Built in the style of the Greek revival, the monumental edifice is the latest in an array of controversial works that have transformed the face of a city that even by the standards of communist-era former Yugoslavia was famously drab. Gruevski claims that the makeover – among the most ambitious in Europe, costing as much as €500m – will help lift the spirits of his countrymen. With nearly 30% of the nation out of work and more than a third living beneath the poverty line, Macedonians are among the poorest people in Europe.

But officials do not hide that the building project has another purpose: to score points in the long-running battle over the name of Macedonia. The Greeks have long argued that their neighbours’ desire to lay claim to the nomenclature – and use symbols associated with it – implies territorial ambitions over their own adjacent province of Macedonia. True to Balkan form, the row has its roots in ancient history.

In the 23 years since the landlocked state proclaimed independence, Alexander the Great has dominated the dispute. Athens says the Greek-born general is irrefutable proof of Macedonia’s Hellenic credentials; Skopje says he is an inherent part of local identity as the leader of an empire that, incorporating the region, extended as far as India.

As the imbroglio has intensified, Greece has blocked its neighbours’ bids to join Nato and the EU. Greek officials insist that the country be referred to internationally as the Former Yugoslav Republic of Macedonia, the provisional name with which it was admitted to the UN, even if it is formally recognised as the Republic of Macedonia, its constitutional name, by more than 130 states.

Gruevski’s decision to move the goalposts – just as Greek archaeologists are excavating a burial mound in northern Amphipolis that some believe could contain the tomb of one of Alexander the Great’s relatives – has inflamed passions on both sides of the border. Macedonians themselves are at odds over a scheme that many say not only smacks of megalomania but has turned Skopje into a mini Las Vegas.

“I don’t see why the Greeks should be offended. We are offended,” said Sasha Ordanoski, a political analyst and outspoken critic of Gruevski’s overtly nationalist policies. “Skopje has become the capital of kitsch in Europe in architectural and political style. The whole thing reeks of bad taste and has been a huge financial disaster. We both share the same territory of the historic empire of Alexander the Great and we have built the highest monument to Alexander in the world. If anything, Athens should be pleased.”

The Greeks are no less prone to politicking on the issue. A statue of Alexander on a steed – carved almost two decades before Macedonia’s own mounted warrior came to grace Skopje’s central square – has been hauled back to a warehouse because officials are undecided about which public space the sculpture should be erected in.

In Athens, politicians privately say the time is ripe to settle the dispute. A compromise solution of “Upper Macedonia” is among those thought to have been proposed by Greek officials. The UN has announced that envoys from the two states will meet in New York on Wednesday for a new round of negotiations.

But the omens do not look good. Skopje’s foreign minister, Nikola Poposki, declared before the talks: “We are further away from a solution than we were a few years ago.”