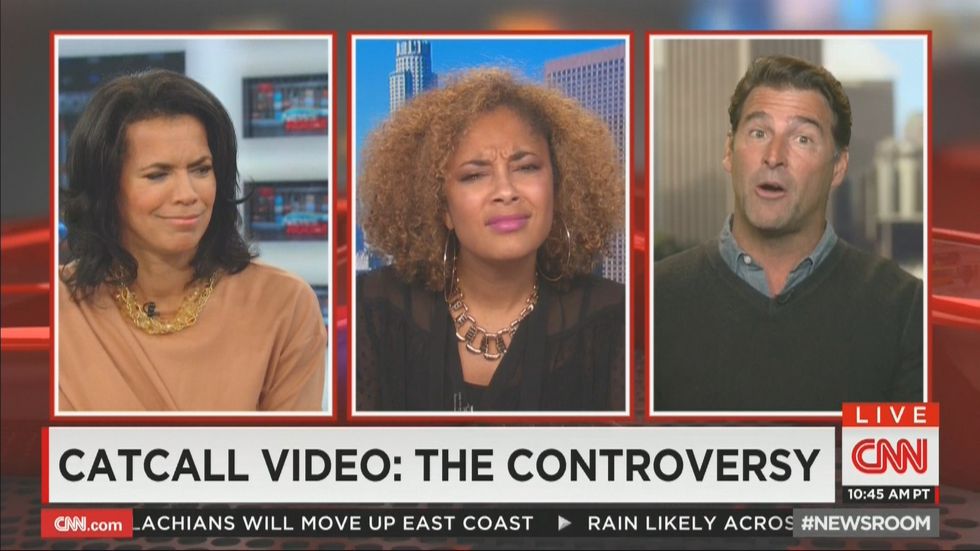 On Saturday, CNN Newsroom hosted a discussion of the now-infamous catcalling video in which a woman filmed herself getting catcalled and propositioned by men on the street more than 100 times over the course of 10 hours of walking in New York City.

"Women are expected, from the minute we leave the house, to be smiling and available for whatever men want to say to us," said Seales. "And don't get me wrong, 'Hello' is fine."

"I see you shaking your head," Seales said to him, "but you are not an expert in this because you are not a woman walking in the street, so you don't know."

"No, no," Santagati protested. "I'm more of an expert than you and I'll tell you why. Cos I'm a guy and I know how we think, more than you guys will ever know. I can't get in a woman's head any more than just like, uh, thinking about it."

"The bottom line is this, ladies," he went on, "you would not care if all these guys were hot. They would be bolstering your self-esteem, bolstering your ego. There is nothing more that a woman loves to hear than how pretty she is."

Whitfield and Seales wore almost identically bewildered, dubious expressions as Santagati continued, "Now, this particular video speaks for itself. These guys obviously don't have a lot of class, but I'm also very suspicious. This video was put together by an ad agency to go viral. How do we know some of those guys weren't planted?"

"It doesn't matter," said Seales. "Even if they were planted, this is very accurate."

"What's funny," she said, "is that you're saying that you know how men think, but actually your comment was about saying how women think, that women want to hear compliments from men all day. You are wrong."

Santagati went on to accuse feminists of having an "a la carte attitude" toward their liberation, where "You can do this, I want equ-, well, this sort of thing, but they take it too far. This thing bordered on, like, the boy who cried wolf. Where's it gonna go next?"

What if, he posited, he decides that for women to pass him on the street and not compliment him is abuse? What then?

Seales began to laugh and shake her head.

"What I'm saying is that he's wrong," she said. "The reality is that a lot of women, when we leave the house, we are not looking for compliments. We are not strolling the streets waiting, like, 'Is anyone gonna notice these pants today?' That's not actually how we are approaching our day. We are actually just going where we're going."

Watch video of the segment, embedded below via YouTube: