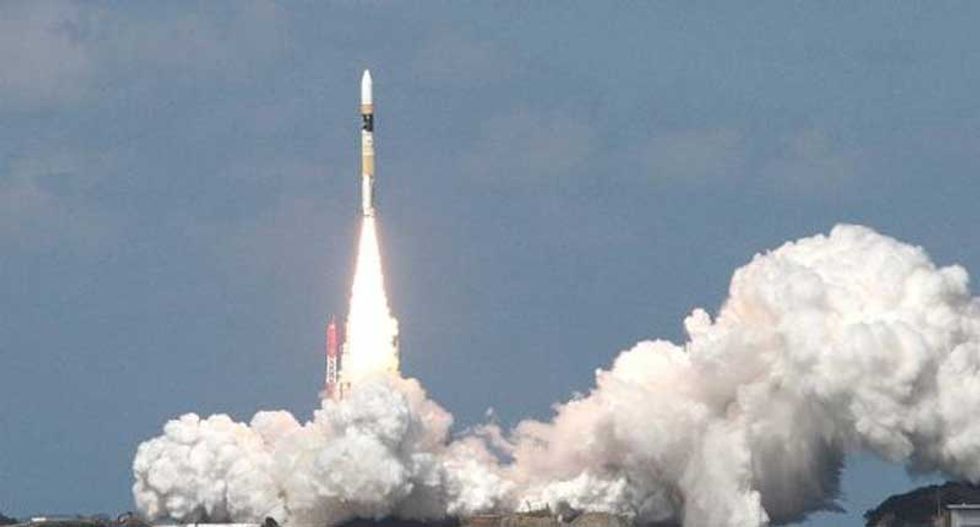 Bad weather will delay the launch of a Japanese space probe on a six-year mission to mine a distant asteroid, just weeks after a European spacecraft's historic landing on a comet captivated the world.

Hayabusa2 had been set to blast off aboard Japan's main H-IIA rocket from Tanegashima Space Center in southern Japan on Sunday.

But thick cloud expected over the weekend means scientists need to postpone the launch, a statement by the Japan Aerospace Exploration Agency (JAXA) said.

"The new launch day will be announced as soon as it is determined," it added.

The 31 billion yen ($260 million) project is sending a probe towards the unpoetically-named 1999 JU3 asteroid in deep space.

It will blast a crater in the asteroid to collect virgin materials unexposed to millennia of solar wind and radiation, in the hope of answering some fundamental questions about life and the universe.

"The asteroid is carbonaceous and we may find organic matter and water, the stuff of life," Hitoshi Kuninaka, project leader at the Japan Aerospace Exploration Agency (JAXA), said in an interview posted on the agency's website.

Analysing the extra-terrestrial materials could help shed light on the birth of the solar system 4.6 billion years ago and offer clues about what gave rise to life on Earth, he said.

Hayabusa2, about the size of a domestic refrigerator, is expected to reach the asteroid in mid-2018 and will spend around 18 months studying the surface.

In a galactic first, Hayabusa2 will drop an "impactor" that will explode above the asteroid's surface and fire a metal bullet into the crust at a speed of 7,200 kilometres (4,500 miles) an hour -- six times the speed of sound on Earth.

The bullet is expected to create a small crater that will enable the probe to collect material from the asteroid.

"The impactor is made fully with Japanese technologies that are so advanced you would think they are out of this world," said Kuninaka.

The Hayabusa2 mission will blast off just weeks after the European Space Agency succeeded in making mankind's first-ever landing on a comet this month.

Scientists said initial data sent from the robot lab Philae showed traces of organic molecules and a surface much harder than imagined.

Philae, released from its mothership Rosetta, has gone into hibernation on comet 67P/Churyumov-Gerasimenko, having used its onboard battery power after 60 hours of prodding and probing.

Engineers hope the lander's solar panels will charge its batteries in the coming months as the comet, with Philae hopefully still clinging to its surface, moves closer to the Sun.

If the Hayabusa2 mission goes well, pristine asteroid samples will be returned to Earth in late 2020.

JAXA aims to bring 100 milligrammes (1/286th of an ounce) of samples to Earth after a round trip of more than five billion kilometres.

The probe is the successor to JAXA's first asteroid explorer, Hayabusa -- the Japanese term for falcon -- which returned to Earth in 2010 with dust samples after a trouble-plagued seven-year mission.

The spherical 1999 JU3 asteroid, which is around a kilometre (half a mile) across, is believed to contain significantly more organic matter and water than the potato-shaped rock studied by the original Hayabusa.

Despite various setbacks during its epic seven-year odyssey, including intermittent loss of communication and damage to its motors, the first Hayabusa was hailed as a triumph of science when it returned to Earth.