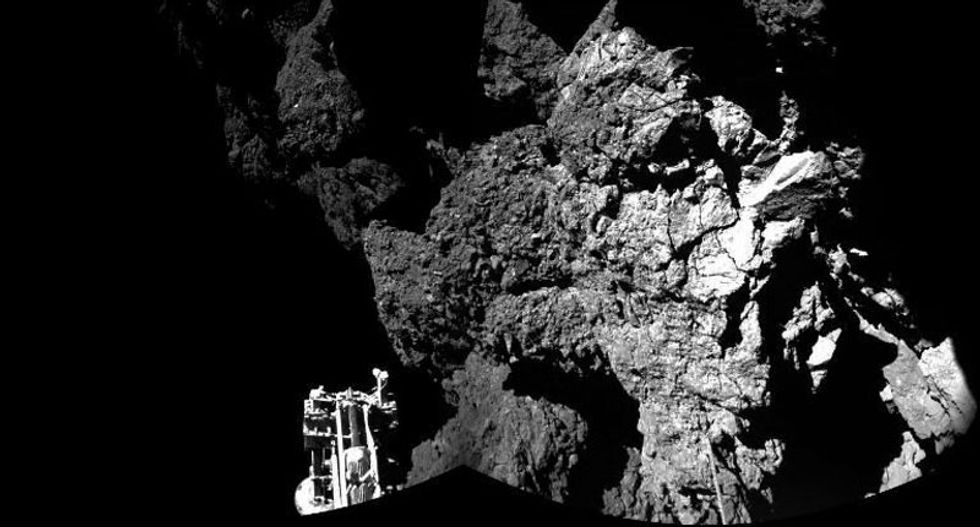 Robot probe Philae uploaded a slew of data to Earth Friday from a deep-space comet that it drilled into long after its onboard battery was feared to have died.

Data started streaming in as soon as late-night contact was reestablished between Europe's robot lab and its orbiting mothership Rosetta -- ending an anxious wait by mission controllers worried they might never hear from it again.

Philae's data collection from a comet travelling at 18 kilometres (11 miles) per second, currently at a distance of 510 million kilometres (320 million miles) from Earth, crowns a 10-year mission to study the origins of Solar System some 4.6 billion years ago, and maybe even life on Earth.

In the latest in a series of jaw-dropping achievements, the robot lab which landed in a dark ditch after a bouncy touchdown Wednesday, also managed to lift itself four centimetres (1.5 inches) and rotate its solar panels to absorb as much energy as possible to be stored for a possible wakeup later.

It was too late to recharge Philae's batteries sufficiently for an immediate life extension, and the lander was expected to go into hibernation very soon.

"So much hard work...getting tired... my battery voltage is approaching the limit soon now," said a tweet around midnight GMT.

But mission engineers hope they may be able to revive the lander for renewed contact in the coming months as the comet, with Philae still perched on its surface, moves closer to the Sun.

Philae landed Wednesday after a nail-biting seven-hour, 20-km descent from Rosetta, which had travelled more than a decade and 6.5 billion kilometres (four billion miles) to meet up with comet 67P/Churyumov-Gerasimenko in August this year.

The touchdown did not go entirely as planned, when Philae's duo of anchoring harpoons failed to deploy and it lifted off again twice.

The lander finally settled in a crevice in a location that remains a mystery, but data revealed it was shadowed from battery-boosting sunlight that could have extended its 60-hour core mission.

Among the most anticipated data from Philae is chemical analysis of a sub-surface drill sample which scientists hope will shed light on the origins of the Solar System 4.6 billion years ago, and maybe even life on Earth.

The ESA confirmed that Philae had drilled into the comet Friday, though it did not specify whether a sample had been obtained.

"I confirm that my (drill) went all the way DOWN and UP again!!" said a tweet in the robot's name. "First comet drilling is a fact!"

The lander and its mothership, which relays Philae's messages to Earth, have only two communications windows per day -- the last opened around 2130 GMT Friday.

Mission managers on Earth had to wait hours after the morning window closed to see whether the probe would have enough power from its fading 60-hour onboard battery to check in one last time.

The Rosetta-Philae team said Friday they were ecstatic with the results.

All 10 instruments on board the 100-kilogramme (220-pound) lab kicked into action, enabling Philae to send back the first-ever photos taken on a comet, and probed its surface density, temperature and composition.

The 1.3-billion-euro ($1.6-billion) mission aims to unlock the secrets of comets, which some astrophysicists believe may have "seeded" Earth with some of the ingredients for life.

Rosetta, with Philae riding piggyback, was hoisted into space in 2004, and reached its target in August this year, having used the gravitational pull of Earth and Mars as slingshots to build up speed.