Crash of SpaceShipTwo could set back space tourism by years 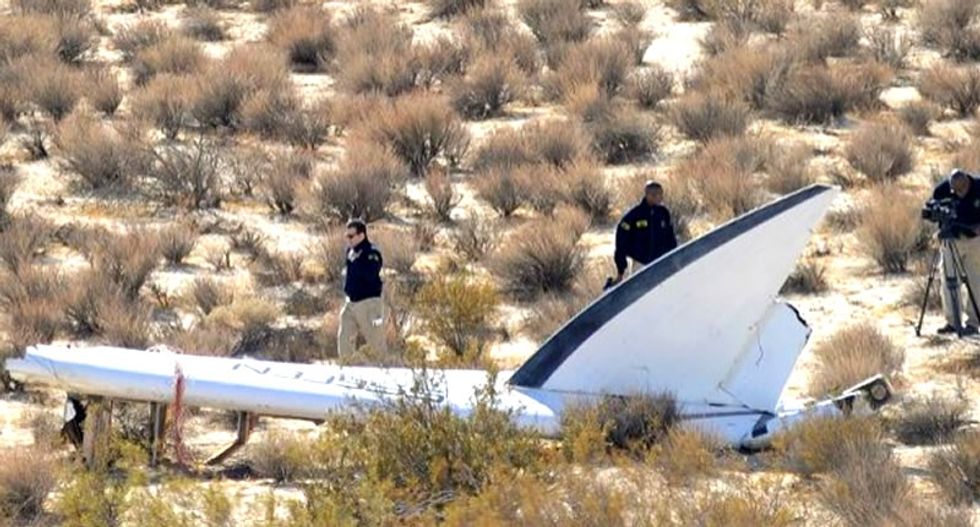 Authorities who Saturday carried out their first full day of investigation into a US spacecraft crash that killed one pilot and seriously injured another said probing the incident could take a year.

The on-site investigation work would last up to a week, he said, but the full probe piecing together the facts and analysis "will be probably 12 months or so."

British tycoon and Virgin chief Richard Branson meanwhile insisted earlier in the day that he was undeterred and that his dream of commercial space travel was still alive.

The doomed Virgin flight -- the 35th by SpaceShipTwo, which is meant to carry tourists on short but expensive trips to space -- marked the first time the spaceship had flown on a new kind of plastic-based rocket fuel mixture.

Hart earlier told reporters that investigators were entering unknown territory since it was "the first time we have been in the lead of a space launch that involved persons on board."

However, he noted that the test flight "was heavily documented in ways we don't usually see with normal accidents."

That included six cameras on the vehicle and three on WhiteKnightTwo -- the bigger aircraft that had carried the spaceship.

There was also extensive telemetry data and a long-range camera at nearby Edwards Air Force Base, among other sources of input, he said.

Friday's accident dealt a devastating setback to commercial space tourism. It was the second disaster to rock the private space industry in the space of a few days, after an Antares rocket carrying supplies to the International Space Station exploded after take-off in Virginia on Tuesday.

Early theories about the causes of the latest crash have focused on the fuel, amid reports the company was repeatedly warned of concerns about its safety.

A rubber-based fuel was previously used.

- Safety our 'number one priority' -

Speaking to reporters after arriving in the California facility that had served as the hub of Virgin Galactic's space program, Branson said safety remained his paramount concern.

"We owe it to our test pilots to find out exactly what went wrong, and once we've found out what went wrong, if we can overcome it, we'll make absolutely certain that the dream lives on," a grim-faced Branson told reporters.

"We do understand the risks involved, and we're not going to push on blindly," he said before meeting with grieving Virgin Galactic staff.

The surviving pilot, Peter Siebold, is now "alert and talking with his family and doctors," plane designer and builder Scaled Composites said in a statement.

It named the dead pilot as 39-year-old Michael Alsbury, a father of two.

SpaceShipTwo crashed and hurtled to the ground shortly after it had detached from a mothership at an altitude of around 45,000 feet (13,700 meters) during a test flight.

Experts say the accident will delay the advent of commercial space tourism by several years.

Virgin Galactic had hoped to start ferrying wealthy customers to the edge of space in 2015, charging $250,000 per person for a ticket on the company's six-seater vehicle.

Around 500 people, including a slew of celebrities such as Hollywood star Leonardo DiCaprio, have already reserved tickets on the first wave of Virgin Galactic flights, according to reports.

Branson said anyone who wanted to cancel their reservation would get their money back.

"Of course, anybody who ever wants a refund would be able to get a refund," he said.

Branson hit back at early theories surrounding what may have caused the accident.

"To be honest, I find it slightly irresponsible that people who know nothing about what they're saying can be saying things before the NTSB makes their comments," he said.

The accident was not the first tragedy to strike the Virgin Galactic program.

In 2007, three people were killed after a rocket designed for use in SpaceShipTwo exploded during testing.

Private companies are rushing to fill the gap left by NASA, which ended its 30-year shuttle program in July 2011 with a final Atlantis mission to the International Space Station.

Analysts said the latest accident is a huge blow to the nascent industry.

"You are not going to see any commercial space tourism flight next year or probably several years after that," said Marco Caceres, an analyst and director of space studies for the Teal Group consultancy.

In a memoir to be published next week, former Metropolitan Police Department officer Michael Fanone provided details about how he and other DC cops were treated by the powers that be after the Jan. 6 insurrection -- with the ex-cop particularly singling out Sen. Lindsey Graham (R-SC), House Minority Leader Kevin McCarthy (R-CA) and his own union bosses who he feels let him and his fellow officers down in the aftermath.

Following the insurrection that left Fanone hospitalized with a heart attack, the veteran cop has become the public face of the officers who battled with supporters of Donald Trump as they stormed the Capitol in an effort to stop the certification of the 2020 presidential election.

Does your dog like fine dining? Does your pooch like posh nosh? Then one US eatery has just the thing.

At Dogue in San Francisco, four-legged friends have their pick of the very best foods available, with a menu designed to please even the most exacting canine palate.

US President Joe Biden said Thursday the world risks nuclear "Armageddon" for the first time since the Cold War and that he is trying to find Russian President Vladimir Putin's "off-ramp" in the Ukraine conflict.

"We have not faced the prospect of Armageddon since Kennedy and the Cuban missile crisis" in 1962, Biden said at a Democratic party fundraising event in New York.