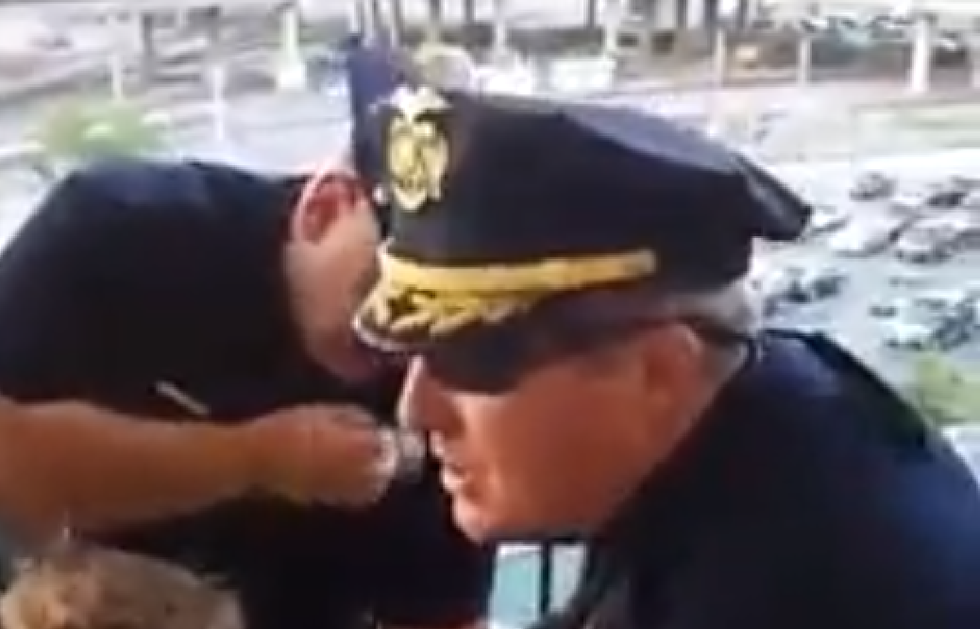 A police captain in Denver, Colorado was demoted this week after video of him repeatedly shoving a Colorado Rockies fan at Coors Field last July went viral.

According to Denver's Fox 31 TV, police officer Joe Black confronted Rockies fan Alex Buck and shoved him three times before putting him in handcuffs. The video went viral and on Wednesday, the Denver Police Department announced that Black was being demoted from the rank of captain to lieutenant.

Buck's coworker, Patrick Benson, who videotaped the confrontation with Black, said that officers confronted his friend over concerns about underage drinking in the park.

Black ordered Buck, 22, to sit down and when he did not comply, Black began to shove the man and berate him.

In video taken by Benson, Buck can be heard attempting to reason with the officer as Black yells, "Answer the question!"

As Buck -- who appears intoxicated -- tries to gather his thoughts, Black shoves him and shouts, "Sit down!"

Buck refuses and the confrontation escalates.

“All he had to do is shut up and we would have left,” says Black once Buck is handcuffed.

The Denver Police Department issued a 15-page disciplinary "reduction in rank" letter to Black, accusing him of inappropriate use of force and failure to fill out paperwork required of every officer who commits an act of violence on the job.

Black was at the center of controversy earlier this year when he snatched and destroyed a homeless man's sign that said, "Need weed." The officer was charged with violating the homeless man's First Amendment rights and suspended for four days.

Police Chief Robert White examined Black's record, including the attack on the homeless man, and determined that a demotion to lieutenant was in order.

Black's wife told the Denver Post that her husband is being treated unfairly.

“Joe has worked off duty for over 30 years and has never had one sustained complaint,” wrote Leslie Black in an email. “A two minute video doesn’t warrant a conviction when the altercation lasted 30 minutes. So, does everyone matter? Obviously not, since they don’t stand by their officers.”

Watch video of the confrontation, posted to Facebook by Patrick Benson and embedded below:

‘Rudy is really hurt’: Giuliani found out he’s been banned from Fox News the night before 9/11 anniversary

Rudy Giuliani and some other senior aides to Donald Trump have been banned from Fox News.

The former Trump lawyer and New York City mayor hasn't appeared on the conservative network for almost three months, but he learned of the ban the night before Sept. 11, when his scheduled appearance on "Fox & Friends" to mark the 20th anniversary of the terrorist attacks was cut and host Pete Hegseth called to apologize, reported Politico.